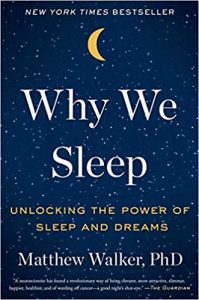 What you will learn from reading Why we Sleep:

– The role sleep plays in our bodily and mental recovery.

– What function sleep and dreams play in our wellbeing.

– What sleep deprivation will do to your body over time.

Why We Sleep Book Summary

Why We Sleep Book Summary is the ultimate guide to Sleep. This summary explores the two different types of sleep and their functions for your body. It also explains the detrimental effects of sleep deprivation and insomnia.

After reading you’ll want to make sure you’re getting as much sleep as possible.

First function is nursing our emotional and mental health. The second is problem solving and creativity.

REM sleep has helped recalibrate our emotional brains allowing for improvement as a collective. Humans can instantiate vast numbers of emotions in our brains and thereafter, deeply experience and even regulate these emotions.

REM sleep is used to dissolve emotion from experience. Divorcing the bitter emotional rind from informational rich fruit. We can therefore learn and usefully recall salient life events without being crippled by the emotional baggage that those painful experiences originally created.

REM – Emotional regulation, therapy overnight to deal with emotions and creativity by bashing past events into each other.

By removing REM sleep, we can quite literally removed people’s levelheaded ability to read the social world around them.

REM sleep in this respect provides emotional recalibration needed when growing up hence why the proportion grows as we get older.

The pre-adult brain learns to steer itself through the turbulent waters of a complex emotional world with autonomy.

Different from solidifying memories, which we now know is nREM’s job. REM sleep and the act of dreaming takes that which we have learned in on experience setting and seeks to apply it to others stored in memory.

REM sleep is vital for brain maturation increases as you get older.

REM sleep is like an internet service provider that populates new neighbourhoods of the brain with vast networks of fibre optic cables.

The emotional regions of the brain are up to 30 percent more active in REM sleep compared to when we are awake.

NREM sleep acts like a courier service, transporting memory packets from a temporary storage hold (hippocampus) to a more secure, permanent home (the cortex.) In doing so sleep is a major part in memory storage and formation.

Sleep is constantly modifying the information architecture of the brain at night. Even day time naps as short as tiny minutes can offer memory consolidation advantage as long as they contain enough nREM sleep.

Sleep deprivation in youth is worse than any other time. Sleep is important recovery mechanism.

The parts of our brain that ignite healthy deep sleep at night are the very same areas  that degenerate earliest or most severely as we age.

We all consistently underestimate the degree of performance disability when sleep impaired. People over time become acclimatised to their impaired performance level. People are unable to feel their lower mental aptitude, physical vitality and slow accumulation of poor health.

Sleep loss and alcohol create a dangerous effect on brain performance. Being awake early and staying out late has double effect.

It can shut down memory inbox (hippocampus) causing incoming information to be bounced. Blocking capacity for new learning.

If you don’t sleep the very first night after learning, you lose the change to consolidate those memories, even if you get lots of “catch-up” sleep thereafter.

Combine an increase in endcannabinoids with alterations in leptin and grhelin caused by sleep deprivation and you have a potent brew of chemical messages all driving you in one direction: overeating.

With a full night of sleep the pre-frontal cortex was strongly cooled to the amygdala, regulating this deep emotional brain centre with inhibitory control.

With this full night of sleep we have a balanced mix between our emotional gas pedal (Amygdala) and brake (prefrontal cortex).

Deep emotional centres in the brain just above and behind amygdala, called the striatum – asscosciated with impulsivity and reward, and bathed  by the chemical dopamine has become hyper-active in sleep deprived individuals in response to the rewarding and pleasurable experiences.

Sleep disturbance is a recognised hallmark associated with addictive substance use.

NREM in this respect can be seen as a nighttime power cleanse.

There is danger in generic interpretations that feel very personal and uniquely individual, yet scientifically hold no specifity whatsoever.

A lightbulb also produces heat. Heat is not the function of the lightbulb nor is the reason it was created. It is an unintended by-product of the operation. Heat is an epiphenomenon in this respect. Dreams like heat from a lightbulb were seen as serving no function, an unintended consequence. However, recent science seems to debunk this.

Need is not defined by that which is obtained but rather whether or no that amount of sleep is sufficient to accomplish all that sleep does. Therefore saying that whatever the tribes people were getting was all that humans need is flawed.

Recurisve loops of emotional programs, together with retrospective and prospective memory loops, keep playing in the mind, preventing the brain from shutting down and switching into sleep mode.

Over-active flight or fight responses. – Training to stop this.

The degree to which evening electric light winds back your internal twenty-hour clock is important: usually two to three hours each evening on average.

Artificial evening light, even that of modest strength will fool your suprachiasmatic nucleus into believing the sun has not yet set.

Artificial evening and nighttime light can therefore masquerade as sleep-onset insomnia – the inability to begin sleeping soon after getting into bed.