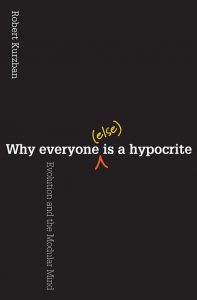 Why Everyone (Else) Is a Hypocrite Book Summary – Robert Kurzban

– That our brains are designed to be useful not right and why that matters.

– Why everyone is a hypocrite including yourself.

– Why our brain is an effort meter and how we can use that knowledge to beat procrastination.

Why Everyone (else) is a hypocrite book summary:

Why Everyone (else) is a hypocrite book summary explores the evolutionary routes of hypocriticism. Why is it that some people offer advice that they themselves are guilty of.

The main thesis from Author Robert Kurzban is that our brain was designed to be useful, therefore we should judge behaviour through it’s use in solving human problems.

One our main evolutionary problems is convincing others you are worth knowing. This pays back in a few ways, most notably being someone worth knowing means you will have a tribe and hence more likely to survive.

This is why we always create pro-social reasons for acting when questioned. Even if we act impulsively or selfishly we will foster a rational unselfish reason. (See The Elephant in the Brain Book Summary for further exploration)

A module is an information-processing mechanism that is specialised to perform some function.

Organisms designed to survive and reproduce have various parts that work in service on this goal.

Whether you’re talking about human tools or biological machines, to the extent there is a problem whose solution has regularities, an efficient solution to that problem will embody those regularities, making the mechanism specialised for the task and efficient in solving the problem.

Restricted information flow among the Brains modules (informational encapsulation) explains why brains can contain inconsistencies. If two different systems are designed for input from different source, and there’s no overarching purge of inconsistencies then contradictions can remain.

A Module Example – The PR Module:

One modular system in the mind is the press secretary, designed to communicate with other people in Machiavellian fashion. We present versions of ourselves that are socially acceptable. Kurzban argues that we view we have of ourselves is based on explanatory fictions.

So, to the extent there’s a “you” it turns out that “your” job is public relations.

It is reasonable to think that in human evolutionary terms what people say and do provided a large part of the information content for evaluating others. People use the way others act and what they belief to figure out if that person is worth knowing.

Therefore, persuading others that you are valuable is an important even crucial adaptive problem for humans. It is therefore reasonable to expect that our brains would be designed both to make ourselves valuable and demonstrate our value.

Hence the creation of the PR system. We generate reasons (pro-social) to explain behaviour we have already made.

Thomas Schelling writes in ‘The Strategy of Conflict’ – “genuine ignorance can be an advantage to a player if it is recognised and taken into account by an opponent” What he means by this is because we are all conscious of others reasons playing dumb actually counts as a reason. We can play dumb or ‘ignorant’ to avoid people thinking we are acting out of selfishness.

Ignorance or having the wrong facts is best when having correct information makes your available options less desirable then when you didn’t have the correct information. That is, in those cases, accurate knowledges with others knowing you know is negative to you.

Ignorance when the payoffs aren’t social is generally a bad thing.  Ignorance is at its most useful when it’s most public.

Roy Baumeister says “Self-presentation is … the result of a trade off between favourability and plausibility”.

Press secretary modules should be designed to cause people to behave in a way that sends out the most positive defensible message about your worth, history and future.

We need to keep it possible to maintain a set of representations designed for public consumption, to maintain the most positive possible information about ones traits and abilities and keep unfavourable representations “walled off” to be used only when necessary, that would be the best of all possible worlds.

Strategically wrong – convincing someone something that’s intrinsically hard to know.

Selective memory mechanisms – more likely to remember events that suggest we have positive traits. Events that cast shadows over us are apparently more likely to be ejected from memory or difficult to recall.

Your Brain was Designed to be Useful not correct:

Being wrong isn’t going to be useful because it makes you feel better for a simple reason: evolution doesn’t care how happy you are.

Marvin Minksy – “if we could deliberately seize control of our pleasure systems, we could reproduce the pleasure of success without the need for any actual accomplishment. And that would be the end of everything”

A brain is designed to be useful. Face the pain. It is telling you something.

We shouldn’t think of preferences as being things that are recorded in people’s heads. Decision are the results of the operation of different sub routines of the line being brought to bear on individual decision problems.

What are ‘framing effects’ are likely due in part to the fact that superficial differences between problems recruit different modules. E.g. saving lives versus losing lives.

The strength of preferences depends on important elements of the persons history and context.

Our brain is an effort monitor:

Willpower debunk – the mind is an information processing device not a hydraulic machine that runs out of water pressure.

Changes in complex behaviour are due to changes in information processing.

You’re brain acts as more of an effort monitor. –

I’m constantly re assessing the effort it will take. You sub consciously add up opportunity costs so it’s not willpower that’s exhausted, it’s the ratio of costs to rewards is to high to justify continuing.

Effort and reward orientated, if we don’t see or perceive a reward for our efforts we don’t bother.

Baumeister “It is adaptive to give up early on unsolvable problems. Persistence is after all only adaptive and productive when it leads to eventual success.”

Different modules are used for action and speaking, which leads to hypocrisy:

Condemnation and conscience are caused by different modules, it is no wonder that speech and action often conflict. Taken together, these ideas make it clear that the modular design of the human mind guarantees hypocrisy.

The Modules of Morality:

Moralistic modules act to constrain others behaviour. At the same time, other modules advance our own fitness interests, often by doing the very same acts as our moral modules condemn.

Morality can be views as informal equivalent of a justice system. I’ll agree to rules that specify that I can be punished for various deeds, but only as long as everyone else is subject to the same rules.

Different modules will be more or less active depending on the context, one’s state and one’s history, these decisions might well not be mutually consistent.

Thought to end with: