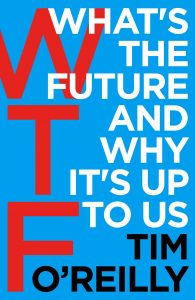 What you will learn from reading What’s the Future:

– Why nothing lasts forever and why we should always compare the way things worked with way they work now.

– Why it’s important to look at patterns and what scenarios repeat themselves throughout history.

– Why looking for technologies at the fringes can identify the next big opportunity.

What’s the future is a book all about the future and what’s in store for us all.

In this book Tim turns his eye to the future – and asks the questions that will frame the next stage of the digital revolution:

“The map is not the territory” – Alfred Korzybski

Maps change as the environment changes. Make sure to always compare old maps to the new maps.

“A theory is a species of thinking, and it’s right to exist is co-extensive with its power of resisting extinction by its rivals.”

When you begin to sit in the mapmakers seat rather than taking the existing map as an accurate reflection you see more opportunities.

Beware of the world of labels which contain pre-associated value judgements and assumptions. It’s important to look though the labels and look at the underlying reality.

Tim encourages us to look for repeating patterns and look for what the next iteration might be. For example: “winner takes all” monopolies tend to repeat. Throughout history monopolies are created and destroyed. The winner take all seems to be a common trait across the animal kingdom.

Every time you use software you can be referred to as a ‘beta tester’ as you are continually trying unfinished, continuously evolving software and giving feedback at a scale never seen before.

Open source programs evolve as much as they are designed. “Evolution breeds not a single winner but diversity”

People make the future happen, individual decisions matter. What are repercussions of these decisions?

The future is already here:

“The future is already here. It’s just not evenly distributed yet.”

Look for technologies at the fringes and then think if they are adopted by the mainstream to see the future.  Find the seeds of the future, study them and yourself how things will be different when they are the norm.

The conservation of profits:

Example:
IBM’s commoditisation of the basic design of the personal computer led to ‘attractive profits’ up the stack in software, with further fortunes being made up the stack from the commodity of open source software that underlies the internet in a new class of proprietary applications.

Hoffman’s law – Every year technology products cost less and do more. Drivers of progress show us important vectors. Sensors have become key to next generation of applications such as self driving cars and GPS.

There are usually a paradigmatic group of companies that best exemplifies the next wave of technology. “Unpacking” the lessons of these companies can help draw your map of the future.

Software has allowed the Augmentation of  workers: You can find new ways to augment workers, giving them new skills and access to new opportunities. Workers can do more with less and repetitive tasks can be automated.

How can we augment people?

When you draw a new map successfully enough, you change the perception of not only the future but the past.

Example of new paradigms effecting the past:

Horses seem silly in retrospect after invention of cars.

Likewise, universities will become a silly idea in retrospect. £36,000 of debt for what? The information is commoditised and can be found online for free. You are essentially paying for a certificate.

Pioneers and finding a treasure map:

To be a pioneer you must question what already exists.

Once someone pushes a boundary there is a huge opportunity for a fast follower. Using differentiation can be effective here, as you carve your own path.

While everyone else is seeing old map, entrepreneurs see new map, which helps foster their creativity. This is another way of saying reasoning from first principles. Entrepreneurs realise maps have hidden treasures to find where people aren’t looking.

Look for growing pains for signals of change:

Keynes: “We are suffering, not from the rheumatics of old age, but from the growing-pains of over-rapid changes, from the painfulness of re-adjustment between one economic period and another.”

Avoid assuming and begin with end in mind:

The promise of final product is where everything starts. Create mock-ups of customer experience and write “frequently asked questions”. Set expectations first. Think in promises.

A company is a hybrid organism made of people and machines.As Peter Thiel argues in Zero to One – machines won’t replace people but augment them.

You need to understand your business model intricately:

You can tell if a business model map is good if it helps a company to make sound strategic choices.

That is, it frames the problem in such a way that a company can make conscious choices about what’s important, rather than discovering too late that it broke a key part of what had made it successful.

Part 3: A world ruled by algorithms

“We shape our tools, and thereafter our tools shape us.” Marshall McLuhan his works summarised by John Culkin

Too often incentives and outcomes are not aligned.

The essence of algorithm design isn’t to eliminate all error, but make it robust in the face of errors.

The more complex the regulation the more fragile it is to changes in conditions.

Privacy bullies are ones who utilise data in unfair ways such as charging certain areas more due to higher income bracket.

Goodhart’s law – Targeting any variable long enough undermines the value of the variable.

Example – Measuring sales revenue can lead to salesman overpromising in order to improve the score.

The master algorithm of shareholder capitalism whose fitness function both motivates and coerces companies into pursuit of short term profit.

The result: As increasing amount of money is placed investment, it isn’t placed elsewhere. As the financial products are all about strip-mining value others are getting short changed.

Macro Social Change because of clashes in incentives: People were encouraged to purchase on credit when their incomes stagnated. Which is potentially the worlds biggest scam, encouraging those who should cut back spending to spend more on things they don’t need.

If you have super money you can operate at a loss for years. Think Uber.

Companies should have an economic impact reward to check they aren’t taking more value than they create.

Resisting proxies – one of the traps that lead to day 2 is you stop looking at outcomes and start just making sure you are doing the process right.

Steve Jobs used to ask why are we doing what we are doing, question the process from time to time.