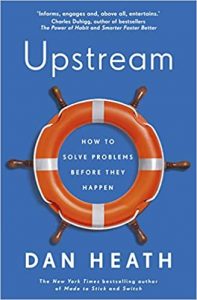 What you will learn from reading Upstream:

– The three barriers to upstream thinking and what this means for you.

– How to integrate upstream thinking into your life.

Like all Heath brother books Upstream is a masterclass in distilling hard concepts into practical advice and insights. This time Dan heath explores ‘upstream’ thinking which is metaphorical for problem prevention.

As Benjamin Franklin said “an ounce of prevention is worth a pound of cure”. If you’re interested in solving problems at there root or before they even happen then this is the book for you.

That’s one reason why we tend to favor reaction: Because it’s more tangible. Downstream work is easier to see. Easier to measure. There is a maddening ambiguity about upstream efforts.

There are knotty problems that upstream leaders must untangle. How can you detect problems before they occur? How can you measure success when success is defined as things not happening?

To succeed upstream, leaders must: detect problems early, target leverage points in complex systems, find reliable ways to measure success, pioneer new ways of working together, and embed their successes into systems to give them permanence.

The world hasn’t gathered enough evidence (let alone mustered the will) to pick the right point on the “stream” for crime—or, for that matter, on the stream of almost any major problem. While we have a wide spectrum of available options to address the world’s problems, we’ve mostly confined ourselves to one tiny stretch of the landscape: the zone of response. React, react, react.

The need for heroism is usually evidence of systems failure. Success comes when the right things happen by default—not because of individual passion or heroism.

Focus is both strength and weakness:

Mark Okerstrom, who was Expedia’s CFO in 2012 and became CEO in 2017, said, “When we create organisations, we’re doing it to give people focus. We’re essentially giving them a license to be myopic. We’re saying: This is your problem. Define your mission and create your strategy and align your resources to solve that problem. And you have the divine right to ignore all of the other stuff that doesn’t align with that.”

Okerstrom’s point is that focus is both the strength and the weakness of organisations. The specialisation inherent to organisations creates great efficiencies. But it also deters efforts to integrate in new, advantageous ways. In upstream ways.

Focus is both an enemy and an ally. It can accelerate work and make it more efficient, but it puts blinders on people.

The Three Barriers To Upstream Thinking

The first force, problem blindness, means: I don’t see the problem. (Or, This problem is inevitable.) A lack of ownership, though, means that the parties who are capable of addressing a problem are saying, That’s not mine to fix.

Pro athletes play hard. Injuries are gonna happen. You can’t change that. That mind-set is an example of what I’ll call “problem blindness”—the belief that negative outcomes are natural or inevitable. Out of our control. When we’re blind to a problem, we treat it like the weather.

To reclassify the coercive treatment of women as something abnormal—to attach a stigma to it. She helped society awaken from problem blindness by giving the problem a name.

A lack of Ownership:

The crisis may come, but not today. The psychologists Eldar Shafir and Sendhil Mullainathan, in their book Scarcity, call this “tunneling”: When people are juggling a lot of problems, they give up trying to solve them all.

People who are tunneling can’t engage in systems thinking. They can’t prevent problems; they just react. And tunneling isn’t just something that happens to poor people—it can also be caused by a scarcity of time.

How do you escape the tunnel? You need slack. Slack, in this context, means a reserve of time or resources that can be spent on problem solving.

Date for learning vs Data for inspection:

He’ll ask them, What are your priorities when it comes to data and measurement? “And I never hear back ‘It’s important to set up data systems that are useful for people on the front lines.’ Never,” he said. “But that’s the first principle!

“Data takes you away from philosophical insights. You move away from anecdotal fights about what people think is happening to what is happening,” she said. “You can’t solve a dynamic problem with static data.”

How will you unite the right people?

Start with Sigfúsdóttir’s insight: Each one of them gets a role.

Simply by changing the way they collaborated, and the goals that guided their collaboration, their efforts became dramatically more effective.

How Will You Change the System?

Remember this quote: “Every system is perfectly designed to get the results it gets.”

Upstream work is about reducing the probability that problems will happen, and for that reason, the work must culminate in systems change.

Their solution? They started printing images of flat-screen televisions on the side of their shipping boxes, which are very similar in shape to flat-screen TV boxes. Damaged goods were reduced by 70% to 80%.

A group of people unite around a common cause and they demand change. But a spark can’t last forever. The endgame is to eliminate the need for courage, to render it unnecessary, because it has forced change within the system.

Where Can You Find a Point of Leverage?

“As you think about a system, spend part of your time from a vantage point that lets you see the whole system, not just the problem that may have drawn you to focus on the system to begin with,” wrote Donella Meadows in an essay.

How Will You Get Early Warning of the Problem?

When we can foresee a problem, we have more maneuvering room to fix it. That’s why a key question bearing on upstream efforts is: How can you get early warning of the problem you’re trying to solve?

As we design early-warning systems, we should keep these questions in mind: Will the warning give us enough time to act effectively? (If not, why bother?) What rate of false positives can we expect?

How will we measure success?

A question that bedevils many upstream interventions is: What counts as success?

Downstream efforts restore the previous state. My ankle hurts—can you make it stop? My laptop broke—can you fix it? My marriage is struggling—can you help us get back to the way we were? In these situations, there’s not much conceptual handwringing about what constitutes success.

How Will You Avoid Doing Harm?

Upstream interventions tinker with complex systems, and as such, we should expect reactions and consequences beyond the immediate scope of our work.

“Remember, always, that everything you know, and everything everyone knows, is only a model,” said Donella Meadows,

Hackbarth’s point is that we don’t succeed by foreseeing the future accurately. We succeed by ensuring that we’ll have the feedback we need to navigate. To be clear, there absolutely are some consequences we can and should foresee.

We need to settle for a pretty good solution that’s equipped with so many built-in feedback loops that it can’t help but get better over time.

Who Will Pay for What Does Not Happen?

That’s an example of what’s called the “wrong pocket problem”: a situation where the entity that bears the cost of the intervention does not receive the primary benefit. One pocket pays, but the returns are scattered across many pockets.

Paying for upstream efforts ultimately boils down to three questions:

Where are there costly problems?

Who is in the best position to prevent those problems?

And, how do you create incentives for them to do so?

Other times, the inventions are a mixed bag: guns, the automobile, air conditioning, Twitter. We never really know in advance what these technologies will yield, whether they will be mostly good or mostly bad. We just fumble our way forward and deal with the consequences.

There’s a concept called “the prophet’s dilemma”: a prediction that prevents what it predicts from happening. A self-defeating prediction. What if Chicken Little’s warnings actually stopped the sky from falling?

Be careful of the 3 Ghost Victories:

Because there is a separation between (a) the way we’re measuring success and (b) the actual results we want to see in the world, we run the risk of a “ghost victory”: a superficial success that cloaks failure.

In the first kind of ghost victory, your measures show that you’re succeeding, but you’ve mistakenly attributed that success to your own work. That first type of ghost victory reflects the old expression “A rising tide lifts all boats.”

And the third is that your short-term measures became the mission in a way that really undermined the work. There is also a third kind of ghost victory that’s essentially a special case of the second. It occurs when measures become the mission. This is the most destructive form of ghost victory, because it’s possible to ace your measures while undermining your mission.

When people’s well-being depends on hitting certain numbers, they get very interested in tilting the odds in their favor.

They used what Andy Grove, the former CEO of Intel, called “paired measures.” Grove pointed out that if you use a quantity-based measure, quality will often suffer.

Grove made sure to balance quantity measures with quality measures. The quality of cleaning had to be spot-checked by a manager; the number of data-entry errors had to be assessed and logged.

The “rising tides” test: Imagine that we succeed on our short-term measures. What else might explain that success, other than our own efforts, and are we tracking those factors?

The lazy bureaucrat test: If someone wanted to succeed on these measures with the least effort possible, what would they do?

The defiling-the-mission test: Imagine that years from now, we have succeeded brilliantly according to our short-term measures, yet we have actually undermined our long-term mission. What happened?

That’s the spirit of upstream thinking: With some forethought, we can prevent problems before they happen, and even when we can’t stop them entirely, we can often blunt their impact.

And that’s how upstream victories are won. An inch at a time, and then a yard, and then a mile, and eventually you find yourself at the finish line: systems change. Be impatient for action and patient for outcomes.

Macro starts with micro. When we think about big problems, we’re forced to grapple with big numbers. What would it take to solve problems for 1,000 people?

To be clear, it’s possible to have the best of both worlds. You can use the Pill Model to establish that an intervention works but, when it comes time to scale it, people should be encouraged to tweak it (not discouraged from changing the formulation).

If you’re looking for a place to contribute your talents, favor Scoreboards over Pills. Don’t obsess about formulating the perfect solution before you begin your work; instead, take ownership of the underlying problem and start slogging forward.