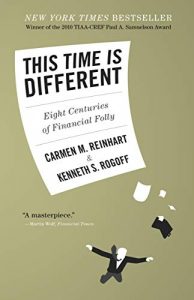 What you will learn from reading This Time is Different:

– Why inflation can be perceived as effectively defaulting on debt.

– How to define the different types of financial crises.

– Why this time is not different and how financial folly is always going to repeat itself.

This Time is Different Book Summary:

This Time Is Different explores a variety of financial crises across eight centuries of government defaults, banking panics, and inflationary spikes. Starting with medieval currency debasements to today’s subprime catastrophe. The scope and perennial nature of financial crises is slightly disturbing.

Carmen Reinhart and Kenneth Rogoff are leading economists whose work has had influence over policy concerning future financial crisis. The overall point of this book is simple, this time is not different, financial catastrophes are universal rites of passage for emerging and established markets.

The Overall Premise of Financial Crises:

If there is one common theme to the vast range of crises we consider in this book, it is that excessive debt accumulation, whether it be by the government, banks, corporations, or consumers, often poses greater systemic risks than it seems during a boom.

Infusions of cash can make a government look like it is providing greater growth to its economy than it really is. Private sector borrowing binges can inflate housing and stock prices far beyond their long-run sustainable levels, and make banks seem more stable and profitable than they really are. Such large-scale debt buildups pose risks because they make an economy vulnerable to crises of confidence, particularly when debt is short term and needs to be constantly refinanced.

Debt-fueled booms all too often provide false affirmation of a government’s policies, a financial institution’s ability to make outsized profits, or a country’s standard of living. Most of these booms end badly. When debt-fueled asset price explosions seem too good to be true, they probably are. But the exact timing can be very difficult to guess, and a crisis that seems imminent can sometimes take years to ignite.

Highly indebted governments, banks, or corporations can seem to be merrily rolling along for an extended period, when bang!-confidence collapses, lenders disappear, and a crisis hits.

Unexpected increases in inflation are the de facto equivalent of outright default, for inflation allows all debtors (including the government) to repay their debts in currency that has much less purchasing power than it did when the loans were made.

Following the rise of fiat (paper) currency, inflation became the modern-day version of currency “debasement, the systematic degradation of metallic coins that was a favoured method of monarchs for seizing resources before the development of the printing press. To measure inflation, we generally rely on consumer price indexes or their close relative, cost-of-living indexes.

The After Effects of Banking Crises:

Banking crises almost invariably lead to sharp declines in tax revenues as well as significant increases in government spending (a share of which is presumably dissipative). On average, government debt rises by 86 percent during the three years following a banking crisis. These indirect fiscal consequences are thus an order of magnitude larger than the usual costs of bank bailouts.

Banks traditionally borrow at short term. That is, they borrow in the form of deposits that can be redeemed on relatively short notice. But the loans they make mostly have a far longer maturity and can be difficult to convert into cash on short notice. For example, a bank financing the expansion of a local hardware store might be reasonably confident of repayment in the long run as the store expands its business and revenues. But early in the expansion, the bank may have no easy way to call in the loan. The store owner simply has insufficient revenues, particularly if forced to make payments on principal as well as interest.

A bank with a healthy deposit base and a large portfolio of illiquid loans may well have bright prospects over the long term. However, if for some reason, depositors all try to withdraw their funds at once-say, because of panic based on a false rumour that the bank has lost money gambling on exotic mortgages-trouble ensues.

In periods with much lower average inflation rates and little expectation of high inflation, much lower inflation rates could be quite shocking and traumatic to an economy-and therefore considered crises. Thus, in this book, in order to meaningfully incorporate earlier periods, we adopt an inflation crisis threshold of 20 percent per annum.

A sovereign default is defined as the failure of a government to meet a principal or interest payment on the due date (or within the specified grace period). These episodes include instances in which rescheduled debt is ultimately extinguished in terms less favourable than the original obligation.

Debt intolerance is a syndrome in which weak institutional structures and a problematic political system make external borrowing a tempting device for governments to employ to avoid hard decisions about spending and taxing.

Second, country default is often the result of a complex cost-benefit calculus involving political and social considerations, not just economic and financial ones. Most country defaults happen long before a nation literally runs out of resources.

The fact that lenders depend on a sovereign nation’s willingness to repay, not simply its ability to repay, implies that sovereign bankruptcy is a distinctly different animal than corporate bankruptcy. In corporate or individual bankruptcy, creditors have well defined rights that typically allow them to take over many of the debtor’s assets and put a lien on a share of its future income. In sovereign bankruptcy, creditors may be able to do the same on paper, in practice their enforcement power is very limited.

Even if lenders cannot directly go in and seize assets as in a conventional domestic default, they still retain leverage sufficient to entice a country to repay loans of at least modest size. We can dismiss, however, the popular notion that countries pay back their debts so that they can borrow even more in the future. Ponzi schemes cannot be the foundation for international lending; they must eventually collapse.

A borrower can merrily roll along as long as lenders have confidence, but if for some (possibly extraneous) reason confidence is lost, then lending collapses, and no individual lender has the power or inclination to stave it off.

The IMF and increase in defaults:

The creation of the IMF since World War II has coincided with shorter but more frequent episodes of sovereign default.

This phenomenon is quite consistent with the view that default episodes occur even more frequently than they otherwise might, because both lenders and borrowers realise that in a pinch they can always count on subsidies from the IMF and the governments of creditor countries.

The problem with theoretical economic models:

Why do Governments pay their debt?

There is a small amount of literature that aims to help us understand why governments honour domestic debt at all.

However, the general assumption throughout the literature is that although governments may inflate debt away, outright defaults on domestic public debt are extremely rare. This assumption is in stark contrast to the literature on external public debt, in which the government’s incentive to default is one of the main focuses of inquiry.

Why are government debts opaque?

One can only surmise that many governments do not want capital markets to fully recognise the risks they are running by piling on debt and debt guarantees due to their fear of having to pay much higher financing costs.

Publishing historical data will make investors ask why current data cannot be made equally available. Still, one would think a strong case could be made for less profligate governments to open up their books more readily and be rewarded for doing so by lower interest rates. This transparency, in turn, would put pressure on weaker borrowers. Yet today even the United States runs an extraordinarily opaque accounting system, replete with potentially costly off-budget guarantees.

The reasons market crashes cause illiquidity:

The problem of having to liquidate at fire sale prices can extend to a far broader range of assets during a systemic banking crisis of the kind we focus on here. Different banks often hold broadly similar portfolios of assets, and if all banks try to sell at once, the market can dry up completely. Assets that are relatively liquid during normal times can suddenly become highly illiquid just when the bank most needs them.

When a country experiences an adverse shock-due, say, to a sudden drop in productivity, a war, or political or social upheaval-naturally banks suffer. The rate of loan default goes up dramatically. Banks become vulnerable to large losses of confidence and withdrawals, and the rates of bank failure rise. Bank failures, in turn, lead to a decrease in credit creation.

Modern economies depend on sophisticated financial systems, and when banking systems freeze up, economic growth can quickly become impaired or even paralysed.

The Federal Reserves perspective on securitisation:

In their eyes, financial innovation was a key platform that allowed the United States to effectively borrow much larger quantities of money from abroad than might otherwise have been possible. For example, innovations such as securitisation allowed U.S. consumers to turn their previously illiquid housing assets into ATM machines, which represented a reduction in precautionary saving.

The problem with securitisation:

In any event, the most extreme and the most immediate problems were caused by the market for mortgage loans made to “subprime,” or low-income, borrowers. “Advances” in securitisation, as well as a seemingly endless run-up in housing prices, allowed people to buy houses who might not previously have thought they could do so.

Unfortunately, many of these borrowers depended on loans with variable interest rates and low initial “teaser” rates. When it came time to reset the loans, rising interest rates and a deteriorating economy made it difficult for many to meet their mortgage obligations. And thus the subprime debacle began.

What are the signs of a financial crisis?

In the run-up to the recent crisis, in the case of rich countries one of the main this-time-is-different syndromes had to do with a belief in the invincibility of modern monetary institutions. Central banks became enamored with their own versions of “inflation targeting,” believing that they had found a way both to keep inflation low and to optimally stabilise output.

Though their successes were founded on some solid institutional progress, especially the independence of the central banks, those successes seem to have been oversold. Policies that appeared to work perfectly well during an all encompassing boom suddenly did not seem at all robust in the event of a huge recession.

We have come full circle to the concept of financial fragility in economies with massive indebtedness. All too often, periods of heavy borrowing can take place in a bubble and last for a surprisingly long time. But highly leveraged economies, particularly those in which continual rollover of short-term debt is sustained only by confidence in relatively illiquid underlying assets, seldom survive forever, particularly if leverage continues to grow unchecked.

The time is not different:

Just as an individual can go bankrupt no matter how rich she starts out, a financial system can collapse under the pressure of greed, politics, and profits no matter how well regulated it seems to be Technology has changed, the height of humans has changed, and fashions have changed.

Yet the ability of governments and investors to delude themselves, giving rise to periodic bouts of euphoria that usually end in tears, seems to have remained a constant.