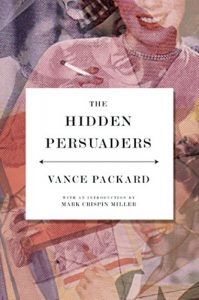 What you will learn from reading The Hidden Persuaders:

– The symbiotic relationship between economic growth and advertising.

– How standardisation and sameness led to brands creating personalities to differentiate themselves.

– How the drive to succeed socially has been hijacked by marketers and symbols of successes have been created.

The Hidden Persuaders is a fascinating book on the role advertising plays in business, media and politics. It documents how economic progress has become reliant on constant dissatisfaction and striving fuelled by clever advertising.

The creation of discontent has led to our current situation. A world where the standard of living is higher than ever but the satisfaction is at its lowest.

A must read for people trying to understand society from a more macro scale.

Does the word of the customer count?

The fact people often hide their likes and dislikes in the pursuit of social approval, led some marketers to conclude that you can’t assume people will tell the truth about their wants and dislikes even if they know them.

What you are more likely to get, they decided, are answers that will protect the informants in their steadfast endeavour to appear to the world as really sensible, intelligent, rational beings. One management consulting firm has concluded that accepting the word of a customer as to what he wants is “the least reliable index the manufacturer can have on what he ought to do to win customers.”

GDP, Consumption and the manufacturing of desire:

Since 1940, gross national product had soared more than 400 per cent; and man-hour productivity was doubling about every quarter century.

Good GDP results are one way of viewing economics realities and progress. The rise in GDP was widely believed to allow everyone to enjoy an ever-higher standard of living. That view was thoroughly publicised. But there was another way of viewing it: that we must consume, more and more, whether we want to or not, for the good of our economy.

By the mid-fifties merchandisers of many different products were being urged by psychological counselors to become “merchants of discontent.” One ad executive exclaimed with fervour: “What makes this country great is the creation of wants and desires, the creation of dissatisfaction with the old and outmoded.”

It therefore, can be said that the relationship of manufacturing desires and stimulating economic growth is symbiotic.

A major dilemma that was forcing marketers to search for more powerful tools of persuasion was the growing sameness of their products, with increased standardisation. Standardisation was the economic tool that drastically reduces the prices of goods. Yet, too many people were complacently saying that the gasoline brands were “all the same” and equally good.

How can you make a logical sales talk to a prospect to persuade him to swear by your brand when in truth the brands are essentially alike in physical characteristics?

The creation of brand personalities:

The subconscious salesmen, in grouping for better hooks, deployed in several directions. One direction they began exploring in a really major way was the moulding of images; the creation of distinctive, highly appealing personalities” for products that were essentially indistinctive.

The aim was to build images that would arise before our “inner eye” at the mere mention of the product’s name, once we had been properly conditioned. Thus they would trigger our action in a competitive sales situation.

While a competitor can often successfully imitate your product as to ingredients and claims of quality, a vivid personality image is much more difficult to imitate and so can be a more trustworthy sales factor.

But wouldn’t it be even better, merchandisers reasoned, it they could build into their products the same traits that we recognise in ourselves! Studies of narcissism indicated that nothing appeals more to people than themselves; so why not help people buy a projection of themselves?

That way the images would preselect their audiences, select out of a consuming public people with personalities having an affinity for the image. By building in traits known to be widely dispersed among the consuming public the image builders reasoned that they could spark love affairs by the millions.

An interesting investigation done my psychologists found that only a minority of the populations, mostly men in the lower class, have any real interest in the technical aspect of cars.

The major finding that stands out in the survey is that automobiles are heavily laden with social meanings and are highly esteemed because they “provide avenues for the expression . , of the character, temperament and self concept of the owner and driver…. The buying process is an interaction between the personality of the car and the personality of the individual.

One of the interesting variations, under the ways to fulfill “wish for attention” through car ownership, is what the investigators call “conspicuous reserve.”Those people want other people to know their status but at the same time want to express it modestly.

Some may engage in deliberate downgrading. This is “a frequent technique of people who are secure in their high social position. They show their superiority by displaying indifference to status-by purposely buying less expensive cars than might be expected.

Social Strivers and positioning goods as symbols of success:

While American society presents an over-all picture of stratification, most of the individuals at the various layers-expecting only the benighted non-strivers near the bottom-aspire to enhance their status.

This trait, which if not peculiarly American is at least particularly American, offered an opportunity that the depth merchandisers were quick to exploit. It needed to be done with some deftness as no one cares to admit he is a social striver.

Lloyd Warner spelled out the inviting situation to ad men in these words: “Within the status systems something else operates that is at the very centre of American life and is the most motivating force in the lives of many of us-namely what we call social mobility, the aspiration drive, the achievement drive, the movement of an individual and his family from one level to another, the translation of economic goods into socially approved symbols, so that people achieve higher status.

All the social striving encouraged by these various strategies of symbol-selling has a cost, too, emotionally. Economist Roberr Lekachman indicated this when he stated: “We can only guess at the tensions and anxieties generated by this relentless pursuit of the emblems of success in our society, and shudder at what it might give rise to during an economic setback.

As Pierre Martineau pointed out, everybody looks up in the world, but only within believable limits. Products that are presented to the public as too perfect or too high-toned may, depth probers found, cause a sizable number of people to ask a little anxiously: “Am I good enough for the product?” This was detected in attitudes toward some autos and refrigerators, presented as super wondrous or perfect.

The drive to create psychological obsolescence by the double barrelled strategy of 1) making the public style-conscious, and then (2) switching styles, began extending in 1956 to all sorts of home appliances.

The marketers were driven to it by an ugly economic fact: the overwhelming majority of American families already had refrigerators, ranges, and washers. In order to be persuaded to buy replacements, rather than to wait for the old ones to collapse in exhaustion, some powerful influences would be brought to bear on the consumer.

An executive said the company was committed to a program of “planned product obsolescence,” presumably by creating new styles and features each year that would make appliance owners dissatisfied with the models they had.

The changing of politics (good vs evil):

Americans, in their growing absorption with consumption, have even become consumers of politics. This has brought an increased emphasis on giving the nod to the best performer; and in evaluating performance the “sincerity’ of the presentation has taken on increased importance. He pointed out, in The Lonely Crowd, “Just as glamour in packaging and advertising of products substitutes for price competition, so glamour in politics, whether as charisma-packaging-of the leader or as the hopped-up treatment of events by mass media, substitutes for the type of self-interest that governed the inner-directed.”

Chotiner’s basic technique was to present the public with two images: the good guy (his man), the bad guy (the opponent). One of the topics he covered in his 12,000-word speech to the forty-eight state chairmen was the use of, and defense against, the “smear”; and he told about the art of implying that the opponent has leftish leanings by using pink paper. He also talked about the techniques of generating the appearance of public demand and the technique of winning people’s hearts with carefully stimulated candor.

Mr. Bernays has gotten his views published in The Annals of the American Academy of Political and Social Science, where he pointed out that “newsworthy events involving people usually do not happen by accident. They are planned deliberately to accomplish a purpose, to influence ideas and actions.”

The files of The Public Relations Journal contains what to many may seem like a startling number of accounts of American men of science cooperating intimately and confidentially with the mind-molders, and would-be molders, of public relations.