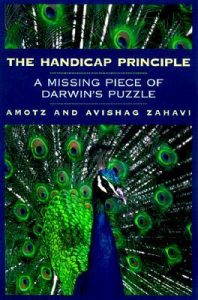 What you will learn from reading The Handicap Principle:

– What is costly signalling and why it is important.

– Why signalling works best when you can compare the signal with a weaker signal.

– How the classic how are you conversation starter is used actually to probe for someones mood.

The Handicap Principle is a very simple idea: waste can make sense, because by wasting one proves conclusively that one has enough assets to waste and the investment (the waste itself) is just what makes the advertisement reliable. Think of

The social interactions among children in a game of tag serve as a beautiful model of prey-predator interactions.

This issue of choice is crucial. An essential condition for the development of any signal is that the receiver of the signal must have at least one other alternative otherwise there is no chance of affecting the receiver’s actions and no point in signaling to it. A gazelle can tell a wolf reliably that it is an excellent runner and that the wolf has little chance of catching it, but if the wolf doesn’t have the alternative of finding other prey, it has to try to catch that gazelle, even though the gazelle has just proven that the chase will be a hard one.

The Limits of our Models:

A model is a tool; and anthropomorphic models, if anything, are closer to the reality of animal behavior than mathematical ones. Needless to say, models are not proofs; they are suggestions. Models can help one devise experiments and plan the collection of data to test interpretations. We use humans as a model only to improve our understanding of the behavior of other organisms and the logic behind their behavior. After all, mathematical models-much in vogue among zoologists these days-are also just that: models, which have to be tested, and which may or may not reflect reality.

According to our model, the cost-the- “waste”-is the very element that makes the showing off reliable. The female in this model is not a silly creature attracted to extravagant males just because “every female is”; by selecting as a mate a male who can afford lavish displays, she is choosing a good father for her offspring.

If, on the other hand, the cost of a signal is reduced to the extent that every individual can use it equally well, then the signal can no longer reveal differences in the quality or motivation of individuals. In such a case, the signal loses its value.

Because the signal’s cost has gone down significantly, the signal is no longer useful and will disappear. The evolution of signals-signal selection-is thus fundamentally different from the evolution of all other adaptations.

If there is no cost, nothing prevents cheaters from using a signal to their benefit and to the detriment of the receivers, and that signal will lose its value as a signal. This has happened not infrequently in human history. When money is easier to get, it loses value through inflation.

We say that by its very nature, the reliability required in signaling militates against efficiency. Handicaps increase the reliability of signals not despite the fact that they make an animal less efficient, but because they do. Any improvement in a signal must be accompanied by a cost to the signaler-that is, it must make the signal’s bearer less well adapted to its environment.

A circle in the middle of an area that ideally is symmetrical is another. In fact, any symmetrical decoration on body parts helps observers assess symmetry of shape and structure; and since the decoration cannot be more symmetrical than the body parts themselves, the information conveyed is reliable.

Once we realized that there is a relationship between an animal’s decorative markings and the information those markings convey, we started looking at animals differently. Till then, we had been looking at animals and trying to identify their species. From then on, we have been trying to see what an animal’s markings can tell us about its features and adaptations. Which body parts are emphasized by an animal’s decoration, and what is their importance to that animal? Again, we found that this new approach revealed to us many features that we had never noticed before.

If we assume that the body is the resonator, the sounding board, then it stands to reason that the quality of vocalizations is affected by the state of that body.

Vocal pitch, too, reflects the tension of the muscles of the body and face.? This relationship between vocalizations and the body that produces them makes them hard to fake. To make a deceitful call, one has to adopt the posture necessary to produce the fake message; since each action has its own optimal starting position, changing position to produce a false message may make it extremely difficult to carry out the action really intended.

A similar logic governs the daily greetings we exchange with one another. Do our coworkers really need to be reassured that it is a good, rather than a bad, morning? The greeting enables our colleagues to detect, by the tone of our voice, fine differences in our daily moods. A colleague’s mood is very important to people working with him or her-they need to know what to expect from their colleague that day.

It is precisely the standard nature of the greeting that lets us detect fine differences in mood-detection that is to the benefit of both greeter and listener. This simple method seems to be far more effective and reliable than would be long, detailed, wordy descriptions of our daily moods. And indeed, sometimes the response to a good-morning is, “Are you all right? What happened?”

Confidence comes from stopping the search for information:

One who tries both to listen and to vocalize is likely to falter a bit in the rhythm-a stumble that will display divided concentration. Therefore, a precise rhythm shows that one is not collecting information. One who is certain of his or her ability to win or is determined not to give in does not have to collect additional information. But one less confident, who is still trying to decide which way to act, needs any information available. This difference between the confident and the wavering is brought out reliably by a rhythmic threat.

Language is not costly:

Here we shall only say that, with all its potency, human language has no component that guarantees its reliability and prevents cheating; nor is it in and of itself well suited to convey exact, fine gradations of feeling and intention. Thus, in no human society does the language of words replace wordless communication-communication by nonverbal sound, intonation, stance, and movements. And this wordless, nonverbal communication is the only “speech” of animals.