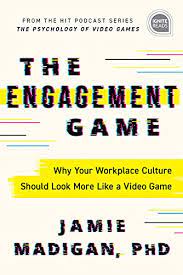 What you will learn from reading The Engagement Game:

– How competence and the feeling of progression is a key part to someones engagement with a task.

– How ideas from video games can help shape a productive workplace.

– The core elements of engagement and practical guidelines to embed these in your life.

The engagement is a fascinating book which applies core game design concepts to workplace culture, I found ideas in this book not only useful for work but for your own personal life too. If we can all make our personal projects more engaging than we will be more likely to follow through with them.

If you play video games then this book will be particularly more interesting to you as you will begin to become aware of how video games work on your psychology.

Game’s designers lay the groundwork for keeping people engaged, because a lot of thought and science went into engineering the players’ experiences.

In video games accurate feedback about player performance is given exactly when it is needed so that the player can get better and understand how the game works. Your role is clearly delineated, and objectives are designed so that they fit together neatly to encourage progression and adaptation to the demands of a given situation.

Buying understanding the key elements of what makes video games so engaging, we can design a more engaging workplace.

Researchers have identified the importance of many job characteristics that tend to create meaningful work—things like challenge, task variety, autonomy, and a sense of how the work fits into the larger organisational context and strategy.

One of the research programs most relevant to gamer engagement was actually started in the workplace: self-determination theory, or SDT.

This model explains why someone might voluntarily choose to engage in a task by showing that the characteristics of the task make it interesting, satisfying, fun, or otherwise motivating in and of itself. SDT holds that there are three such task characteristics: competence, autonomy, and relatedness.

Competence is the feeling that you are good at something, or at least that you’re getting better. Tackling new projects so you can gain experience and take on more and more responsibility is driven by a need for competence.

This feeling of mastery is common in video games, and clever game designers have developed many paths toward it. A game has to provide a challenge by increasing its difficulty in response to a player’s progression and mastery of the game’s mechanics.

Games also have to give players feedback to let them know they’re getting better. Scoreboards and leaderboards that show the high scores of racing games, time trials, or point-based games are the obvious examples that have been included in video games since their coin-operated days.

To facilitate this, Blizzard has baked all kinds of competence indicators into the game. Some are at the most basic of levels, such as getting on-screen indicators of when your shots are connecting.

None of these little touches are accidents or arbitrary. The game designers include them in order to scratch players’ need for competence and show that what they’re doing is meaningful.

If you want to apply what you know about good video game design to motivate employees through a sense of accomplishment, here are some suggestions:

• Never underestimate the power of frequent feedback about specific behaviours or outcomes.

• Celebrate not only successful outcomes but the behaviours that carried people to them.

• Find and share some indicator of progress every day, even if it is small and incremental.

• Help employees understand and track how much their skills are improving by offering comparative data from the past or having them go through assessments that measure their development over time.

• Work hard to balance challenging work with the chance to demonstrate competence.

In addition to mastering skills, video games are about choices. Yes, rules provide boundaries for those choices—rules are what make playing Scrabble something other than an exercise in spelling. But successful games let players satisfy their need for autonomy by giving them a constant stream of meaningful choices, which leads to more motivation and engagement.

Here are some ways for you as a manager or coach to take inspiration from what works in video games when creating a sense of autonomy:

Finally, we have the third intrinsic motivator from self-determination theory—relatedness. We all like to feel that we’re important to other people.

But the ways that game designers create opportunities for interactions and relationships among players point to fruitful ideas ready for use by workplace leaders:

Goals direct the person’s attention toward what will help accomplish the goal and away from things that won’t. Goals prompt people to develop better strategies for doing their work.

Think of these as amplifiers that will make goal setting more effective:

4. Commitment to reaching the goal

5. Complexity of the tasks needed

There’s a reason why most video games give players very specific thresholds to cross in order to check things off their quest logs or to unlock achievements. As a leader, you can increase goal specificity and clarity by quantifying behaviours or outcomes but also by enumerating the tasks and subtasks to be accomplished en route to the goal.

The game tells players every time they nudge the needle by filling in some type of progress bar. We rarely have things so cleanly cut in the workplace, but managers should strive to provide regular, accurate, and quantifiable feedback.

Games brake complex tasks into chunks and allow players to master them individually. Effective leaders do the same with employees who are working on highly complex goals by providing a road map for how they all fit together.

When players look at their results, they should find suggestions that:

1. Explain what was found.

2. Make a suggestion that is future oriented.

3. Explain why the suggestion is important.

4. Suggest a specific, better behaviour to take as an alternative to what the player did.

Many games, like the Wild West simulator Red Dead Redemption 2, give you scores at the end of missions that are accompanied by checklists of things that you did or did not do. Took longer than ninety seconds to escape the lawmen and left some valuables behind on the baggage car? Yikes, that’s going to cost you the gold medal.

Players want to know exactly what they did to get the outcome they did so that they can understand how best to close that performance/goal gap.

Feedback providers should know that it’s far easier to convince someone to change his behaviour than it is to change his self-image, especially for something like work that is important to his identity. Indeed, one analysis of the literature found that feedback interventions that threatened recipients’ self-esteem (e.g., by making them feel stupid) were generally less effective than those focusing on behaviours.

Psychologists have long known that the more quickly a reward comes after a behaviour, the more likely people are to learn it and repeat it. So, most successful video games are built around core loops where players see an opportunity to perform, engage in a behaviour, and receive feedback immediately

To summarise, here are some things you should do to give feedback more like a video game:

The open world game genre largely lets players roam around and do what they want, but such games feature a lot of progress bars. For example, in the Marvel’s Spider-Man game, every little thing you do counts as progress toward some goal. Stop a mugging and it will increase your progress toward eliminating crime in that neighbourhood. Take out this enemy stronghold? That’s progress toward undermining a supervillain’s power in the city. Capture a wayward messenger pigeon?

This suggests that leaderboards—be they in a video game or in the workplace—operate by getting people to set goals. But it also suggests that this is most likely to happen with simple tasks where the person can see a straight line from their efforts to reaching the goal. Leaderboards for complex tasks like developing your employees or identifying competitive threats in the business environment are unlikely to do any good.

The authors note that “if people do not believe a leaderboard provides worthwhile goals, leaderboards will not be successful at altering employee behaviour.”

So this can be tricky if you’re implementing leaderboards as part of a gamification effort. You need to make sure that people naturally and willingly accept the goals implied by the social comparisons in the leaderboard.

Human psychology is complex, and there’s a lot more going on between people’s ears than you might expect during a competition. People consistently make irrational comparisons with others, they obsess over missed opportunities, they react differently depending on how comparisons are framed, and they obsess over arbitrary performance standards.

Sometimes we don’t compete against other people so much as we strive to surpass some standard or cross some threshold. If your company invokes cutoffs for making an all-star list or being in the top 10 percent of performers in a gamified system, people at the edges of those lists are going to be a lot more motivated, because not all rungs on a tournament ladder are equally spaced.

If you are implementing a gamification system with points or setting standards for people to perform against at work, here are some things to keep in mind: