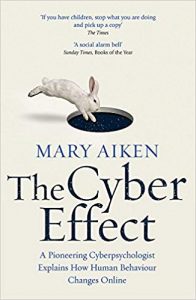 What you will learn from reading The Cyber Effect:

– The effects the internet is having on society.

– What behaviours the internet promotes and how to stop them.

– How cyber reality is creating false expectations and removing barriers to crime.

The Cyber Effect Book Summary explores the impact of the internet on society. The impacts include, how the internet has promoted bad behaviour by reducing barriers and cost of behaving badly. How internet socialises people to new norms and views that previously would have been impossible. How the internets anonymity has reduced the role of shame in social life, meaning people can explore their addictions without social ridicule.

The Rise of the Internet:

When you are checking your phone or spending time surfing websites, you are effectively in a different environment. You have gone somewhere else. You are not present in real-world terms.

But many people deny the awareness that they’ve entered a new environment when they go online, so they remain ignorant—and are fooled by their sense that nothing has changed.

Cyber is not just a transactional medium, for things like passively viewing television or making a phone call. It is a highly interactive, highly engaging, and highly immersive environment—uniquely compelling and attractive to humans.

Technologies can and will be mis-used:

This is no different from how we regard automobiles and drunk driving. Any technology can be misused.

Cyberchondria, I’ve argued that the prevalence of the online medical search has resulted in a rise in unnecessary doctor visits and risky surgical procedures.

Once behavior mutates in cyberspace, where a significant number of people participate, it can double back around and become a norm in everyday life, something I call cyber-migration. And because we aren’t face-to-face when we are communicating and interacting with others online, we can be anonymous or, more important, we feel we are.

When we are anonymous we act differently. Without social pressure and constraints we act more aggressively and impulsively.

Technology can make it harder for anyone to control impulses and can facilitate and escalate problematic behavior.

All of these groups can easily syndicate to socialize, normalize, and facilitate their particular interests.

Mary says “I hope I’m wrong, but I believe this cyber effect could result in a surge in deviant, criminal, and abnormal behavior in the general population.”

Online syndication isn’t just about finding other people who share your interests. It can ignite a process of norming and socialization.

The more specific the tie, the stronger the bond. In terms of atypical sexual preference online, the fetish is the tie.

One can easily stumble upon a behavior online and immerse oneself in new worlds and new communities, and become cyber-socialized to accept activities that would have been unacceptable just a decade ago.

Follow-up work suggests that the same findings apply to women. Both the narcissist and the exhibitionist are hungry for feedback or some reaction to their behaviour.

The nature of the relationship between voyeur and exhibitionist is symbiotic, almost parasitic, and explains the phenomenon of reality TV.

Impulsivity and the Internet:

What is impulsivity? It is defined as “a personality trait characterized by the urge to act spontaneously without reflecting on an action and its consequences.”

Recent studies have also found impulsivity to be positively correlated with excessive computer game playing and excessive Internet use in general.

Addiction in small rewards and gambling:

Sporadically, though, small rewards do come, and these intermittent rewards, as they’re called, bring us back again and again.

Intermittent reinforcement is much more effective at motivating people than continuous rewards.

With Gambling a drama is unfolding  that creates expectancy, which has been found to deliver a little dopamine to the brain.

For a thrilling second, or two, or three, you believe your card is a winner. In the gambling trade, this tease is called “a heart-stopper,” because it can give you a surge of excitement, a little buzz of pleasure.

This is classic positive reinforcement. So even when you don’t win, that temporary buzz of excitement is enough to bring you some pleasure and reinforce card-scratching behavior.

When any behavior is rewarded with pleasure, you are more likely to repeat it.

In game design this is called “fun failure.” Even though you are failing miserably, you aren’t miserable. Why? That biochemical pleasure hit makes all the difference.

The dopamine rewards of seeking and foraging have probably made human beings highly adaptable to new environments. We are rewarded for exploring.

You check your phone to (intermittently) get good or surprising news, which is enough to keep you checking.

Our evolutionary instincts, such as seeking, make it hard to resist. Not to mention the hooks, signals, alerts, prompts, fun failure, and heart-stoppers.

As a profiler, I think it can tell you more about the person using the word than it does about whatever they are attempting to describe.

Sexuality Center, referred to as “the Triple A Engine.” The A’s stand for anonymity, accessibility, and affordability.

Cyber Slacking in the Workplace:

At the office, cyber-slacking is what happens when you check your Facebook wall when you should be knee-deep in a financial-forecast.

Companies say anything they can get away with on the internet:

The answer is disturbing on many levels. It seems that as long as no hard science exists to disprove their claims, companies feel free to say almost anything they can get away with.

This is scientism, or the exaggerated belief in the power of science, at its worst.

While new norms have been established with the help of marketers and the clever tech industry rather than based on behavioral or social science.

Especially important for Teenagers, as they crave feedback, which helps them figure out, eventually, who they are—and what the world expects of them.

This feedback happens online, not just from their friends but in free online astrological profiles, personality questionnaires, and a plethora of phone apps that will analyze their handwriting, music tastes.

(What feedback do they want to hear?)

Feedback is what fuels the popularity of annoyingly ubiquitous online tests, like BuzzFeed’s “Which Disney character are you?” and the online permutations

The information that we use to learn about ourselves isn’t provided in a mirror’s reflection. It is provided by others—their comments about us, the way they treat us, and things they say.

At some point in their development, many teenagers come to suspect that there is something wrong with their physical appearance.

I am not saying these dumb mistakes of adolescence should be encouraged, but I believe they should be accepted as part of a long process called growing up.

Because when we are in a real-world support group, we can’t help but react to real-world cues—facial expressions, posture, dress, body language, smell, tone.

The Rise of the Cyber Self:

The cyber self is a masterful creation—funnier, wittier, better looking than the real self.

Teens adjust what they present online depending on the audience they want to impress. Everything is calibrated for a specific purpose—to look cool, or tough, or hot.

Technology has been the ultimate equalizer in the genetic lottery of good looks.

Survival of the fittest now requires expert Photoshopping skills. There is little doubt this will continue.

We are moving from natural selection to cyber selection.

The greater the distance you are from the people you are harming, the easier it is on your conscience.

Many medical colleagues have described to me the great frustration they feel when patients claim to know the diagnosis prior to their examination.

Who are these “experts” in the medical forums? In that lean, virtual, and socially impoverished medium, the old-school metrics can’t be used to establish trust.

But health anxiety is not about logic.

Sites are designed to lead a worried participant through a set of questions to determine a probable diagnosis. This is where the power of suggestion becomes a factor.

Formal or informal codes of conduct actually exist for all groups, whether they are a family of primates or an underworld gang.

Almost any kind of criminal activity—extortion, scams, hits, and prostitution—can be ordered up online now, thanks to well-run websites with shopping carts, concierge hospitality, and surprisingly great customer service.

That’s the funny thing about moral perceptions: If enough people are breaking a law, it stops being regarded as immoral.

“Let your critics be your gurus. You can treat them as an opportunity. Ask yourself why you’re ruminating on a comment. Why does it bother you? What insecurities are being activated in you?”

If you’re interested in learning how to remove the addicting effects of technology check out our summary of Indistractable by Nir Eyal.