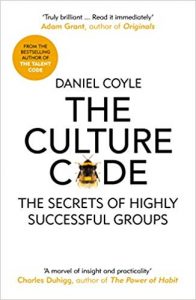 What you will learn from reading The Culture Code

– How to read the social signals of high performance groups.

– How leaders can create a high performance team.

– How to design teams for efficiency or creativity.

The Unspoken Questions in a Social Setting:

When you first get in a group and start collaborating or talking, you are subconsciously engaged in a process psychologists call status management.

You are figuring out where you fit into the larger picture of the group. Answering questions like:

Who is in charge? Is it okay to criticise someone’s idea? What are the rules here?

One misconception about highly successful cultures is that they are happy, lighthearted places. This is mostly not the case. They are energised and engaged, but at their core their members are oriented less around achieving happiness than around solving hard problems together.

Group performance depends on behavior that communicates one powerful overarching idea: We are safe and connected.

In high performance groups people do not manage their status or worry about who in charge.

Cohesion happens not when members of a group are smarter but when they are lit up by clear, steady signals of safe connection.

The signs of a Group with Good Chemistry:

High levels of mixing; everyone talks to everyone

When you encounter a group with good chemistry, you know it instantly. It’s a paradoxical, powerful sensation, a combination of excitement and deep comfort that sparks mysteriously with certain special groups and not with others. There’s no way to predict it or control it.

Energy: They invest in the exchange that is occurring

Individualisation: They treat the person as unique and valued

Future orientation: They signal the relationship will continue

These cues add up to a message that can be described with a single phrase: You are safe here.

Belonging cues have to do not with character or discipline but with building an environment that answers basic questions: Are we connected? Do we share a future? Are we safe? Let’s take them one by one.

“A lot of coaches can yell or be nice, but what Pop does is different,” says assistant coach Chip Engelland. “He delivers two things over and over: He’ll tell you the truth, with no bullshit, and then he’ll love you to death.”

Try saying this — “I’m giving you these comments because I have very high expectations and I know that you can reach them.”

What this signals — You are part of this group. This group is special; we have high standards here. I believe you can reach those standards.

Personal, up-close connection (body language, attention, and behavior that translates as I care about you)

Big-picture perspective (larger conversations about politics, history, and food that translate as Life is bigger than basketball)

Feeling Valued and Listened to is an integral part team performance:

“Now I see how negatively those signals can impact the group. So I try to show that I’m listening. When they’re talking, I’m looking at their face, nodding, saying ‘What do you mean by that,’ ‘Could you tell me more about this,’ or asking their opinions about what we should do, drawing people out.”

Show you make mistakes, and invite input with simple phrases like:

“This is just my two cents.”

“Of course, I could be wrong here.”

“What am I missing?”

“What do you think?”

This kind of signal is not just an admission of weakness; it’s also an invitation to create a deeper connection, because it sparks a response in the listener: How can I help?

“To create safety, leaders need to actively invite input,” Edmondson says. “It’s really hard for people to raise their hand and say, ‘I have something tentative to say.’ And it’s equally hard for people not to answer a genuine question from a leader who asks for their opinion or their help.”

Here is the unheralded person who makes our success possible.

This is why many successful groups use simple mechanisms that encourage, spotlight, and value full-group contribution.

Groups need to signal who’s in and who’s out:

Deciding who’s in and who’s out is the most powerful signal any group sends, and successful groups approach their hiring accordingly.

Zappos, have added an extra layer of belonging cues: after training is complete, they offer trainees a $2,000 bonus if they quit.

“No Dickheads.” It’s simple, and that’s why it’s effective.

Capitalise on Threshold Moments: When we enter a new group, our brains decide quickly whether to connect. So successful cultures treat these threshold moments as more important than any other.

Then you hear the following words: Whatever you were before, you are a filmmaker now. We need you to help us make our films better.

These small moments are doorways to two possible group paths: Are we about appearing strong or about exploring the landscape together? Are we about winning interactions, or about learning together?

Groups that ask for help:

“So here’s how we’ll know if you had a good day,” Reinhardt continued. “If you ask for help ten times, then we’ll know it was good. If you try to do it all alone …” His voice trailed off, the implication clear—It will be a catastrophe.

“People tend to think of vulnerability in a touchy-feely way, but that’s not what’s happening,” Polzer says. “It’s about sending a really clear signal that you have weaknesses, that you could use help. And if that behavior becomes a model for others, then you can set the insecurities aside and get to work, start to trust each other and help each other.

Person A sends a signal of vulnerability.

Person B detects this signal.

Person B responds by signaling their own vulnerability.

Person A detects this signal.

A norm is established; closeness and trust increase.

Each invitation created another vulnerability loop that drove cooperation—Hey, I’m doing this crazy balloon-hunting project and I need your help.

Leaders should be in the trenches:

They should interact in ways that make the other person feel safe and supported They take a helping, cooperative stance.

They make occasional suggestions to open up alternative paths

I’m going to butcher this but the context is this a office in US army called Cooper:

“but my respect for him deepened because a lot of officers will tell you what to do, but they won’t do it themselves. This man … asks for suggestions. If they’re good, he uses them.… And he participates in everything.… The dirtiest, rottenest jobs that we tackle, he is in there doing as well as the rest of us. How could you not respect him?” A new team member who called him by his title was quickly corrected: “You can call me Coop, Dave, or Fuckface, it’s your choice.”

“Now let’s see if someone can poke holes in this” or “Tell me what’s wrong with this idea.” He steered away from giving orders and instead asked a lot of questions. Anybody have any ideas?

“For me, every conversation is the same, because it’s about helping people walk away with a greater sense of awareness, excitement, and motivation to make an impact. It’s about discovery. For me, that has to do with asking the right questions the right way.”

What is one thing that I currently do that you’d like me to continue to do?

What is one thing that I don’t currently do frequently enough that you think I should do more often?

What can I do to make you more effective?

One of the best methods for handling negative news is that of Joe Maddon, the coach of the Chicago Cubs and avowed oenophile. In his office, Maddon keeps a glass bowl filled with slips of paper, each inscribed with the name of an expensive wine.

When a player violates a team rule, Maddon asks them to draw a slip of paper out of the bowl, purchase that wine, and uncork it with their manager. In other words, Maddon links the act of discipline to the act of reconnection.

Questions for Analysis of performance:

What were our intended results?

What were our actual results?

What caused our results?

What will we do the same next time?

What will we do differently?

How to create High Purpose Environments:

High-purpose environments are filled with small, vivid signals designed to create a link between the present moment and a future ideal.

How to send good signals as a teacher:

Warmth (the teachers were kinder, more attentive, and more connective)

Response-opportunity (the teachers called on the students more often, and listened more carefully)

Feedback (the teachers provided more, especially when the student made a mistake)

Look for Expectations and send opposite signal:

Police office with football Hooligans: Every time an officer banters with a fan, every time a fan notices the lack of protective armour, a signal is sent: We are here to get along.

How to Run a successful Training Day:

Framing: Successful teams conceptualised MICS as a learning experience that would benefit patients and the hospital.

Roles: Successful teams were explicitly told by the team leader why their individual and collective skills were important for the team’s success, and why it was important for them to perform as a team.

Rehearsal: Successful teams did elaborate dry runs of the procedure, preparing in detail, explaining the new protocols, and talking about communication.

flood the environment with narrative links between what they were doing now and what it meant.

What are your priorities?

The difference for creative leading vs proficiency leading:

Example —All creative projects are cognitive puzzles involving thousands of choices and thousands of potential ideas, and you almost never get the right answer right away. So test.

For creative projects you rely on discovery. For proficiency execution.

Skills of proficiency are about doing a task the same way, every single time. They are about delivering machine-like reliability, and they tend to apply in domains in which the goal behaviors are clearly defined, such as service.

This reflects the truth that many successful groups realize: Their greatest project is building and sustaining the group itself. If they get their own relationships right, everything else will follow.

Fill the group’s windshield with clear, accessible models of excellence.

Build vivid, memorable rules of thumb (if X, then Y).

Spotlight and honor the fundamentals of the skill.

Creative skills, on the other hand, are about empowering a group to do the hard work of building something that has never existed before.

Keenly attend to team composition and dynamics. Define, reinforce, and relentlessly protect the team’s creative autonomy. Make it safe to fail and to give feedback. Celebrate hugely when the group takes initiative.

These aren’t gentle suggestions so much as clear reminders, crisp nudges in the direction the group wants to go.

Don’t presume people see the world the way you do:

Leaders are inherently biased to presume that everyone in the group sees things as they do, when in fact they don’t.

Use stories of action as artefacts:

Use Artifacts: and immortalise things that matter or actions.

One way successful groups do this is by spotlighting a single task and using it to define their identity and set the bar for their expectations.

Pecknold is not the only leader to build purpose around spotlighting a small, effortful behavior. At his restaurants, Danny Meyer is known for moving the salt shaker if it shifts even slightly from its spot at the table’s center.