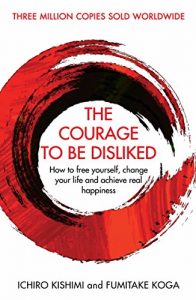 The Courage to Be Disliked Book Summary – Ichiro Kishimi

What you will learn from reading The Courage to be Disliked:

– How to reframe and take responsibility for things in your life

– How to accept everything and be at peace

– How to understand peoples behaviour better

The Courage to be Disliked Book Summary:

The courage to be disliked book summary is the an indispensable guide to becoming free from others judgments.

If one quote could summarise this book well it would be this – “You’re the only one who’s worried how you look”.

In the courage to be disliked you will explore how to separate your ‘tasks’ from others and how to think about freedom. If you want to live with more freedom from others or you generally feel anxious when others criticise you, then this is the book for you. Read on.

Freedom is being disliked by other people.

Conducting yourself in such a way as to not be disliked by anyone is an extremely unfree way of living.

Look to at things as a whole:

Generalising statements: you see only a part of things but judge the whole.

Hardship should be an opportunity to look ahead and think, What can I do from now on?

No matter what moments you are living, or if there are people who dislike you, as long as you do not lose sight of the guiding star of “I contribute to others,” you will not lose your way, and you can do whatever you like.

None of us live in an objective world, but instead in a subjective world that we ourselves have given meaning to. The world you see is different from the one I see, and it’s impossible to share your world with anyone else.

You Control your Reality:

‘No experience is in itself a cause of our success or failure. We do not suffer from the shock of our experiences—the so-called trauma—but instead we make out of them whatever suits our purposes. We are not determined by our experiences, but the meaning we give them is self-determining.’

We determine our own lives according to the meaning we give to those past experiences. Your life is not something that someone gives you, but something you choose yourself, and you are the one who decides how you live.

It is you who is ignoring reality. Does fixating on what you are born with change the reality? We are not replaceable machines. It is not replacement we need, but renewal.

Every criminal has an internal justification for getting involved in crime.

The Greek word for ‘good’ (agathon) does not have a moral meaning. It just means ‘beneficial’. Conversely, the word for ‘evil’ (kakon) means ‘not beneficial’.

Lifestyle is the tendencies of thought and action in life.

On the other hand, if one chooses a new lifestyle, no one can predict what might happen to the new self, or have any idea how to deal with events as they arise.

It will be hard to see ahead to the future, and life will be filled with anxiety. A more painful and unhappy life might lie ahead. Simply put, people have various complaints about things, but it’s easier and more secure to be just the way one is.

When we try to change our lifestyles, we put our great courage to the test. There is the anxiety generated by changing, and the disappointment attendant to not changing. I am sure you have selected the latter.

For instance, earlier you said, ‘If only I could be someone like Y, I’d be happy.’ As long as you live that way, in the realm of the possibility of ‘if only such and such were the case’, you will never be able to change. Because saying ‘if only I could be like Y’ is an excuse to yourself for not changing.

Choosing not to act, is choosing to save self from failure:

He doesn’t want to expose his work to criticism, and he certainly doesn’t want to face the reality that he might produce an inferior piece of writing and face rejection. He wants to live inside that realm of possibilities, where he can say that he could do it if he only had the time, or that he could write if he just had the proper environment, and that he really does have the talent for it.

In another five or ten years, he will probably start using other excuses like ‘I’m not young anymore’ or ‘I’ve got a family to think about now.’

You’re not equipped with the courage to change your lifestyle. It’s easier with things just as they are now, even if you have some complaints or limitations.

‘No matter what has occurred in your life up to this point, it should have no bearing at all on how you live from now on.’ That you, living in the here and now, are the one who determines your own life.

But as long as she has a fear of blushing, she can go on thinking, I can’t be with him because I have this fear of blushing. It could end without her ever working up the courage to confess her feelings to him, and she could convince herself that he would reject her anyway.

At first glance, one might think it inferior. But the issue is really what sort of meaning I attribute to that height; what sort of value I give it.

Such people try to make themselves ‘special’ by way of their experience of misfortune, and with the single fact of their misfortune try to place themselves above others.

‘In fact, if we were to ask ourselves who is the strongest person in our culture, the logical answer would be the baby. The baby rules and cannot be dominated.’ The baby rules over the adults with his weakness. And it is because of this weakness that no one can control him.

What happens when you compare yourself to others?

Give some thought to it then, if it were you, specifically, who had a consciousness of being in competition with the people around you. In your relations with them, you will have no choice but to be conscious of victory or defeat. Mr A got into this famous university, Mr B found work at that big company and Mr C has hooked up with such a nice-looking woman—and you’ll compare yourself to them and think, This is all I’ve got.

‘You’re the only one who’s worried how you look.’

Even if you are not directly abusive, when you feel genuinely angry due to another person’s words or behaviour, please consider that the person is challenging you to a power struggle.

That is to say, the goal of revenge on the parents. If he becomes a delinquent, stops going to school, cuts his wrists or things like that, the parents will be upset. They’ll panic and worry themselves sick over him. It is in the knowledge that this will happen that the child engages in problem behaviour.

The moment one is convinced that ‘I am right’ in an interpersonal relationship, one has already stepped into a power struggle.

In other words, the conviction that ‘I am right’ leads to the assumption that ‘this person is wrong’, and finally it becomes a contest and you are thinking, I have to win.

For example, a man sends out résumés to find work and gets interviews, only to be rejected by one company after another. It hurts his pride. He starts to wonder what the purpose in working is if he has to go through such things.

None of these are examples of the work itself becoming disagreeable. What is disagreeable is being criticised or rebuked by others through the work, getting labelled as having no ability or being incompetent or unsuited to the work, and hurting the dignity of one’s irreplaceable self.

Why Complaining is not a strategy:

One is running away from one’s life tasks by saying that everything is the fault of other people, or the fault of one’s environment.

By placing the fault outside of your control you remove responsibility. Doing this means you internalise that fate alone guides your life. Therefore, you won’t try to make any changes as doing so would be a waste.

You believe in your partner; that is your task. But how that person acts with regard to your expectations and trust is other people’s tasks.

On the other hand, what kind of judgement do other people pass on that choice? That is the task of other people, and is not a matter you can do anything about.

What another person thinks of you—if they like you or dislike you—that is that person’s task, not mine.

Remember the words of the grandmother: ‘You’re the only one who’s worried how you look.’ Her remark drives right to the heart of the separation of tasks.

What other people think when they see your face—that is the task of other people, and is not something you have any control over.

Why do you intervene – intruding on other people’s tasks?

Because you see the other party as beneath you.

Through intervention, you try to lead the other party in the desired direction.

You have convinced yourself that you are right and that the other party is wrong.

People are not driven by past causes, but move toward goals that they themselves set’

‘The important thing is not what one is born with, but what use one makes of that equipment.’

When one adopts the point of view of Freudian aetiology, one sees life as a kind of great big story based on cause and effect. So, then, it’s all about where and when I was born, what my childhood was like, the school I attended and the company where I got a job. And that decides who I am now, and who I will become.

An experience of hardship should be an opportunity to look ahead and think, What can I do from now on?

‘Destiny is not something brought about by legend, but by clearing away with one’s own sword.’ He had no use for the power of legend, and would forge his destiny with his sword.

When one is tied to the desire for recognition, the interpersonal relationship cards will always stay in the hands of other people. Does one entrust the cards of life to another person, or hold onto them oneself?

One needs to think not What will this person give me? but, rather, What can I give to this person?

To put it more simply, say you’ve got a score of sixty per cent, but you tell yourself I just happened to get unlucky this time around, and the real me is one hundred per cent. That is self-affirmation. By contrast, if one accepts oneself as one is, as sixty per cent, and thinks to oneself, How should I go about getting closer to one hundred per cent?—that is self-acceptance.

But there is something one must not get wrong at this juncture: the fact that, in every instance, it is ‘that person’ who attacks you who has the problem, and it is certainly not the case that everyone is bad.

Such a father has probably been able to recognise his own worth only on the level of acts. He works all those hours, brings in enough money to support a family, and is recognised by society—and, on that basis, he views himself as having greater worth than the other members of his family.