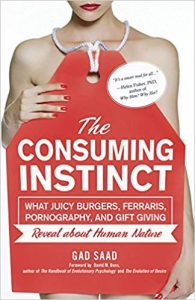 What you will learn from reading The Consuming Instinct:

– How all purchasing decisions can be mapped onto four overriding darwinian pursuits.

– How successful products and industries revolve around lies.

The great majority of consumption acts can be mapped onto one of four Darwinian overriding pursuits:

Reproduction (offering flowers as part of an elaborate courtship ritual)

Kin selection (buying a gift for my nephew),

Successful Products have a connection to our biological heritage:

An infinite advertising budget cannot counteract products that are disconnected from our biological heritage.

Drivers were more likely to honk and to do so more quickly when blocked by a lower-status car. The patience that was afforded to the drivers of the high-status car appears to be a form of social deference commonly seen in various species that establish dominance hierarchies.

“The young always have the same problem—how to rebel and conform at the same time. They have now solved this by defying their elders and copying one another.”

The tension between these two universal forces of human identity (conformity and individuality) is well captured by optimal distinctiveness theory, which posits that humans seek an optimal equilibrium between these two opposing pulls.

Tribal marketing (establishing tribes or brand communities of individuals who possess a passion for a brand and wish to be connected to one another via their common passion) and herd marketing (targeting consumers’ instinct to influence and copy one another akin to the movement of a herd).

These concepts are rooted in an understanding of our biological-based human nature.

Women are undoubtedly more likely to use appearance-related cues in their profiles (e.g., a greater number of photos highlighting their looks), while men are more likely to incorporate cues regarding their social status (e.g., which prestigious schools they’ve attended; occupational status).

The means by which the sexes present themselves to the world is replicated within the online medium, be it on social networking sites or personal web pages. – A woman who has low self-esteem and is looking for a dopaminergic and affective boost will purchase products that are intimately connected to her self-concept.

Specifically, both sexes value intelligence and kindness in their prospective partners. However, given that men place a much greater importance on a woman’s physical beauty (as these serve as important indicators of youth and fertility).

Sexual imagery is more intoxicating to men, and long-term coupling with a high-status partner is a stronger driver of women’s mating preferences.

Celebrities when mentioning or wearing products had luxury items meant to signal one’s abundant resources. As expected, male singers uttered most of such mentions in their songs in comparison to female singers.

What get’s watched, what gets created and what gets attention reveals human preferences.

Countless cultural products are fossils of the human mind or “cultural remains,” as they function as an archival repository of the invariant forces that shape our humanity.

In this sense, television simply recognizes the fact that we have large brains that need constant nourishment. – television also caters to the human need to gossip.

In this sense, television shows constitute a rich “cultural fossil” from which one can glean deep insights regarding the evolution of the human mind.

We develop a sense of intimacy with the celebrities if not the characters they play, and in so doing our brains are tricked into viewing them as part of our Dunbar circle.

The bottom line is that successful products, whether pornography, soap operas, or romance novels, recognise the innate preferences of the target audience in question.

The reason their are sex preferences:

Women’s cost for making a suboptimal mating choice is the same without regard to whether they are impregnated by a short-term or longterm mate. (They get pregnant) Therefore, they are more choosy with their mates.

This is because woman sexual promiscuity creates paternity uncertainty. Thus, males hate a sexual connection over an emotional connection.

The plain reality is that parental investment theory dictates that the sex who has the lesser obligatory investment is more likely to be sexually indiscriminate (men), an element of which is a greater proclivity for sexual variety seeking.

We are weirdly more interested in same-sex (the competition)

The bottom line is that we enjoy sharing social information about the vices and problems faced by same-sex others.

Priming someone for survival – gets attention and memory: In other words, the provision of a “survival prime” results in improved memory.

Most successful products try to hide us from reality:

There are many biological-based realities that are difficult to accept, including aging, mortality, the sexual boredom that can occur in a monogamous relationship, and the fact that children are born with innate differences in abilities. Many of the most successful products ever devised, and ideologies ever espoused, seek to convince us that these realities do not exist.

No need to worry; metrics of beauty are arbitrary, hence you are beautiful in your unique way. This is a wonderful message in terms of protecting prospective customers’ fragile self-esteem.

Incidentally, in many instances, male “beautification” rituals are actually not linked to aesthetic beauty but instead might signal one’s warrior status, rite of passage into manhood, and so forth. In this sense, the ritual is signaling traits valued by women, such as higher social status more so than merely serving as a metric of aesthetic beauty.

We are the only species who experience existential angst due to the recognition of our own mortality.

Humans suffer from numerous insecurities, the most potent of which deal with matters of evolutionary import, including concerns with mortality, romantic relationships, sexuality, parenting, dieting, wellness, status, and social influence.

Accordingly, it is not surprising that numerous peddlers of hope have historically pounced on these Darwinian insecurities and have accordingly sold the desperate-to-believe populace various “foolproof” solutions.

The illusion there is a correct way to do something:

Furthermore, whereas there are a few steadfast rules of good parenting (e.g., consistent forms of discipline coupled with nurturance and love, open lines of communication), there are no magic recipes.

We see humans where there are none:

Generally speaking, humans have an innate penchant to engage in both animism (ascribing agency to inanimate objects) and anthropomorphism (attributing human qualities to nonhuman animals and inanimate objects). See (Mindwise Book Summary for more details into this phenomena)