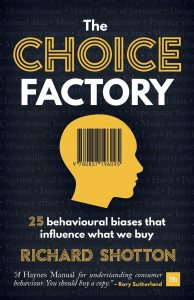 What you will learn from reading The Choice Factory:

– Practical advice on how to use cognitive biases to improve marketing and sales.

– How to improve your marketing efforts by understanding and using social context.

The Choice Factory Book Summary is an exploration of important behavioral biases we all have. It explains how price effects are judgements, how are emotional state effects are actions and why we don’t say what we mean.

We have picked our favourite biases from the book, but there are many more. Check out the full list of cognitive biases or purchase the book to understand all 24 in more depth.

Don’t listen to what people say, look at what they do:

Part of the reason behavioural science findings are sometimes ignored is that advertisers often ask consumers directly about their motivations. However, this assumes that what consumers say and what they do are aligned. Which isn’t true.

Jonathan Haidt says “The conscious brain thinks it is the Oval Office but it is actually the press office.”

That’s the tendency to overestimate the importance of personality, and underestimate that of context, when explaining behaviour.

Remember – The situation, not the person, determines the behaviour.

A communicator must be concerned with unchanging man, with his obsessive drive to survive, to be admired, to succeed, to love, to take care of his own.

Think of the Context – People in a Rush example:

They were so focused on the pressing engagement that it crowded out their ability to fully process other information.

The simplest lesson from the experiment is to avoid communicating when people are rushing.

The most important finding from this experiment is that contextual factors are often more influential than personality in determining behaviour.

The experiment suggests that brands should focus as much on target contexts as they do target audiences.

Their ads refer to their popularity, not among drinkers, but coffee lovers. This ensures the ad resonates with those who class themselves as connoisseurs.

The best tactic is to state your brand’s popularity in a relevant way to your audience.

The way to improve your research is to stop just listening to what customers say and start looking at what they do.

The brands who take the time to convey their social proof messages with charm and wit will be even more successful.

Mention the positive behaviour not the negative

In each situation try to choose a number that harnesses social proof positively not negatively.

There are two types of norm: those referring to how you should behave, called injunctive norms, and those describing how most people behave, known as descriptive norms.

The rule to be distinct – Is to identify the formulaic rules of behaviour in the category you work in and subvert them.

Comparethemarket was how small their marketing team was. They had a tight group of two or three decision-makers. I’m sure this was a factor in their success.

Committees are not conducive to original work. As the comedian Allan Sherman said, “They sit there in committees day after day, and they each put in a colour and it comes out gray”.

As expected the distinctive item was the most memorable but the effect was more pronounced among the younger group.

“the safety is in doing what everyone else is doing.” – Which is exactly why creatives think it’s wrong. Creatives want to be different, to stand out from the environment.

John Hegarty put it in his ad for black Levi’s “when the world zigs, zag”.

These habits account for a significant proportion of our actions, but they’re normally invisible; revealed only when our environment changes.

Life events -by  life event I mean important changes, such as getting a new job, starting university, having a baby or getting married.

Aim to advertise at moments of reflection e.g. nine-enders were more likely to question the meaningfulness of their lives.

Interestingly, for marketers, this introspection often leads to action.

Any means by which you can distance the consumer from the tangibility of money will reduce price sensitivity.

When the prices were shown as a daily figure they were five times more likely to be rated as a great deal than when they were shown annually.

Consumers overemphasise the sum quoted and place too little weight on the time frame.

When consumers don’t trust brands they treat deals sceptically, but when they’re accompanied by a back story they have more heft.

Reveal gender expectations about promiscuity. Men exaggerate their promiscuity, while women downplay it.

First, consider asking respondents how they think others might behave.

Direct questioning is unsatisfactory because of lying and confabulation.

When people aren’t aware they’re being monitored they behave naturally.

What people search for – Instead they search for vitamins by what they do, such as helping with muscle growth or shiny hair. (Benefit driven) People are looking for a specific desired result or to alleviate a perceived pain.

Useful insight for a vitamin brand as it suggests they should label and package their vitamins according to the problem they solve, not the particular vitamin they contain.

If each technique tells us the same story then we can give it greater credence. If they jar, then we need to generate a hypothesis to explain the contradiction.

When we are in a good mood it signifies an absence of danger and, therefore, mitigates against the need to think critically.

When compared to a higher priced brand, even an expensive car looks better value.

Change competitive set – The presence of wine increased willingness to pay because it established a different comparison set to beer. Weirdly you make the can smaller. Suddenly people think this is a different category of drink for which different price points apply.

The introduction of a high-end option changed the dynamics. The middle option became much more popular – 57% chose it, compared to 22% for the cheapest option. Buyers are often uncertain about what makes for a good product – they worry that the expensive option will be overpriced and the cheapest will be shoddy.

One theory is that our limited cognitive capacity means that our memory is saturated by the earliest items and our ability to store later information is compromised.

First, be single-minded in your communications.

If a brand establishes a strong association with one positive characteristic it will colour other attitudes. – Instead focus on the values that are easiest to be associated with.

Launch – Marketers need to invest a disproportionately large proportion of their budget into their launch.

That’s a doubling of the price – just by improving the presentation. In contrast, when a drink is unknown the serve forms a much greater proportion of the consumer’s knowledge and generates a more sizeable effect.

Insight – Presentation is as important as product

Why good copywriting is like a china plate – forges expectations. – Detailed descriptions boosted taste and appeal by 7% and 13% respectively.

Consumers believe that products involve a trade-off: improved eco-friendliness entails corresponding loss in cleaning efficacy. – You need to investigate the set of expectations associated with your positioning.

The experiments prove that it’s hard to overturn negative opinions. Rejecters of your brand are difficult to convince because they interpret your message through a lens of negativity.

One size fits all – Part of its appeal is that it offers a simple recipe for success: an off-the-shelf solution that works regardless of the nuances of the brand or category.

Be sceptical about anyone who claims to have a universal key to success.

The idea of a marketing approach that works in all situations is flawed.

In a competitive market economy, performance is fundamentally relative, not absolute. Meaning competition, and other factors play a key factor in performance.

The media context that an ad appears in affects its interpretation. Information is not processed neutrally. We are swayed by contextual cues. A message in a highly respected title will gain credibility from the environment.

The importance of waste – Advertising known to be expensive signals the volume of the resources available to the advertiser. Brands must recognise that much of advertising’s impact comes from perceived waste.

Kay further states that since advertising tends to recoup its costs in the long term.

16 – The curse of Knowledge

Ad design suffers because the way brand managers approve ads is at odds with how consumers experience them.

Find out if your audience are maximisers or satisficers. – Maximisers want to know that their product is perfect; satisificers want reassurance it won’t be rubbish.

In contrast, reassurance comes from stressing the popularity of a brand.

Goodhart’s Law. This states: When a measure becomes a target, it ceases to be a good measure.

Setting a naive target encourages behaviour that superficially meets that goal rather than the underlying objective.

How to track brands better – Instead, digital brand tracking should measure the difference in attitudes between those in the target audience exposed to the ads and a control group, unexposed to the ads. – Large digital campaigns only need to allocate about 1% of their media budget to fund this tracking. The learnings will quickly pay for themselves.

Tracking data is reductive. It takes a complex, messy reality and converts it into easily manageable numbers. This process involves a trade-off: a loss of representativeness in return for simplicity.

Expecting any methodology to be perfect is to burden it with unreasonable expectations. Instead, you need to be aware that it merely provides evidence to which you need to apply your discretion and judgement.

Everyone assumes that brands are fallible, so if a brand is open about its failings, it can persuade consumers that its weaknesses lie in inconsequential areas.

When is it suitable – If you work in a category typified by overly positive descriptions, such as luxuries, cars or cosmetics, then this approach might be suitable.

The principal-agent problem ensures it will always be a distinctive approach.

New targeting methods – what is known is copied.

Instead they need to adapt their bidding tactics by creating a contrarian set of metrics to identify their audience.

The formulaic targeting of most brands means there are opportunities for canny brands. One under-exploited opportunity is to target people by the browser they use.

Identify the moment when a target audience becomes valuable

There are regular and predictable moments when their spending spikes. One such moment is payday.

Ballet critic, Vadim Gayevsky, said: The audience does not trust itself, it trusts someone else.

Things are funnier if experienced in group – experiences are shared.

In contrast, ads watched in groups of three and six were reported to be 21% and 10%, funnier than those watched alone.

The key point is that the funniness of an ad is not solely a creative issue but also one of media placement.

The potential upside is large and the downside is minimal, then insisting on 95% certainty is misguided.

In other words, don’t apply biases randomly – employ scarcity at romantic moments and social proof at fearful ones.

One of the ways our brains determine what is worthy of conscious attention is personal relevance – this is termed the cocktail party effect.

Double edged sword – Localisation is relevant enough to attract attention, without being personal enough to offend.

They ignore ads about generic, average savings as they suspect that vague claims may hide misleading statistics. – Specificity key.

Limit the number of products that consumers can buy.

Ensure that the anchors that you communicate increases sales Anchoring occurs when exposure to a number serves as a reference point for subsequent decisions.