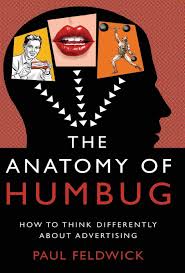 What you will learn from reading The Anatomy of Humbug:

– Different schools of thought in advertising.

– How to think differently about advertisings purpose and how it works.

– The 6 core narratives of what advertising is.

The Basics of Advertising:

What are we selling?

To whom are we selling it?

Where are we selling it?

When are we selling it?

How are we selling it?

‘The Proposition is the strongest competitive promise on behalf of a product or service that can be made to the consumer in terms of his (sic) own self-interest. It must be truthful, demonstrable and unique – clearly elevating the product or service over the competition.’

The Enlightenment Narrative – “This changes everything”:

The Enlightenment narrative always overclaims for the power of new approaches, whatever they are, and it equally dismisses anything prior as obsolete.

The idea that ‘the world has changed and the old rules no longer apply’ has been a popular one for a long time in marketing and advertising circles.

But, mysteriously, the world hasn’t changed that much. People are still buying brands: they’re still visiting Starbucks and McDonald’s, drinking Coca-Cola, and thinking how cool Apple is.

Ask the important question – do these changes, however wide reaching and important they are, support a narrative that renders the previous history of advertising irrelevant? Do people still not have the biological drives that they had years ago?

Be Careful of narratives and myths – What I mean by a myth is a story that encodes, in a memorable form, deep beliefs about the way things are.

As Derek Sivers the truth is always in the nuance.

You need to think critically:

As long as we accept all this uncritically as just ‘common sense’, we are as Keynes said, slaves to it.

Our most fundamental assumptions, the ones we never questioned or never even articulated – they were the echoes of some long-dead copywriter with a gift for words.

Hopkins’s promise, and no doubt the secret of his book’s success was a copywriter he had a talent for understanding and promising what his prospects wanted to hear.

The logical part he was happy to share, but the creative magic was the agency’s own secret. Therefore, he gives you a rough framework but no the nuance that made his agency perform so well.

But typically, no-one realises that they are unconsciously arguing to a script written some eighty years ago by people they have probably never even heard of.

When it came to advertising his strength lay in having a very clear and simple set of beliefs about how to do it, and the ability to communicate these to his clients.

Reeves’s emphasis on ‘the single-minded proposition’ in a successful ad is perhaps the most commonly and deeply held belief in agencies. This is the belief that your proposition or sales message should contain one clear message an no more.

Reeves offered no evidence for his claim that ‘people remember only one thing from an advertisement’, and I for one don’t believe it’s true.

The reality is up to debate whether people can process more than one message in an advertisement. But, as with most common knowledge is rarely questioned.

Remember all humans, at all costs, want to retain the illusion that they are guided by rational factors. (Dichter, p.24)

The main idea Dichter borrowed from Freud was that people’s own motivations and reasons for their actions are normally unknown to themselves, and their own explanations of their behaviour are just empty post-rationalisations.

Pierre Martineau, who published in 1957 a book which he called Motivation in Advertising said the following:

“advertising leans heavily on such other psychological processes as suggestion, association, repetition, identification, fantasy, etc. … so much more is going on than just a sales argument with the consumer. (p.13)”

‘People… are changeable, suggestible, highly non-rational, motivated far more by emotion and habit and unconscious causes than by reason and logic.’ (p.28)

The Advertising Debate – The role of Creatives vs Planners:

For a speaker on advertising not to express the importance of creativity in getting attention to an ad and making the product advantage memorable is almost criminal negligence.

But remember, theories of how advertising works are not innocent. They are intimately bound up with power relations, and also with deeper world views which legitimate power relations.

Power relations are inevitable as it’s in our nature. Ignore it at your own peril.

People experience advertisements as a whole:

But there has always been a strong school of dissent. Stephen King pointed out in 1965 that to separate style and content is an artificial exercise. A consumer responds to a message as a totality.

Using the idea of the ‘gestalt’ or whole to emphasise that this was how consumers experienced brands – as a totality, not as a collection of elements.

People choose their brands as they choose their friends. You choose friends not usually because of specific skills or physical attributes (though of course these come into it) but simply because you like them as people. It is the total person you choose, not a compendium of virtues and vices. (Lannon and Baskin, p.32)

‘We believe that if you’re going to invite yourself into someone’s living room for thirty seconds, you have a duty not to bore them or insult them by shouting at them. On the other hand, if you can make them smile, or show them something interesting or enjoyable – if you’re a charming guest – then they may like you a bit better, and then they may be a little more likely to buy your product.’

Five proposed ways that advertising works: these are • familiarising • reminding • spreading news • overcoming inertias • adding a value not in the product.

Information Or Persuasion — Verbal or Imagery?

‘When I go into a restaurant – and they bring me the bill – and it says at the bottom, Service not included – [longish pause] – is that information, or persuasion?’

More importantly, notice the importance of non-verbal imagery. A headache is visualised as a hammer beating on a skull, with a painful noise, only relieved by the pill; and as in so many Bates ads, most of the information is delivered by a man in a white coat.

There are plenty of simple verbal messages that may well evoke an emotional, and also a behavioural response: • Your flies are undone! • I’m leaving you for another man! • The kitchen’s on fire!

Preference for a brand will be influenced by seeing others use it, by the conversations we share about it, or merely by the perception that a brand is popular with others – a perception which advertising of sufficient ubiquity may help to create.

The second axiom acknowledges that communication does not take place as a single, one way transmission but is a continual exchange.

The third axiom – all communication is not just about content, but about relationship. Let’s examine that a bit further.

On this model, what Watzlawick means by digital communication is any message with content that is finite, replicable, and precise.

Analogic communication on the other hand is less precise, more gestural, more ambiguous. (And in the words of G.H.Mead, ‘the meaning of a gesture is given by the response’.)

Analogic communication is the default in human relationship building, you make inferences from actions. You don’t have clarity on why they are behaving or saying the things they do.

Advertisers often hamper their own work by insisting that they will only run advertising that they can explain in a logical way.

It is a bit like trying to make friends with someone by preparing ever more clever things to say about the weather, while forgetting to smile.

The TV creates the friendly relationship; the print gets on with the practical detail and closes the sale.

Or as Stephen King would have put it – the TV creates saleability, the print creates the sales.

Bernays’s preferred modus operandi was always, where possible, to remain invisible. He disdained the term ‘press agent’ and claimed he never needed to ask editors for help: instead he helped to create news events and stories which they could not resist covering.

Indeed Bernays repeatedly says this is not how public relations works: Abstract discussions and heavy facts… cannot be given to the public until they are simplified and dramatized.

But fundamental to it all, I think, was a bigger notion: that public opinion, culture, the world of meanings that we share, is not absolute but always there to be influenced – and that if you don’t influence it yourself, others will.

The business man and advertising man is realizing that he must not discard entirely the methods of Barnum in reaching the public. (Bernays, p.101)

But, what was the method that Barnum used?

For Barnum there was no such thing as bad publicity – he revelled in the controversies about whether his exhibits were real or fakes, often deliberately deceiving his customers one way or another.

Barnum himself explains it as follows: ‘“humbug” consists in putting on glittering appearances – outside show – novel expedients, by which to suddenly arrest public attention, and attract the public eye and ear… An honest man who thus arrests public attention will be called a “humbug”, but he is not a swindler or an impostor.’

Humbug, as Barnum promotes it, is about shamelessly rigging the odds in your favour. It’s going with your gut feeling. It’s sticking your neck out and not worrying too much what others might think. It believes that there’s no such thing as bad publicity.

Remember – Rules are there to be broken:

Creative people and marketing people alike each go to the same schools, learn the same things, and the same things they learn are too often a third-hand mash-up of Reeves’s USP theory and Bernbach’s vague creative rhetoric.

“I have been inspired by reading about what our predecessors in this profession did, as well as what they wrote; it’s striking that none of them, in practice, felt constrained by their own rules.” Paul Feldwick

Again, we could liberate ourselves by learning to read the past appreciatively, as a source of inspiration, rather than as a source of rules and precedents.

Jungian analyst, James Hillman: My idea about ideas is that they first need to be entertained. Then they may spark better ones in your mind and can lead to unforeseeable implementation in your life. p.19

“My purpose in writing this book, however, is to urge advertising professionals not to allow their thinking, or their imagination, to be constrained by what happens to be fashionable.” Paul Feldwick