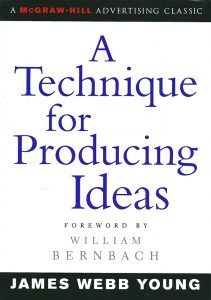 What you will learn from reading A Technique for Producing Ideas:

– How to generate more ideas in your life.

– The five steps of idea generation.

– Why it’s best to let problems fester and grow in your mind.

The Principles of Creativity:

In learning any art the important things to learn are, first, Principles; and second, Method. This is true of the art of producing ideas.

Particular bits of knowledge are nothing, because they are made up, of what President Hutchins has called rapidly aging facts. Principle and method are everything.

The first of these has already been touched upon in the quotation from Pareto: namely, that an idea is nothing more nor less than a new combination of old elements.

The second important principle involved is that the capacity to bring old elements into new combinations, depends largely on the ability to see relationships.

Consequently, the habit of mind which leads to a search for relationships between facts becomes of the highest importance in the production of ideas.

First, the gathering of raw materials – both the materials of your immediate problem and the materials which from a constant enrichment of your store of general knowledge.

Second, the working over of these materials in your mind.

Third, the incubating stage, where you let something beside the conscious mind do the work of synthesis.

Fourth, the actual birth of the Idea – the “Eureka! I have it” stage.

And fifth, the final shaping and development of this idea to practical usefulness.

The first of these steps is for the mind to gather its raw material.

The materials which must be gathered are of two kinds: they are specific and they are general.

In advertising, the specific materials are those relating to the product and the people to whom you propose to sell it.

Dig below the surface:

If the surface differences are not striking we assume that there are no differences. But if we go deeply enough, or far enough, we nearly always find that between every product and some consumers there is an individuality of relationship which may lead to an idea.

Every really good creative person in advertising whom I have ever known has always had two noticeable characteristics.

First, there was no subject under the sun in which he could not easily get interested-from,

Second, he was an extensive browser in all sorts of fields of information.

In advertising an idea, results from a new combination of specific knowledge about. products and people, will general knowledge about life and events.

Capture your ideas and information:

You will remember, the famous scrapbooks which appear throughout Sherlock Holmes stories, and how the famous detective spent his spare time indexing and cross-indexing, the odd bits of material he gathered there.

Once I jotted in a book the question: “Why does every man hope his first child will be a boy?” Five years later it became the headline and idea for one of the most successful advertisements I ever produced.

What you do is to take the different bits of material which you have gathered and feel them, as it were, with the tentacles of the minds. You take one fact, and turn it this way and that, look at is in different lights, and feel for the meaning of it. You bring two facts together and see how they fit.

In this third stage you make absolutely no effort of a direct nature. You drop the whole subject, and put the problem out of your mind as completely as you can.

What you have to do at this time, apparently, is to turn the problem over to your unconscious mind, and let it work while you sleep.

You remember how Sherlock Holmes used to stop right in the middle of it case, and drag Watson off to a concert? That was a very irritating procedure to the practical and literal-minded Watson. But Conan Doyle was a creator and knew the creative process.

Another point I might elaborate on a little is about words. We tend to forget that words are, themselves, ideas. They might be called ideas in a state of suspended animation. When the words are mastered the ideas tend to come alive again.

Thus, words being symbols of ideas, we can collect ideas by collecting words. The fellow who said he tried reading the dictionary but couldn’t get the hang of the story, simply missed the point that it is a collection of short stories.