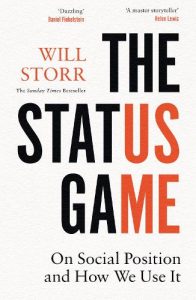 What you will learn from reading The Status Game:

– Why faith is often incentivised over trust and why ideology often trumps science.

– How are beliefs can become status symbols.

The Status Game is another great read from Will Storr, you could say this is the sequel to this book Selfie. As you can guess from the title, this book explores the role status plays in human life. I was particularly shocked when he analysed the creation of Nazi Germany as a Status Game which goes to show the power some of these games can have. It’s also interesting to consider the role humiliation plays in human violence because of it’s link to status.

Perception as a reward space:

The human brain is specialised for the games we evolved to play. Neuroscientist Professor Chris Frith writes that it ‘represents the world as a reward space’. It’s coded to discover ‘the valuable things in the world and what actions we need to take to get them .. everything around me exerts a push or a pull because my brain has learned to attach value to them’. As we’ve learned, humans value connection and status.

In order to earn the resources essential for our survival and reproduction, we seek to bond with our co-players; in order to secure more of those resources we seek rank. But how do we gauge this rank? How do we tell how we’re doing in this game of life? We do it, in part, by assigning values to objects. A Cartier watch is worth this much status; a Casio watch is worth that. These ‘status symbols’ tell us, and our co-players, how we’re performing. We pay obsessive attention to them.

We can never see precisely where players sit versus us in the rankings. We can only sense it from symbols to which we’ve attached particular values. In order to manage this process, the subconscious has a ‘status detection system’ that includes mechanisms that read ‘relevant cues in the environment to assess status’.

The brain craves a path and progress:

The dream feels so real. And yet it’s all conjured up by the game-making brain. The world around our bodies is chaotic, confusing and mostly unknowable. But the brain must make sense of it. It has to turn that blizzard of noise into a precise, colourful and detailed world it can predict and successfully interact with, such that it gets what it wants.

When the brain discovers a game that seems to make sense of its felt reality and offer a pathway to rewards, it can embrace its rules and symbols with an ecstatic fervour. The noise is silenced!

The chaos is tamed! We’ve found our story and the heroic role we’re going to play in it! We’ve learned the truth and the way the meaning of life!

Symbols as signals of shared meaning:

The anthropologist Professor Robert Paul writes that our pursuit of symbolic status ‘has to do with the fact that human social life inherently depends on there being a public arena in which symbols can be made available to perception and shared by many people’.

People who have connected ‘share in the perception of these symbols, and incorporate them into their own thinking, feeling, and identity’, which ‘means that they experience their associates as “kin’

It’s in this way that we exist as a tribe, a culture, a people. We come into being as a collective when we connect with like-minded others whose brains process reality in similar ways; who dream the same dream of life. We recognise the same symbols; play the same game. As we do, we become the source of each other’s status, the people of the yam. We see the yam, we know what it means, we experience a profound sense of connection with those who perceive this reality as we do.

Humiliation and removal of status:

If humans are players, programmed to seek connection and status, humiliation insults both our deepest needs. And there’s nothing we can do about it. They have effectively lost the voice to make claims within the relevant community and especially to make counterclaims on their own behalf to remove their humiliation.’

The only way to recover is to find a new game even if that means rebuilding an entire life and self. Many humiliated individuals find it necessary to move to another community to recover their status, or more broadly, to reconstruct their lives.’

But there is one other option. An African proverb says, ‘the child who is not embraced by the village will burn it down to feel its warmth’. If the game rejects you, you can return in dominance as a vengeful God, using deadly violence to force the game to attend to you in humility. The life’s work of Professor Gilligan led him to conclude the fundamental cause of most human violence is the ‘wish to ward off or eliminate the feeling of shame and humiliation and replace it with its opposite, the feeling of pride’.

When we formed settled societies, chiefs, kings, priests, prime ministers and CEOS had their high status confirmed in titles and rituals, acts of enforced deference and splendour. And so two parallel games began to be played: the formal game, announced in the grand hierarchies of culture, economy and society, and the informal true game, that continued to occur in the minds of the players.

There are games within games:

Adolescent students learn a harsh lesson of human life: not only are there hierarchies of status within games, the games themselves form a hierarchy, with some nearer the top, and others lower down.

Value systems can be changed:

This is how youthful idealism stales and grows mould. They arrive at their big firm to discover a new set of rules and symbols, a new game to play: they must compete using wealth as a symbol of status.

Their indoctrination will be delicate but emphatic: ‘the culture will pressure you in many subtle ways to replace your values with the systems’.

Humans aren’t heroes on wondrous journeys of progress, we’re players programmed for games. To succeed in these games, we seek high-status allies. When we find them, our copy-flatter-conform circuitry switches on. We mimic not just their behaviour but their beliefs. The better we believe, the higher we rise. And so faith, not truth, is incentivised.

When people accept a core belief and act on it, as the price for earning connection and status, they allow themselves to become possessed. That belief is now a status symbol. As their hallucination of reality bends itself around it, they become its host and crusader, deranged and impossible to reason with. In short, their belief has become sacred.

Our status games are embedded into our perception. We experience reality through them. So when we encounter someone playing a rival game, it can be disturbing. If they’re living by a conflicting set of rules and symbols, they’re implying our rules and symbols our criteria for claiming status – are invalid, and our dream of reality is false. They’re a sentient repudiation of the value we’ve spent ourI lives earning. They insult us simply by being who they are. It should be no surprise, then, that encountering someone with conflicting beliefs can feel like an attack: status is a resource,

One investigation found those most likely to circulate ‘hostile political rumours’ including conspiracy theories and ‘fake news’ on social media were often ‘status-obsessed, yet socially marginalised’, their behaviour fuelled by a ‘thwarted desire for high status’, their aim, to ‘mobilise the audience against disliked elites’.

A true cult member has one active identity. Players attracted to them are often those who’ve failed at the games of conventional life. Alienated, injured and in need, their brains seek a game that seems to offer certainty, in which connection and status can be won by following an absolutely precise set of rules.

We didn’t like the rules of the world, so we created our own. It was a utopia.’ Brains want to know, who do I have to be to earn connection and status? Ti and Do wove a fantastic dream that offered precise instructions, telling them exactly who to change into. And so that’s what they did.

For most Germans, the Nazi game became the only one that could offer significant status.  As the goldrush grows, the game attracts new players, drawn to its increasingly splendid rewards; as it becomes more powerful, more and greater status is made available; it becomes larger and more powerful still.

There’s a critical warning in all this: tyrants often start by telling you what you already believe. When they arrive, they weave an irresistible self-serving dream, promising that you deserve more status, just as you’d always suspected, and pointing accusingly at those you’d already figured to be your enemies, big business, Communists, Jews. They make accusation and gossip; you become angry, enthusiastic and morally outraged. You begin to play. Once they’ve got you, they tighten up.

Partly through effective propaganda, Hitler himself became highly symbolic of the resurgent Germany: by the logic of the status game, he became sacred, the literal equivalent of a god, a figure that symbolised all that his players valued and who, in effect, was their status.

One contemporary observer, Otto Dietrich, wrote: ‘We see in him the symbol of the indestructible life-force of the German nation, which has taken living shape in Adolf Hitler.’

Any attempt at defence or retaliation implies their dream is an illusion and their criteria for claiming status is therefore false. This is disturbing to them. It often triggers a response of overwhelmingly disproportionate dominance. So morally outraged are they by insubordination from their subhuman targets, they strike back on the principle of two eyes for an eye – or two hundred eyes, or two thousand, or however many they consider morally equivalent to their precious one.

Genocide and declines in status:

Sociologist Professor Bradley Campbell has undertaken an extensive study of our most bestial mode of play. He finds genocides can happen when a high-status group, ‘experiences a decline in or threat to its status’ or a low-status group ‘rises or attempts to rise in status’.

It’s the reduction in rank between them that helps generate much of the horrible madness. Toxic morality is deeply implicated in these episodes: ‘genocide is highly moralistic’. Genocides are dominance virtue games, carried out in the name of justice and fairness and the restoration of the correct order. They’re not about the mere killing or ‘cleansing’ of foes, they’re about healing the perpetrators’ wounded grandiosity with grotesque, therapeutic performances of dominance and humiliation.

Studies suggest religious belief doesn’t fall upon populations as charismatic holy men ride into towns on pony-back and convert them en masse. Rather, it spreads through personal connections, as friends and family members convince those close to them to join.

The world isn’t heroes and villains:

The route forward is more likely to be found if we muster the wisdom to see through the moral cartoon and understand the world not as populated by dragons and dragon slayers, but by players negotiating trade-offs.

I believe we can all take consolation in the knowledge that nobody ever gets there, not the superstars, the presidents, the geniuses or the artists we gaze up at in envy and awe. That promised land is a mirage. It’s a myth. In our lowest moments, we should remind ourselves of the truth of the dream: that life is not a story, game with no end. This means it isn’t a final victory we should seek but simple, humble progress: the never-ending pleasure of moving in the right direction. Nobody wins the status game. They’re not supposed to. The meaning of life is not to win, it’s to play.