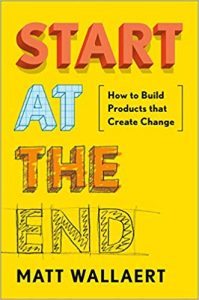 What you will learn from reading Start at the End

– How to dissect the pressures that lead to a behaviour.

– How identity and values effect your behaviour.

– Techniques to identify the key levers to change someones behaviour.

Then it built a device that guided people to do that, not by “challenging the status quo” in every aspect but by asking “Why would people want to do that in the first place?” and “Why aren’t they doing it already?”

This is behavioral science, and part of science is a willingness to be wrong. That’s why good managers reward invalidating an insight as much as validating one.

We don’t know why we behave the way we do:

Qualitatively, we can start to ask questions about their cognition, what trade-offs they make, and where they would like to be spending more time. But always take their answers with a grain of salt.

As social psychologist Tim Wilson (borrowing from Nietzsche) put it, ‘we are strangers to ourselves, since our nonconscious mind does immense amounts of the work and our conscious mind is filtering perception through myriad biases.’

What we spend resources on is a big part of our identity (“I’m the kind of person who takes time to find the best computer components”) and we know how powerful identity is as a pressure.

Matt uses an example to do with his mother. She was a severe technophobe but, by linking computers to care, someone changed his mother’s behaviour around computing such that she eventually transferred to informatics and changed the course of her life.

By changing the meaning of something you can influence behaviour, particularly if this new meaning undermines someones objections of using something. Matt’s mothers core identity revolved around care giving, so once the use of computers was linked to her achieving that identity, her behaviour changed instantly.

A choice made in a crowded bar is different from one made in a quiet office. Is your population likely to be tired or alert? Drunk or sober? Hungry or sated? All of these have implications for the amount of free cognitive resources they are likely to have and thus how they behave. 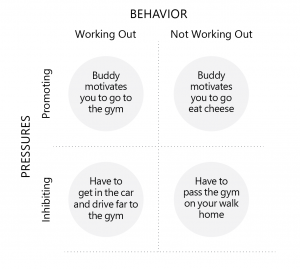 But let’s be clear: inhibiting > promoting. Part of it is identity related. Advertisers and marketers love promoting pressures.

Because we typically are creating behavioral statements that are about getting people to do something more and not less, we have a natural tendency to gravitate toward promoting pressures. Which means that one of the reasons focusing on inhibiting pressures tends to be so powerful is that it is the set of pressures we have most likely ignored. This ignorance means it is fertile ground for new interventions.

When it comes to promoting and inhibiting pressures, a feeling is as powerful as a fact (often more so). Though our engineers insisted that lack of privacy wasn’t a technical problem, I convinced them that we needed to address teachers’ feelings and proved it by suggesting the engineers call their moms and ask about search engines spying on people. So, it can often be a perceptual problem.

That’s because Frito-Lay, with over 55,000 employees, does something that very few companies in its industry do: it listens to them.

In their employee onboarding training, they’re encouraged to call the CEO whenever they think it is warranted (strong promoting pressure), and the CEO’s direct office number is given (reduced inhibiting pressure).

Generating insights horizontally-that is, agnostic of hierarchy-throughout a company works for many reasons.

Your brain is a cognitive miser: it relies on biases and heuristics and cues from the environment simply because it is motivated to conserve your mental resources. A cognitive burden is thus something which takes up unnecessary cognitive energy.

For example, we use Uber to remove the cognitive burden of searching, flagging and paying for a taxi.

The concept is important as it can be hard to remember these cognitive burdens once you’ve given them up, but if you end up in a city that doesn’t have Uber, you’ll have a sudden jolt of panic as you leave the airport: how the hell are you getting to your hotel? And where the hell is it, anyway?

Conflicting Pressures show what people are battling for:

What did Uber want you to do on a Friday night? Go out (and preferably get drunk, so you couldn’t drive home).

What did Netflix want you to do on a Friday night? Stay in.

Those are mutually exclusive behaviors, and so a battle was required. This is one of the hidden beauties of the behavioral statement: it can help you find novel competitors and potential partners, simply by seeing whose limitations, motivations, and pressures align and collide with your own.

Values play an important role because they have a transformative effect on other pressures. Values are like coloured glasses, acting on our perception to modify how we process cues. Values identify what something means in a situation.

Behaviour Interventions and Free Will:

Who the fuck says something like that? To be clear, “But they have free will!” is a bad defense of any intervention. By creating specifically to produce a behavior change, you accept responsibility for the result of that behavior change.

Just as tobacco companies can’t simply say “But people can stop smoking at any time” as they spend billions on advertising that they know makes stopping harder,

Designing for habit and the reprogramming of the brain is simply unethical, as it explicitly circumvents our intentions by exploiting the brain’s need to save cognitive resources and create shortcuts.

Because a successful intervention is about creating a world that doesn’t currently exist, you’ll always need to be working through thought experiments and inhabiting imaginary realms. And sometimes those are worlds we explicitly don’t want, so that we can more clearly see the world we do.

When [population] wants to [motivation], and they [limitations], they will [behavior] (as measured by [data]).

That’s why we have to be specific in a behavioral statement about not only the behavior we want but also the population and context in which we want it. All pressures interact with context, in terms of changing both their strength and even, in extreme cases, their direction.

Whether an intervention succeeds or fails depends on how we define our behavioral goal. If the desired outcome was cooking Indian food, my Thai-seeming cuisine failed spectacularly. But if the goal is bringing people together, then there are many ways to service that goal.

Pressure Mapping (what pressures are effecting behaviour in this situation?):

During the gathering of potential insights, we can ask questions about the in-group and out-group roles for our populations. We can then map the pressures associated with those roles using both links to values and the specific behaviours they create.

Again, the trick to getting good at pressure mapping is learning to let go of your natural assumptions, to see the irrational and the counterrational as opportunities.

But I didn’t even fully list the pressures. What about cost? Pure availability? The fact that it has to be done at a specific time and place by a medical professional?

People talking about unstable preferences just sound different. They tend to trail off fairly quickly when it comes to group favorite, their stories are meant for quick group affiliation (I swear I’m discussion, because their favorite is the one of you!), and they are unlikely to relate the subject to anything deeply personal to them.

If you want to find the stable, special, snowflake parts of a person, consider what they do when they’re alone.

Remember what identity needs are being honored in each case: stable is more about yourself and unstable is about the group.

Be warned! You have to be cautious of people with unstable preferences (once again, taken personally, more avoided). Because their primary drive is belonging, they’re therapy much more sensitive to the herd than their stable counterparts. Which means that if whatever group they want to be a part of happens to be made up of dislikers, they’ll drop you like a hot potato.

By focusing on PC and software sales, Microsoft neglected the behavior that is computing itself. Contrast this with Apple, which never sold a computer that didn’t come with an explicitly compatible operating system-this meant there was no potential confusion over whether the hardware or the software was to blame for anything less than a great experience. There’s never any worry that a new MacBook or iPhone model will crash under the weight of its accompanying OS, because Apple focused on usage from the start.

We believe things we hear from others:

Particularly with apocryphal and external insights, people will speak with confidence based simply on something they heard from someone else, in some insane game of telephone that usually butchers whatever the original insight was.

Create extremes and see what people gravitate too:

‘So I used one of the techniques that you’ll find invaluable if you do this long enough: posit the extremes and see where people gravitate.’ Matt Wallaert

The basic disagreement was over engagement (how often someone used Yammer) versus business value (how often they created something that helped the company).

So he suggested the following thought experiment: Imagine two people. One logs in to Yammer every day, chats it up with everyone, is highly engaged, but never creates business value whatsoever. The other logs in only once, talks any to only one person, but creates massive business value. Which one would you rather have?

The answer revealed the preferences of the company helped with forming the behaviour they wanted to create.