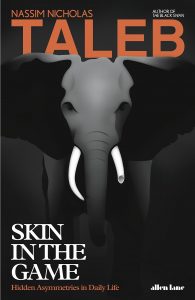 What you will learn from reading Skin in the Game:

– Why skin in the game is an incredibly important mental model to understand the world.

– Why removing skin in the game reduces learning.

– Why enforcing skin in the game will make society more equal.

What is Skin the Game?

Skin in the Game is about the distortions of symmetry and reciprocity in life: If you have the rewards, you must also get some of the risks, not let others pay the price of your mistakes. If you inflict risk on others, and they are harmed, you need to pay some price for it.

Skin in the game, applied as a rule, reduces the effects of the following divergences that grew with civilization: those between action and cheap talk (tawk), consequence and intention, practice and theory, honor and reputation, expertise and charlatanism, concrete and abstract, ethical and legal, genuine and cosmetic, merchant and bureaucrat, entrepreneur and chief executive, strength and display.

If you do not take risks for your opinion, you are nothing.

What happens when you don’t pay for your actions:

When people aren’t punished for mistakes or face the downside we end up populating what we call the intelligentsia with people who are delusional simply because they never have to pay for the consequences of their actions, repeating modernist slogans stripped of all depth.

The intelligentsia therefore feels entitled to deal with the poor as a construct; one they created. Thus they become convinced that they know what is best for them.

These types of people are also incapable of distinguishing between multidimensional problems and their single dimensional representations like stripping the multidimensional nature of health health to it’s cholesterol-reading. They can’t get the idea that, empirically, complex systems do not have obvious one-dimensional cause-and-effect mechanisms, and that under opacity, you do not mess with such a system.

You don’t learn when you are not the victims of your mistakes. Therefore transferring the risk and the downside of your actions impedes learning. More practically, you will never fully be convinced you are wrong; unless you face consequences of your actions.

So, entire fields become charlatanic because of the absence of skin in the game connecting them back to earth and creating the feedback mechanism that weeds out the wrong.

There is always an element of fools of randomness and crooks of randomness in matters of uncertainty; one has a lack of understanding, the second has warped incentives. One, the fool, takes risks he doesn’t understand, mistaking his own past luck for skills, the other, the crook, transfers risks to others.

No person in a transaction should have certainty about the outcome while the other one has uncertainty.

Forecasting (in words) bears no relation to speculation (in deeds).

I personally know rich horrible forecasters and poor “good” forecasters. Because what matters in life isn’t how frequently one is “right” about outcomes, but how much one makes when one is right. Being wrong, when it is not costly, doesn’t count-in a way that’s similar to trial-and-error mechanisms of research.

By definition, what works cannot be irrational; about every single person I know who has chronically failed in business shares that mental block, the failure to realise that if something stupid works (and makes money), it cannot be stupid.

In science, belief is literal belief; it is right or wrong, never metaphorical. In real life, belief is an instrument to do things, not the end product. This is similar to vision: the you in the best possible way, and get you out of trouble when needed, or help you find prey at a distance. Your eyes are not sensors designed to capture the electromagnetic spectrum. Their job description is not to produce the most accurate scientific representation of reality; rather the purpose of your eyes is to orient most useful one for survival.

Judging people by their beliefs is not scientific. There is no such thing as the “rationality” of a belief, there is rationality of action.

Simon formulated the notion now known as bounded rationality: we cannot possibly measure and assess everything as if we were a computer; we therefore produce, under evolutionary pressures, some shortcuts and distortions.

The rationality of an action can be judged only in terms to evolutionary considerations.

Rationality does not depend on explicit verbalistic explanatory factors; it is only what aids survival, what avoids ruin.

Why? Clearly as we saw in the Lindy discussion:

Conflicts of Interests and Complexity:

Things designed by people without skin in the game tend to grow in complication (before their final collapse).

There is absolutely no benefit for someone in such a position to propose something simple: when you are rewarded for perception, not results, you need to show sophistication. Meanwhile, these people pay no price for the side effects that grow nonlinearly with such complications.

A saving by the brothers Geoff and Vince Graham summarises the ludicrousness of scale-free political universalism.

I am, at the Fed level, libertarian;

at the state level, Republican;

at the local level, Democrat;

and at the family and friends level, a socialist.

If that saying doesn’t convince you of the fatuousness of left vs. right labels, nothing will.

Scientific Progress is driven by falsification:

Science isn’t the sum of what scientists think, but exactly as with markets, it is a procedure that is highly skewed. Once you debunk something, it is now wrong. Had science operated by majority consensus, we would be still stuck in the Middle Ages, and Einstein would have ended as he started, a patent clerk with fruitless side hobbies.

People who are employees for a living can’t and don’t behave opportunistically. Whereas, contractors are exceedingly free; as risk-takers, they fear mostly the law. But employees have a reputation to protect. And they can be fired.

People whose survival depends on qualitative “job assessments” by someone of higher rank in an organization cannot be trusted for critical decisions, even though they are reliable by design, it remains the case that they cannot be trusted in making decisions, hard decisions, anything that entails serious tradeoffs.

In firms it’s great to have some degree of power in your say of the company. It becomes apparent that salespeople are only manageable when they were unprofitable for example, in which case they weren’t wanted. If they were hyper profitable this gives them power to do as they please.

People in a company who actively make the company can be so disruptive that they needed to be kept away from the rest of the employees.

Useful Aphorisms from Skin in the Game:

The market is like a large movie theater with a small door.

What matters isn’t what a person has or doesn’t have; it is what he or she is afraid of losing.

How much you truly “believe” in something can be manifested only through what you are willing to risk for it.

You do not create dynamic equality just by raising the level of those at the bottom, but rather by making the rich rotate-or by forcing people to incur the possibility of creating an opening.

The way to make society more equal is by forcing (through skin in the game) the rich to be subjected to the risk of exiting from the 1 percent.

Another lesson from Piketty’s ambitious volume: it was loaded with charts and tables. There is a lesson here: what we learn from professionals in the real world is that data is not necessarily rigor.

Further, people mistake empiricism for a flood of data. Just a little bit of significant data is needed when one is right, particularly when it is disconfirmatory empiricism, or counterexamples: only one data point (a single extreme deviation) is sufficient to show that Black Swans exist.

Traders, when they make profits, have short communications; when they lose they drown you in details, theories, and charts.

For many environments, the relevant data points are those in the extremes; these are rare by definition, and it suffices to focus on those few but big to get an idea of the story. If you want to show that a person has more than, say $10 million, all you need is to show the $50 million in his brokerage account, not, in addition, list every piece of furniture in his house, including the $500 painting in his study and the silver spoons in the pantry.

Two people can be using the same word, meaning different things, yet continue the conversation, which is fine for coffee, but not when making decisions, particularly policy decisions affecting others. But it is easy to trip them, as Socrates did, simply by asking them what they think they mean by what they said-hence philosophy was born as rigor in discourse and disentanglement of mixed-up notions, in precise opposition to the sophist’s promotion of rhetoric.

We have been so much under assault by vendors using “science” to sell products that many people, in their mind, confuse science and scientism.

Science is mainly rigor in the process.

You say something crazy you will be deemed crazy. But if ate a collection of, say, twenty people who set up an academy and say crazy things accepted by the collective, you now have “peer-reviewing” and can start a department in a university.

Academia has a tendency, when unchecked (from lack of skin in the game), to evolve into a ritualistic self-referential publishing game.

We said earlier that without skin in game, survival mechanisms are severely disrupted. This also applies to ideas.

Ideas need to have skin in the game. You know an idea will fail if it is not useful, and can be therefore vulnerable to the falsification of time (and not that of naive falsificationism, that is, according to some government-printed black-and-white guideline). The longer an idea has been around without being falsified, the longer its future life expectancy.

Don’t be fooled by appearances:

In any type of activity or business divorced from the direct filter of skin in the game, the great majority of people know the jargon, play the part, and are intimate with the cosmetic details, but are clueless about the subject.

Just as the slick fellow in a Ferrari looks richer than the rumpled centimillionaire, scientism looks more scientific than real science.

True intellect should not appear to be intellectual.

Assassins were used for threats:

The most interesting thing about the Assassins is that actual assassination was low on their agenda. They understood non-cheap messaging. They preferred to own their enemies. And the only enemy you cannot manipulate is a dead one.

The Straw Man and mis-representing others:

“Give me a few lines written by any man and I will find enough to get him hung” goes the saying attributed to Richelieu, Voltaire, Talleyrand

The great Karl Popper often started a discussion with an unerring representation of his opponent’s positions, often exhaustive, as if he were marketing them as his own ideas, before proceeding to systematically dismantle them.

The Merchandising of Virtue:

It is much more immoral to claim virtue without fully living with its direct consequences.

To take stock: a situation is deemed non-ergodic when observed past probabilities do not apply to future processes. There is a “stop” somewhere, an absorbing barrier that prevents people with skin in the game from emerging from it-and to which the system will invariably tend.

Let us call these situations “ruin,” as there is no reversibility away from the condition. The central problem is that if there is a possibility of ruin, cost-benefit analyses are no longer possible.

Smoking a single cigarette is extremely benign, so a cost benefit analysis would deem it irrational to give up so much pleasure for so little risk! But it is the act of smoking that kills, at a certain number of packs per year, or tens of thousand of cigarettes-in other words, repeated serial exposure.