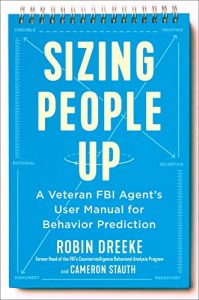 What you will learn from reading Sizing People Up:

– The 6 Signs of Trustworthiness in an individual.

– Some hard truths about predicting others behaviours.

– Why love and fear are linked.

Sizing People Up book summary is a fantastic book written by Robin Dreeke who was head of the FBI’s behavioural analysts division. In this book summary you will learn his 6 step system for identifying and establishing trust with anyone.

Do you actually know anyone well?

I thought I knew these people, but I realized that I knew only what they wanted me to know, due to their own modesty, secrecy, shame, subterfuge, or simple privacy. I was almost equally ignorant of their many virtues, including the raw physical courage of John and Lenny.

Even good people feel the need to hide things, because nobody’s perfect and everybody’s vulnerable. A high percentage of people break rules and lie when they’re desperate: for something they want or something they fear.

Decent, moral people also shade the truth, because each of us wants to be loved, and sometimes we’re afraid that our true selves aren’t worthy of it.

Robin Dreekes’ system works because it cuts to the core of human behaviour and rests primarily upon a single fundamental truth: The one thing that you can almost always predict people to do is to act in their own best interests.

So to determine how people will act, you simply need to learn what they think is in their own best interests, and use that knowledge to predict their behaviour.

Trust, is not a matter of morality. Trust is a predictability.

Predictability comes first. Trust follows. If you can’t reasonably predict what someone will do, you usually can’t trust them.

The first step in putting this principle of prediction into action is to find out what people think is in their own best interests. Most people will be happy to tell you. Why wouldn’t they? It’s usually the best way for them to get what they want. So what somebody tells you, obviously, is usually the best tell there is.

Reliability is a dealbreaker. Don’t hesitate to insist on evidence. Doveryai no Proveryai: Trust, but verify.

The Hard Truths about Predicting Behaviour:

Almost everyone’s behaviour is highly variable, depending upon a person’s degree of desperation, their degree of temptation, and the degree of punishment that they will face if they violate trust or other rules of conduct.

When people have immunity from consequences—due to wealth, power, or status—it tends to have a strong negative effect on their behaviour.

One of the most common reasons people fail to behave in a predictable way is not because they don’t want to, but because they’re unable to, no matter how hard they try.

When people believe that they will have only a short relationship with you, it’s harder to predict what they’ll do. Duration creates a much more compelling climate for reward—or punishment.

Your own perception of someone’s situation does not make it easier to predict what they’ll do. To accurately size them up, you’ve got to go with their perceptions.

Some of the points I made were even critical of my inclusion. But why not? Genuine, self-critical honesty is a great way to help people respect and admire you. It’s the ultimate in transparency, and when you’re transparent about your own shortcomings or question your own strategies, other people don’t have to—which often results in them making your case for you. It’s scary the first few times you do it, but it works wonders.

Use someones past to relax them:

I’ve also found that, as a rule, the further people go back in their lives, the more they lower their shields, presumably because of some primal instinct.

Then I asked him another open-ended question, making it sound as spontaneous as possible. “What was your favorite childhood holiday or tradition?”

The single most potent key to being liked: It’s not how you make people feel about you. It’s how you make them feel about themselves. When somebody makes you feel intelligent, understood, important, or powerful, in a sincere way, how could you possibly not like them?

The System for Sizing People up:

Does this person believe they will benefit from your success?

The reality is, very few people are looking to hurt you. They’re just trying to take care of themselves and their families—as you are—so it’s against your best interests to judge them for that. If you do, you’ll ruin any future chance for mutual vesting, because people can smell a judgmental attitude a mile away.

Does this person think they will have a long relationship with you?

Short relationships invite exploitation. When someone thinks their relationship with you will soon be over, they won’t see much opportunity in it. They’ll face only a short period of enduring the consequences or sharing the gains. So most of the time, you won’t know what’s next with them.

Ritualize the relationship. Rituals memorialize moments, mark the passage of time, and have the power to expand time. Bring someone their favorite coffee drink every Friday, or send a note on any kind of anniversary. Even just reminiscing works.

Can this person do what they say they will? And will they?

Monitoring for Diligence and Competence:

When I’m exploring people for tells of competence, I look for consistency and congruence: consistency of statements when I ask the same question in a couple of different ways, and congruence among all answers, including those that seem to have nothing to do with work.

The skills, knowledge, and experience that a task requires. Lack of competence—and the lack of ability to quickly become competent—is typically a dealbreaker for predicting success at a task. Competence can generally be accurately measured. Most people are competent in a relatively small number of difficult professional tasks.

The character qualities—such as drive, self-responsibility, and a strong work ethic—that turn competence into action and completion. Virtually anyone, with enough effort, can be diligent. But diligence is harder to measure than competence, and is easier to fake.

Does this person consistently demonstrate patterns of positive behavior?

Actions matter. More than anything else. For good or ill, it’s your actions that define you, much more obviously and accurately than what you say or how you feel.

But somebody’s past patterns of behavior are not a foolproof indicator of how they’ll be in the future. That’s especially true when all you know about them is what they tell you.

Past patterns of honesty and fairness have also been shown to crumble when people believe that they can indulge in their actions anonymously, or remain free from consequences.

A history of honesty is usually considered one of the most valuable indicators of strong character and trustworthiness, but honesty sounds far simpler than it is. Many professional people become adept at telling the truth, but rarely the whole truth.

The same factors that complicate honesty also obscure integrity. Integrity is a fine quality, but it, too, can become twisted to the point that it becomes destructive. People often wield the tool of integrity to attack people they oppose.

Does this person know how to communicate in a positive way? Or do they talk trash?

The single most revealing linguistic method for measuring character is to monitor people’s language for nonjudgmental, validating statements about others.

A person’s language style not only reflects their degree of positive traits, but can also create it, in accord with René Descartes’s philosophy that “we do not describe the world we see; we see the world we describe.” Helpful, positive behavior is contagious, and the best way to spread it is with the words you say.

In less than 150 words, he’d touched on some of the most basic pillars of positive, sane, trustworthy behavior. He sought my thoughts and opinions. That was the whole point of his email. In short notes, people tend to start most of their sentences with “I.” His was all “you.”

The 5 Elements of Dreekes’ code of Conduct:

If other people think you’re an egomaniac, they’ll be put off and you won’t see the best side of them. They’ll be wary, offended, defensive, and often unfriendly.

If people don’t think you approve of them, they’ll pull away and look for people who do.

If you do, they’ll judge you back, even if that’s something they don’t usually do. When they start judging you, you’ll stop seeing their kindness, intelligence, and fairness.

If you’re not, people will be tempted to be selfish around you, just to even things out. Nobody wants to be in a one-sided relationship. Try to give people a little more than they expect.

You need to align yourself with people who stick to facts—not feelings, not hearsay—and who know what matters and what doesn’t. Even if what they’re saying is interesting, don’t feed into it. Anybody can tell a good story, but sometimes that’s all it is: a story. Don’t be a sucker for it.

In the age of information, managers consistently get fooled—often to disastrous degrees—because the internet provides numerous mechanisms for deceit and manipulation, in matters of information.

Lead by using peoples own wisdom:

If you can figure out where someone wants to go, and point them in that general direction, your influence can be not only profound, but appreciated. And the appreciation quickly becomes the primary source of your power.

A leaders purpose is to point the way to rational action. Common discovery questions that fit most problems are: What’s the worst-case scenario? Who might not like it? What will they do? What have I tried so far?

Some people would probably think that handing off my contact would undercut my own authority in this important task force, but not me. Leadership is all about sharing power—not consolidating it—and about being a resource for the success of others on your team.

People assign psychological diagnoses to themselves, as if that justifies their troubled behavior. The most common traits that are cited are depression, anxiety, and post-traumatic stress syndrome, all of which are perfectly valid for millions of people. But even though they may explain unpleasant behaviour, they don’t justify it.

The link between Love, Guilt and Fear:

But as I kept studying human behavior, I found that the most accurate and granular definition of guilt is: fear of not being loved. We’re afraid that when people—or deities—discover the bad things we’ve done, their love for us will fade.

We’re less likely, though, to feel remorse or shame when we think that we’ll get away with something. That phenomenon is a form of the previously mentioned power paradox: Powerful people are more likely than vulnerable people to break rules, betray trust, and not worry too much about it.

The most beautiful thing about love—first widely proposed by prominent Duke University psychologist and author Dan Baker, PhD—is that it is mentally and emotionally impossible to be in a state of fear and a state of love at the same time. Love, therefore, is life’s only reliable, eternal, and universal antidote to fear.

I fear fear. It’s the real root of all evil, and it’s commonly embodied by the boring, trivial cuts and jabs of office politics and petty grievances that lie in the realm of aggression that philosopher Hannah Arendt called “the banality of evil.”