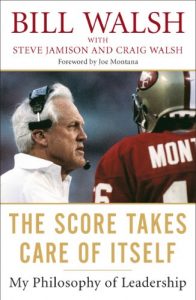 The Score Takes Care of Itself Book Summary – Steve Jamison

– What it takes to be the best in your field.

– Why it’s best to view a team or organisation as a whole rather than separately.

– Why ‘flying by the seat of your pants’ doesn’t work in the real world and what to do about it.

The Score Takes Care of Itself Book Summary

The Score Takes Care of Itself is truly the best book I’ve ever read on what it takes to lead an effective organisation or team. If this book doesn’t inspire you to get out there and do more with your life then I don’t know what will.

The Formula for Success:

Always the same principle was present: There is no guarantee, no ultimate formula for success.

However, a resolute and resourceful leader understands that there are a multitude of means to increase the probability of success. And that’s what It all comes down to, namely, intelligently and relentlessly seeking solutions that will increase your chance of prevailing in a competitive environment. When you do that, the score will take care of itself.

A philosophy is the aggregate of your attitudes toward fundamental matters and is derived from a process of consciously thinking about critical issues and developing rational reasons for holding one particular belief or position rather than another.

Bill Walsh “I directed our focus less to the prize of victory than to the process of improving-obsessing, perhaps, about the quality of our execution and the content of our thinking; that is, our actions and attitude. I knew if I did that, winning would take care of itself, and when it didn’t I would seek ways to raise our Standard of Performance.”

In many ways, it comes down to details. The intense focus on those pertinent details cements the foundation that establishes excellence in performance.

That’s where he started-by raising the self-image of the San Francisco 49ers organization. In football that’s tough to do when you’re not winning games. My tie was a good example. What the heck did it have to do with a Super Bowl? Bill saw the connection. It was one of the tiny things-thousands of them-that he put in place that were part of eventually winning.

Everyone is an extension of each other:

This concept applied beyond the team itself. Players had a connection to-and were an extension of-the coaching staff, trainers, team doctors nutritionists, maintenance crew, and, yes, the people who answered the phones. Everybody was connected, each of us an extension of the others, each of us with ownership in our organisation.

The leader’s job is to facilitate a battlefield-like sense of camaraderie among his or her personnel, an environment for people to find a way to bond together, to care about one another and the work they do, to feel the connection and extension so necessary for great results. Ultimately, it’s the strongest bond of all, even stronger than money.

Of course, between the ups and downs, the good times and bad, there are ongoing challenges to keep everyone firing on all cylinders at all times. Not to get too clever, but “consistent effort is a consistent challenge.”

There’s an ebb and flow, an up and down, in every significant endeavor at every level. I cut through that ebb and flow with the Standard of Performance.

Opportunity Is in the Eye of the Beholder:

Ask yourself: “What assets do we have right now that we’re not taking advantage of?”

Look to Create your own path:

Success doesn’t care which road take to get to its you doorstep.

The traditionalists-rigid and resistant in their thinking-who sneered at the new passing system I was creating were soon trying to figure out why it was beating them and how to copy it.

Don’t fly by the seat of your pants:

Hearing someone described as being able to “fly by the seat of his pants” always suggests to me a leader who hasn’t prepared properly and whose pants may soon fall down.

Bill Walsh: “But again, I had no plan. I was flying by the seat of my pants; we lost. “Never again,” I vowed, “will that happen to me.” That’s when I got serious about scripting; never again would I walk into the future unprepared for foul weather.”

The motto of the Boy Scouts, “Be Prepared,” became Bill’s modus operandi, and to be prepared he had to factor in every contingency: good weather, bad weather, and everything in between. He kept asking and answering this question: “What do I do if… ?”

It’s the same for you, of course: “What do you do if…?” Most leaders take this no deeper than the first level of inquiry. You must envision the future deeply and in detail-creatively-so that the unforeseeable becomes foreseeable. Then you write your script for the foreseeable.

Bill – “I learned through years of coaching that far-reaching contingency planning gave me a tremendous advantage against the competition because I was no different from anyone else; it was almost impossible for me to make quick and correct decisions in the extreme emotional and mental upheaval that accompanied many situations during a game. I defy you to think as well-as clearly-under great stress as you do in normal circumstances. I don’t care how smart or quick-witted you are, what your training or intellect is; under extreme stress you’re not as good. Unless, that is, you’ve planned and thought through the steps you’re going to take in all situations-your contingency plans.”

Scripting and strategising are simply two different words for fair- and foul-weather leadership.

Leadership requires poise under pressure. An organization that witnesses its leader at loose ends when troubles arise will look elsewhere for strength and direction. Knowing in advance what I would do in various situations-for example, scripting a game-was insurance that I could stay poised when it counted.

Of course, it’s an easy trap to fall into, because the trivialities I noted are typical of what a desperate leader can grab onto and control when everything seems out of control. It creates a false and fatal sense of accomplishment, a trap with serious consequences because it keeps you from addressing the key thoughts and solutions, the tough decisions that are at the core of accomplishing a very difficult task; that is, the task of turning things around.

“What he did and the way in which he did it offers a great model that is applicable in any setting. Joe Montana is one of the best examples I have ever seen that proved you don’t need to shout, stomp, or strut to be a  leader-just do the job and treat people right. Isn’t that an essential ingredient in getting people to trust and follow you?”

Don’t believe the critics or the fans:

Nevertheless, it’s easy to get caught up in or enamored of lofty titles, praise, and flattery as you subconsciously attempt to become the character others have created out of who you are.

That character isn’t you, but it’s an addictive attraction if the plaques, awards, and commendations start rolling in. Believing your own press clippings-good or bad-is self-defeating. You are allowing others, oftentimes uninformed others, to tell you who you are.

If you care about how you’re perceived by others, including the public, it’s good to remember the following: Criticism-both deserved and undeserved-is part of the territory when you’re the one calling the shots.

Ignore the undeserved; learn from the deserved; lick your wounds and move on.

Sometimes you can’t have the last word.

Set the standards and make them clear:

People are most comfortable with how they are being treated when their duties are laid out in specific detail and their performance can be gauged by specific metrics. The key is to document-clarify-those expectations.

Employees can thrive in an environment where they know exactly what is expected of them-even when those expectations are very high.

When it comes to telling people what you expect from them, don’t be subtle, don’t be coy, don’t be vague. What is your version of, “Gentlemen, this is a football”?

Quality collaboration is only possible in the presence of quality communication; that is, the free-flowing and robust exchange of information, ideas, and opinions. And “having big ears”-the skill of being a great listeneris the first law of good communication. (The second law is “When you’re not listening, ask good questions.”)

Innovation that works is based on solid integral logic and applied performance. Calculated risks are part of what you do, but the idea that something completely crazy will work just because it’s completely crazy is completely crazy. It fails dramatically more often than it succeeds, but when it does succeed you’re tempted to do it again, and that’s when you get caught.

Here’s my point. Occasionally, when striving to go beyond conventional results, you must go beyond the conventional and against popular opinion. This means trusting your own judgment enough to be resourceful, innovative, and imaginative. It means resisting the herd mentality.

“It’s a maxim that one enemy can do more damage than the good of a hundred friends. I believe it’s true and worth remembering the next time you get upset with someone and mutter, “I’ll fix that so-and-so.” While you’re getting even, they’re getting ahead.”

You must be astute enough to avoid becoming the loser in such situations. By being sensitive to the inherent hazards of a hostile relationship, you can give yourself a chance to win the person over to having at least a neutral association with you.