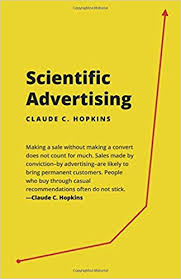 What you will learn from reading Scientific Advertising:

– Why most advertising is wasted and how to avoid being wasteful.

– Why being specific is important when making a proposition.

– How to make your advertising and marketing more effective by following simple principles.

Scientific Advertising Book Summary is a distillation of Claude Hopkins ethos towards advertising and sales. Some of his key ideas include:

Focus on desire and results.

If you’re interested in advertising and copy, check out the Copywriting Secrets book summary and Predatory Thinking book summary.

Begin with desire. What is the person on the other end interested in:

The only readers we get are people whom our subject interests. No one reads ads for amusements, long or short. Consider them as prospects standing before you, seeking information. Give them enough to get action.

The advertising man studies the consumer. He tries to place himself in the position of the buyer. His success largely depends on doing that to the exclusion of everything else.

He pictures the customer’s side of his service until the natural result is to buy.

The purpose of a headline:

The purpose of a headline is to pick out people you can interest. You wish to talk to someone in a crowd. So the first thing you say is, “Hey there, Bill Jones” to get the right person’s attention.

So it is in an advertisement. What you have will interest certain people only, and for certain reasons. You care only for those people. Then create a headline which will hail those people only.

Don’t be naive, people don’t care about what you say unless you make them care.

Always bear these facts in mind. People are hurried. The average person worth cultivating has too much to read. They skip three-fourths of the reading matter which they pay to get. They are not going to read your business talk unless you make it worthwhile and let the headline show it.

So we compare headlines until we know what sort of appeal pays best.

On a soap, for instance, the headline “Keep Clean” might attract a very small percentage. It is too commonplace. – Appeal to goal people are trying to achieve, remove objections or anxieties if possible.

Don’t address the general population, address those you hope to interest:

You are presenting an ad to millions. Among them is a percentage, small or large, whom you hope to interest. Go after that percentage and try to strike the chord that responds.

Don’t think that those millions will read your ads to find out if your product interests. They will decide at a glance—by your headline or your pictures. Address the people you seek, and them only.

We learn, for instance, that curiosity is one of the strongest human incentives. We employ it whenever we can.

People use price to determine somethings worth:

We learn that people judge largely by price. They are not experts. In the British National Gallery is a painting which is announced in a catalog to have cost $750,000. Most people at first pass it by at a glance.

The Power of Sampling in direct marketing:

Many have advertised, “Try it for a week. If you don’t like it we’ll return your money.” Then someone conceived the idea of sending goods without any money down, and saying, “Pay in a week if you like them.” That proved many times more impressive.

Nearly all men, it was found, filled out that request and supplied the information. When a man knows that something belongs to him—something with his name on it—he will make an effort to get it, even though the thing is a trifle.

So with sampling. Hand an unwanted product to a housewife and she pays it slight respect. She is no mood to see its virtues. But get her to ask for a sample after reading your story, and she is in a very different position. She knows your claims. She is interested in them, else she would not act. And she expects to find the qualities you told.

Platitudes and generalities roll off the human understanding like water from a duck. They leave no impression whatever. To say, “Best in the world,” “Lowest price in existence,” etc. is at best simply claiming the expected.

However, a man who makes a specific claim is either telling the truth or a lie.

So a definite statement is usually accepted. Actual figures are not generally discounted. Specific facts, when stated, have their full weight and effect.

“Used the world over” is a very elastic claim. Then one advertiser said, “Used by the people of 52 nations,” and many others followed.

Gradually they accumulate a list of claims important enough to use. All those claims appear in every ad thereafter.

Use subliminal messaging through imagery:

Not only in picturing the collar or the clothes, but in picturing men whom others envy, in surroundings which others covet. The pictures subtly suggest that these articles of apparel will aid men to those desired positions.

But great successes have been made by going to people already educated and satisfying their created wants.

It is a very shrewd thing to watch the development of a popular trend, the creation of new desires. Then at the right time offer to satisfy those desires.

Prevention is not a popular subject, however much it should be. People will do much to cure trouble, but people in general will do little to prevent it. This has been proved my many disappointments.

Be careful not to taint your product:

The product itself should be its own best salesman. Not the product alone, but the product plus a mental impression, and atmosphere, which you place around it.

Be Unique where possible:

But doing admirable things in a different way gives one a great advantage. So with salesmen, in person or in print.

One man appears rugged and honest in a line where rugged honesty counts. One may be a good fellow where choice is a matter of favor. In other lines the man stands out by impressing himself as an authority

You need to be consistent, because that is trust-worthy:

People do not know us by name alone, but by looks and mannerisms. Appearing different every time we meet never builds up confidence.

If you abhor knockers, always appear a good fellow.  Show a bright side, the happy and attractive side, not the dark and uninviting side of things. Show beauty, not homeliness; health, not sickness. Don’t show the wrinkles you propose to remove, but the face as it will appear. Your customers know all about wrinkles.

Picture envied people, not the envious. Tell people what to do, not what to avoid.

You act on your desires, something you want or want to know:

The ones you act on or the ones you keep have a headline which attracted your interest. At a glance they offer something that you want, something you may wish to know.

Remember, the experience is generated by knowing the price paid (the expectation):

Experience generally shows that a two-cent letter gets no more attention than a one-cent letter. Fine stationery no more than poor stationery. The whole appeal lies in the matter.

Get a decision then and there:

But the principles are universal. Strike while the iron is hot. Get a decision then. Have it followed by prompt action when you can.

People who name their product after themselves have skin in the game:

When a product must be called by a common name, the best auxiliary name is a man’s name. It is much better than a coined name, for it shows that some man is proud of his creation.

People look to re-affirm their made decisions:

David Ogilvy points out that Hopkins was in error here. Ogilvy says: “The fact is that users of a product read its advertisements more than non-users.”

Never ask someone if you should buy a product if they just have. Their view will always be biased towards justification.