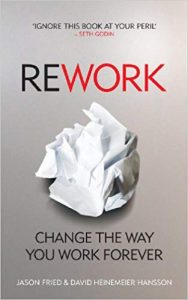 What you will learn from reading ReWork

– Best practices for running a business in the 21st Century.

– How to build better products by simplifying.

– How to hire effectively and set a good culture.

Rework Book Summary explains the new rules of work and how to think about business and the workplace in the 21st Century. If you want to create a company culture that will thrive then this is the book for you. Forget about everything you think a business should be like. This is your new guide to success.

Using real world as an excuse:

The real world isn’t a place, it’s an excuse. It’s a justification for not trying.

In the end, workaholics don’t actually accomplish more than nonworkaholics. They may claim to be perfectionists, but that just means they’re wasting time fixating on inconsequential details instead of moving on to the next task.

Scratch your own itch:

The easiest, most straightforward way to create a great product or service is to make something you want to use.

Define what you don’t do:

But we’re just as proud of what our products don’t do as we are of what they do.

When you don’t know what you believe, everything becomes an argument. Everything is debatable. But when you stand for something, decisions are obvious.

The words on the paper are clearly disconnected from the reality of the experience.

Standing for something isn’t just about writing it down. It’s about believing it and living it.

Remove rather than add:

You need less than you think

You need a commitment strategy, not an exit strategy.

Have less Mass in Business:

Embrace the idea of having less mass. Right now, you’re the smallest, the leanest, and the fastest you’ll ever be.

Avoid these things whenever you can.

Be concise with writing:

Forcing themselves to use simple, clear language helped them deliver maximum impact.

Constraints can be used to force you to keep the product simple.

Don’t talk about “monetization” or being “transparent”; talk about making money and being honest.

Do everything you can to remove layers of abstraction.

How to find the core at the beginning:

The stuff you have to do is where you should begin. Start at the epicenter.

The way to find the epicenter is to ask yourself this question: “If I took this away, would what I’m selling still exist?”

So constantly look for things to remove, simplify, and streamline.

Details are needed further in your Journey:

Detail just doesn’t buy you anything in the early stages.

Details that matter most until after you start building. That’s when you see what needs more attention. You feel what’s missing. And that’s when you need to pay attention, not sooner.

Whenever you can, swap “Let’s think about it” for “Let’s decide on it.” Commit to making decisions. Don’t wait for the perfect solution. Decide and move forward.

The breakthrough came when we asked, “What can we easily do right now that’s good enough?” The answer: Pay affiliates in credit instead of cash. So that’s what we did.

When good enough gets the job done, go for it. It’s way better than wasting resources or, even worse, doing nothing because you can’t afford the complex solution.

Build things around what doesn’t change:

The core of your business should be built around things that won’t change. Things that people are going to want today and ten years from now. Those are the things you should invest in.

It’s tempting for people to obsess over tools instead of what they’re going to do with those tools.

Your tone is in your fingers.

Let’s say you’re going to schedule a meeting that lasts one hour, and you invite ten people to attend. That’s actually a ten-hour meeting, not a one-hour meeting.

The Love and Attention must go to the Product:

Don’t shy away from the fact that your product or service does less. Highlight it. Be proud of it. Sell it as aggressively as competitors sell their extensive feature lists.

You can’t beat someone who’s making the rules. You need to redefine the rules, not just build something slightly better.

People are surprisingly understanding when you take the time to explain your point of view.

So build an audience. Speak, write, blog, tweet, make videos—whatever. Share information that’s valuable and you’ll slowly but surely build a loyal audience. Then when you need to get the word out, the right people will already be listening.

Don’t be afraid to show your flaws. Imperfections are real and people respond to real.

Everyone’s got to be producing. No one can be above the work.

People can do something for ages and still not be good:

The comparison between one year of experience and one with six years. The real difference comes from the individual’s dedication, personality, and intelligence.

Hire them for a miniproject, even if it’s for just twenty or forty hours. You’ll see how they make decisions. You’ll see if you get along. You’ll see what kind of questions they ask. You’ll get to judge them by their actions instead of just their words.

The more people you have between your customers’ words and the people doing the work, the more likely it is that the message will get lost or distorted along the way.

People often respond before they give a change a fair chance.

It’s not a problem until it’s a real problem.

Rockstar environments develop out of trust, autonomy, and responsibility. They’re a result of giving people the privacy, workspace, and tools they deserve.

The Truth about Policies:

Policies are organizational scar tissue. They are codified overreactions to situations that are unlikely to happen again. They are collective punishment for the misdeeds of an individual.