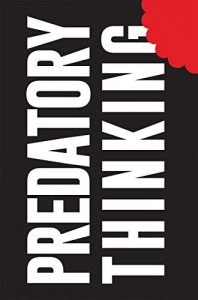 What you will learn from reading Predatory Thinking:

– Why every problem is a opportunity to be creative.

– The relationship between creativity and novelty.

– How imagination can be the biggest source of our fear.

The curse of knowledge:

We think what we know is all there is to know. So we interpret everything according to what we know.

Until we know something, it doesn’t exist as a possibility. Once we know it, we can’t believe everyone doesn’t know it. We can’t assume everyone knows what we know.

Every problem is an opportunity to get creative:

An advertising problem always involves the question, how do we get someone to do (or think) what we want?

So the simple equation is always “What’s in it for them?”

A simple lie is often more powerful than a complicated truth. At least when it comes to mass communication. It didn’t matter that it wasn’t true.

But this guy doesn’t just talk it, he walks it. He invalidated all the competition for a much bigger job, without even a pitch. And he’s got a client who’s doing his word-of-mouth advertising for him.

All by turning that telescope around and looking at it from the other end. The people’s end. Instead of the advertising agency’s end.

Because advertising is just one of many factors involved in the process.

Factors like distribution: do they sell it near me?

Which factors are overlooked?

What constraints might they be operating under? Money? Family? Social?

We’re afraid of asking for what we want and criticism:

We’re terrified of rejection. We’re so frightened of rejection we never ask. So we never get. We’re guaranteed failure, but that’s better than rejection. Because at least no one knows what we wanted.

Criticism is often more useful than praise. And we define ourselves by how open we are to learning and growing. Lazy people don’t want to grow. They just want to be told what they’re doing is right.

Picasso said, ‘Taste is the enemy of creativity.’ By this he means taste is something we can all see and agree on. It obeys the standards we recognize. So we’re comfortable with it.

The truly creative understand the value of embracing charlatanism. It means going beyond the fear of other people’s opinions. So if you want to outrage people you can’t expect their approval. They won’t like it. But, then again, isn’t that the whole point?

Helmut Krone said, ‘If you can look at something and say, “I like it”, then it isn’t new.’

What was difficult for Sheena Iyengar, was the realization that clusters take precedence over brands. People don’t choose a brand first, then see what the product is. They create clusters first, and then brand preference may make a difference

History is a procession of ‘experts’ getting it wrong:

People only listen to experts because it saves them having to take responsibility when things go wrong. They’ve got a ready-made excuse.

Ultimately, we can’t evade responsibility. We choose who to listen to. If we listen to the wrong research, choose the wrong strategy, pick the wrong team, we’re responsible for the outcome.

My instinctive reaction was, ‘No way!’ But I find continued ignorance lies in reacting. And knowledge lies in experimenting.

They are behaving like Jack Dee before he got successful. They are looking for someone to tell them what to do to be liked. They’ll just end up making themselves the same as everyone else.

What works is being different. Don’t try to be liked. Find out how you’re different. Then be that. That’s where the power is.

Say something and mean it:

Far better to think first. If you threaten something, are you really prepared to carry it out?

The father had trained the son to ignore what he said. When he said no, it didn’t mean no. It meant pester me and I’ll give in. So that was their communication.

Someone has to know that when you say something, you mean it. Otherwise don’t say it.

The truth about public opinion:

But, as Jane Juska found out, public opinion doesn’t really exist. We just think it does. Sure, some people were disgusted by what she did. There will always be people like that. But many more were curious and intrigued by what she did.

Technology is a tool:

On the one hand we can spend millions upon millions of dollars doing something that makes us feel reassured, but is totally ineffective. Just because we have a belief that technology must always be superior.

Because technology is a tool. And, like any tool, we can hold it by either the handle or the blade.

Seeing the forest from the trees:

The best strategists do the ‘what’ and let the tacticians do the ‘how’.

Everyone believes their bit is the most important. Each fighting for priority. And no one is standing back and looking at the big picture.

What if? The strange thing is, what I saw wasn’t even advertising. It was an idea to trigger a bigger idea. That’s what I really loved about it.

So instead of selling the client an idea in a way that lets him think he’s got all the time in the world. To fiddle with every tiny unimportant detail. They let him see what’s really important. How will he feel if he sees a competitor has done it? If he’s been beaten to market? He won’t quibble about the serif on the typeface. He won’t worry that the background colour isn’t exactly 100% perfect. He’ll just wish to God he’d done it. What a great lesson.

What we fear is nearly always worse than the reality.

And pictures are finite. Whereas imagination is infinite. Imagination is always as far as you can possibly go, plus one. As Albert Einstein said, ‘Imagination is more important than knowledge.

And that’s really good advice for everyday life. Imagining what your boss thinks of you, worrying what the client’s going to say, fretting over all the problems, all the things that might go wrong. All of this can stop us doing great and exciting things.

As Rory Sutherland said, ‘It’s the job of advertising to make the new familiar, and the familiar new.’ And for that you need imagination. Just remember, imagination makes a great servant and a lousy master.

I think we’re all guilty of that. We spend all our time interpreting the world, instead of just listening.

Other people are lazy and there was no excuse for laziness. Then one day my colleague Paul Bainsfair said to me, ‘Dave, have you ever thought, maybe it isn’t that people don’t want to do what you want. Maybe it’s that they can’t do what you want?’ I’d never thought of that.

Pull-thinking rather than push-thinking. Instead of constantly nagging people to use your product, it shows them something they’d love to do. Something that needn’t even involve mentioning your product. Something fun. And incidentally, without even mentioning it, you’ve created a need for more sales of your product.

We see things as we are:

We all do that every day. In every interaction. Create a reality. Misinterpret it. Then reinforce it.

As the author Anaïs Nin said, ‘We see things not as they are, but as we are.