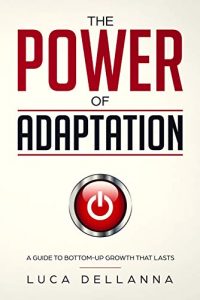 What you will learn from reading The Power of Adaptation:

– Why harm is actually good for us and how we can create more ‘good harm’ in our lives.

– How to get better at accepting feedback and improving yourself.

– How to make yourself and your life more ‘anti-fragile’.

The Power of Adaptation Book Summary:

The power of adaptation is a fantastic book on the role harm plays in human progress and improvement. Luca Dellanna takes concepts discussed in Nicholas Taleb‘s Incerto and makes the more accessible. This book is essential reading for anyone who’s into personal growth. The concept of lagging and lead measures is a fantastic tool in achieving all your goals.

Humans are an ensemble of habits and beliefs:

Our body has a calibration system:

Calibration allows individuals to adapt to their environment without having to change their DNA. Calibration optimises tradeoffs by triggering tissue size changes in response to need.

The Role of Harm in Improvement:

A life stable over the long term does not look stable in the short term. Because you are constantly having to adapt to changes in short term to increase the stability long term.

Humans tend to neglect risks that take longer than an adaptive cycle to materialize, dramatically underestimating their magnitude.

For adaptation to take place, it is not only necessary that the threat harms people, but also that it harms them in a noticeable way.

It is our nature to use admissibility as a proxy for truth. More relevantly, we tend to believe that what did not hurt us nor any of our close ones cannot possibly harm us in the future.

Lagging and Lead Measures in Adaption:

Angela Jiang wrote: “The longer the time between action and result, the more room there is for charlatans”.

The more the time between adaptations is short compared to the time it takes to a threat to materialize, the more it is likely that we adapt to the absence of it (and therefore increase our risk-taking).

Trends measured at the basis of the pyramid of risk are more reliable, both because of a larger sample and because of a lower number of assumptions needed.

Moreover, indicators at the top of the pyramid have a disgraceful property: they measure events that already happened. For this reason, they are called lagging indicators.

Furthermore, perhaps the most important point of all is that success is a lagging indicator whereas its causes, the leading indicators, are habits.

The key lies in choosing not only metrics that stand at the basis of the pyramid, but also in choosing the least gameable metrics possible.

Remember, your current situation is a lagging indicator of yourself.

Thoughts on exposing yourself to harm:

An adaptive entity, including you, your company and our civilizations, should have two priorities:

Whether the harm is good or bad is not an intrinsic property of the source of harm, but rather the result of the type of damage distribution that it inflicts on us.

Controlling the magnitude of the source of harm (for example, choosing the appropriate weight to lift at the gym).

Becoming stronger (so that a given uncontrolled source of harm will inflict less harm to us).

Using decentralisation or “having more than needed” (both of which will be explained afterward) to minimize the chances that a given amount of damage distributes itself in a concentrated way.

It follows that no one can arbitrarily decide what is unfit and has to be replaced – the environment has to be the judge.

You are a multitude:

To perceive those mental patterns not as parts of yourself, but as tools for yourself.

Considering yourself as being a multitude of mental patterns is a good way to “decentralize” yourself, and to ensure that you can safely remove the faulty ones without endangering the ensemble – you.

If you perceive yourself as containing a multitude of patterns, you will have no problem receiving feedback not as personal but towards one of your patterns – and you will, therefore, be able to change the mental pattern without losing your sense of identity.

Time and resources spent solving the sources of problems rather than avoiding them:

The biggest inventors of all time were all tinkerers. Tinkerers do not spend too much time thinking about how they can succeed; they try new approaches, see what works, see what doesn’t, and change accordingly. Then, they try again.

Skin in the Game:

One is said to have “skin in the game” if he is directly affected by the outcome of an event in both a positive and a negative way.

For what concerns the matters at hand here, skin in the game ensures harm when one’s own actions end up being wrong. By guaranteeing harm, it guarantees adaptation.

It generally also ensures the safety of adaptation: if someone has skin in the game, he is less likely to take fatal risks, unless they are necessary.

Humans do not like risky environments, and often introduce barriers to make them safer. However, often such barriers only increase the sense of safety but decrease actual safety, by inviting risk-taking.

In risk management, redundancy is defined as “having more than needed of something”

Where wipeouts are possible, expected payoff is meaningless:

In repeated games where a “game over” is possible, the notion of an expected payoff is meaningless.

The 4 necessary conditions for an entity to be able to express an antifragile behavior:

It must be composed of a population at a lower layer.

Harm must be allowed at that lower layer.

Harm must happen in a distributed fashion.

The surviving members of the population must be able to reproduce.

The 4 actions which can increase the likelihood of an anti-fragile response to a random stressor are:

Ensuring skin in the game.

Ensuring skin in the game: closely tie performance to results. Few things are more damaging than letting your people unaccountable for their actions (both positives and negatives).

Removing exogenous barriers (aka, fences): ensure that nothing stands in the way of feedback.

Creating redundancy: ensure that you have enough resources (employees, stock, bandwidth, money, etc.) and procedures in place to deal with breakdowns

Reducing systemicity: ensure that none of your processes rely on a single person or machine: