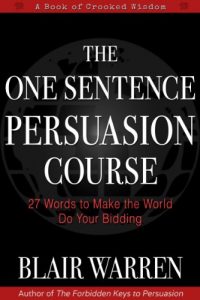 What you will learn from reading The One Sentence Persuasion Course:

– The 5 critical components of persuasion.

– The one sentence that will explain persuasion in its entirety.

– How to apply these principles to persuade.

You will have discovered that the most magical things in life, on and off the stage, are often the result of the correct application of the most basic principles imaginable.

The one sentence persuasion course:

People will do anything for those who encourage their dreams, justify their failures, allay their fears, confirm their suspicions, and help them throw rocks at their enemies.

So the 5 critical components of persuasion are:

The one sentence persuasion ideas expanded:

Don’t focus on your own goals in a conversation. You are looking past the person, looking past everything that is most important to them. And you have little hope of ever being able to establish a deep connection with them.

Same idea tends to confirm what many people suspect about getting ahead in today’s world: in some way, some how, things are rigged against the common man.

What makes the use of scapegoating brilliant in these cases is that it is used immediately in their pitches and instantly offers the viewer something of value – a scapegoat for their problems. From here, the viewer is much more open to the rest of their message.

He told me that the number of people he secured as clients increased significantly once he realized that people often not only want their property to look nicer, but don’t want to accept responsibility for it looking poor in the first place.

Every moment of every day, we want to be engaged in something. It often doesn’t matter what it is as long as it can gain and maintain our attention.