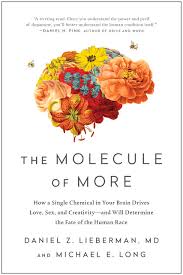 What you will learn from reading The Molecule of More:

– Why and how dopamine allows us to achieve our goals.

– Why dopamine can lead to addictions and cravings.

Our brains are programmed to crave the unexpected and thus to look to the future, where every exciting possibility begins.

That happy error is what launches dopamine into action. It’s not the extra time or the extra money themselves. It’s the thrill of the unexpected good news.

It’s the pleasure of anticipation—the possibility of something unfamiliar and better.

Familiarity – But it wasn’t the coffee and the croissant that changed; it was your expectation. Passion rises when we dream of a world of possibility, and fades when we are confronted by reality.

Acquiring something out of your reach may also take some planning.

The neurotransmitter dopamine is the source of desire (via the desire circuit) and tenacity (via the control circuit); the passion that points the way and the willpower that gets us there.

Characteristic of things in the extrapersonal space: to get them requires effort, time, and in many cases, planning.

Contrast, anything in the peripersonal space can be experienced in the here and now.

Dopamines role in your body:

Dopamine has a very specific job: maximizing resources that will be available to us in the future; the pursuit of better things.

Glamour creates desires that cannot be fulfilled because they are desires for things that exist only in the imagination.

When it comes to love, the loss of passionate romance will always happen eventually, and then comes a choice.

Dopamine has no standard for good, and seeks no finish line

Dopamine isn’t the pleasure molecule, after all. It’s the anticipation molecule.

Most people have heard of the H&Ns. They include serotonin, oxytocin, endorphins

As opposed to the pleasure of anticipation via dopamine, these chemicals give us pleasure from sensation and emotion.

Dissatisfaction with the present state of affairs is an important ingredient in bringing about change, which is what a new relationship is all about.

Just as dopamine is the molecule of obsessive yearning, the chemicals most associated with long-term relationships are oxytocin and vasopressin.

Dopamine responded not to reward, but to reward prediction error: the actual reward minus the expected reward.

There’s a big difference between wanting something and liking it.

In a broad sense, saying something is “important” is another way of saying it’s linked to dopamine.

They’re so attached to dopaminergic stimulation that they flee the present and take refuge in the comfortable world of their own imagination.

The desire circuit is, so to speak, just a salesman

Buyer’s remorse is the failure of the H&N experience to compensate for the loss of dopaminergic arousal.

Alternatively, another way to avoid buyer’s remorse is to purchase something that triggers more dopaminergic expectation,

But the next time you visited the site it wasn’t. There’s no longer any reward prediction error.

Three things that might trigger craving and topple them into relapse: people, places, and things.

People have this mistaken notion that you get high. What you’re really getting is relief from the low.

When an expected reward fails to materialize, the dopamine system shuts down.

When an expected reward fails to materialize, the dopamine firing rate drops to zero, and that feels terrible.

Boosting dopamine can lead to enthusiastic engagement with things that would otherwise be perceived as unimportant.

The dopamine-boosting effect is also evident when marijuana smokers get lost in their own thoughts, floating aimlessly through imaginary worlds of their own creation.

Addiction arises from the chemical cultivation of desire.

When there is not enough dopamine in this circuit, people become stiff and shaky, and they move slowly.

Today, pornographic pictures and videos can be had in seconds and in complete privacy. There are no barriers of embarrassment or shame.

The surge of dopamine feels good, but it’s different from a surge of H&N pleasure, which is a surge of satisfaction. And that difference is key: the dopamine surge triggered by winning leaves us wanting more.

Nothing is ever enough for dopamine. It is the pursuit that matters, and the victory, but there is no finish line, and never will be. Winning, like drugs, can be addictive.

No one likes to lose, but it’s ten times as bad after you win. There was an anecdote in the book where someone was nominated for best doctor. Which leads to anxieties the next year of “will I be nominated again?”

Control dopamine takes the excitement and motivation provided by desire dopamine, evaluates options, selects tools, and plots a strategy to get what it wants.

The ability to put forth effort is dopaminergic. We need to believe we can succeed before we are able to succeed.

Dopamine doesn’t care how something is obtained. It just wants to get what it wants.

Dopamine wants more, and it doesn’t care how it gets it. Moral or immoral, dominant or submissive, it’s all the same to dopamine, as long as it leads to a better future.

Dopamine pursues more, not morality; to dopamine, force and fraud are nothing more than tools.

One of the jobs of the control circuit is to keep the desire circuit in check; hence the impulse control problem associated with ADHD. When control dopamine is weak, people go after things they want with little thought about the long-term consequences.

Dopamine doesn’t come equipped with a conscience. Rather, it is a source of cunning fed by desire. When it’s revved up, it suppresses feelings of guilt, which is an H&N emotion.

Violence is sometimes the result of dysfunction or pathology. But most of the time, violence is a choice—a coercive and calculated way to get the thing you want.

Think of dopaminergic calculation and instinctive response as opposite ends of a seesaw: when one is high, the other is low.

Emotion is almost always a liability that interferes with calculated action. In fact, a common strategy of domination is to stimulate emotional reactions in one’s adversary to interfere with his ability to execute his plans.

Alternatively, someone with a highly active control circuit might be cold and calculating, ruthless and devoid of emotion.

When bold action is required in the midst of chaos, the one who can stay calm, take stock of available resources, and quickly develop a plan of action is the one who will pull through.

Salience refers to the degree to which things are important, prominent, or conspicuous. One kind of salience is the quality of being unusual. For example, a clown walking down the street would be more salient—more out of place—than a man in a business suit. Another kind of salience is value. A briefcase with $10,000 in it is more salient than a wallet with $20. Different things are salient to different people.

Over time things become hidden from out attention. It’s not that a thing starts out hidden, it’s that we make it hidden because it’s not important to us. We inhibit our ability to notice things that are unimportant so we don’t have to waste our attention on them.

In schizophrenia the brain short-circuits, attaching salience to ordinary things that ought to be familiar and therefore ignored. Another name for this is low latent inhibition.

Author and journalist Adam Hochschild described it this way: “When I’m in a country radically different from my own, I notice much more. It is as if I’ve taken a mind-altering drug that allows me to see things I would normally miss. I feel much more alive.”

The new environment becomes familiar, we adjust, and eventually master it. We separate out the things that will affect us from those that won’t, and latent inhibition returns, making us comfortable and confident in our new surroundings. We can once again separate the essential from the nonessential.

But what if the brain is unable to make this adjustment? What if the most familiar place feels like an alien environment? This problem is not confined to schizophrenia.

Models of the world:

Models are imaginary representations of the world that we build in order to better understand it. In some ways model building is like latent inhibition. Models contain only the elements of the environment that the model builder believes are essential.

Other details are discarded. That makes the world easier to comprehend and, later, to imagine a variety of ways it might be manipulated for maximum benefit. Model building isn’t something we’re aware of. The brain builds models automatically as we go about our day, and updates them as we learn new things.

Models not only simplify our conception of the world; they also allow us to abstract, to take specific experiences and use them to craft broad, general rules.

Using imagination, we project ourselves into various possible futures, mentally experience them, then decide how we’re going to get the most out of what we see—how we’re going to maximize our resources, whether it’s a roomy seat, a cheap ticket, or a fast ride.

Mental time travel is a powerful tool of the dopamine system. It allows us to experience a possible, though presently unreal, future as if we were there.

Mental time travel is in constant use because it’s the mechanism for making every conscious choice in life. To the brain, each deliberate choice about the future is a matter for the dopamine system and the models it has created, whether you are deciding what to order at Burger King or the president is deciding whether to start a war. Mental time travel is responsible for every “next step” in our lives.

Analogies represent a very dopaminergic way of thinking about the world. Here’s an example: light can sometimes act like individual bullets being fired from a gun, and at other times like ripples traveling across a pond. An analogy pulls out the abstract, unseen essence of a concept, and matches it with a similar essence of an apparently unrelated concept.

Pairing a brand-new idea with an old familiar one makes the new idea easier to understand.

Intelligence has been defined in many different ways. Most experts agree that an IQ test is not a measure of general intelligence. It more specifically measures the ability to make generalizations from incomplete data and to figure out new information using abstract rules.