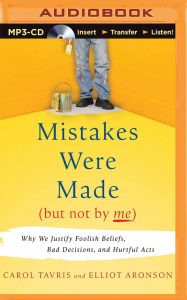 Mistakes were made (but not by me) Book Summary – Carol Tavris

What you will learn from reading Mistakes Were Made:

– Why our memories are inaccurate and what this means.

– How to improve your relationship by understanding implicit theories.

– Why separating your behaviour from your identity will give you less anxiety.

I will look at any additional evidence to confirm the opinion to which I have already come. – Lord Molson, twentieth-century British politician

Most people, when directly confronted by evidence that they are wrong, do not change their point of view or plan of action but justify it even more tenaciously. Aggression begets self-justification, which begets more aggression.

The heart of dissonance is deeply ironic: the mind wants to protect itself from the pain of dissonance with the balm of self-justification, but the soul wants to confess.

If you violate your own values, you’ll feel much greater dissonance because, at the end of the day, you have to go on living with yourself. Our convictions about who we are carry us through the day, and we are constantly interpreting the things that happen to us through the filter of those core beliefs. Dissonance reduction, therefore, will protect high self-esteem or low self-esteem, whichever is central to a person’s core self-concept.

When we cross moral lines, we end up justifying behavior that we know is wrong precisely so that we can continue to see ourselves as honest people and not criminals or thieves. Every time you justify a step, you commit yourself further. Over time, as the self-serving distortions of memory kick in and we forget or misremember past events, we may come to believe our own lies, little by little.

‘How do you get an honest man to lose his ethical compass? You get him to take one step at a time, and self-justification will do the rest.’

Training does not increase accuracy; it increases people’s confidence in their accuracy. – Same goes with education. The antidote to this hubris? Science, because at its core it is a form of arrogance control.

Their professional pride makes them see themselves as being above such matters.

Your behavior changes, but, thanks to blind spots and self-justification, your view of your intellectual and professional integrity remains the same.

Besides as a Judge, if you release someone who later commits a serious crime, or even if you free someone who is innocent but who was erroneously imprisoned for a heinous crime such as child molesting, an outraged public may nail you for it. You have plenty of external incentives for denying that you made a mistake, but you have an even greater internal one: You want to think of yourself as an honorable, competent person who would never help convict the wrong guy.

That is why independent commissions must often be empowered to investigate charges of corruption in a department or determine whether to reopen a case. Their members must have no conflicts of interest, no decisions to justify, no cronies to protect, and no dissonance to reduce.

The psychology of irreversible decisions:

People become more certain they are right about something they just did if they can’t undo it. Therefore, when you are about to make a big purchase or an important decision—which car or computer to buy, whether to undergo plastic surgery, or whether to sign up for a costly self-help program—don’t ask someone who has just done it. That person will be highly motivated to convince you that it is the right thing to do. Ask people who have spent twelve years and fifty thousand dollars on a particular therapy.

We confirm beliefs from small evidence:

Not knowing the details of the allegations, we mindlessly accepted the “where there’s smoke, there’s fire” cliché.Impulsively decide we know what happened and then fit the evidence to support our conclusions, ignoring or discounting evidence that contradicts it.

The truth about Memory:

“What we . . . refer to confidently as memory . . . is really a form of storytelling that goes on continually in the mind and often changes with the telling.” —William Maxwell, memoirist and editor

In this way, memory becomes our personal, self-justifying historian.

1. A vivid memory, one full of emotion and detail can be indisputably wrong.

2. Even if you are absolutely sure a memory is accurate it doesn’t mean that it is.

3. Errors in our memory tend to support our current feelings and beliefs.

We use memories to blame others:

Parent blaming is a popular and convenient form of self-justification for why your life didn’t turn out the way you wanted it too. Because, it allows you to live less uncomfortably with your regrets and imperfections.

If your memories of the same people change, becoming positive or negative depending on what is happening in your life now, then it’s all about you, not them.

Memory thus minimises our own responsibility and exaggerates someone elses.

Memories fit into our narratives:

Once we have a narrative, we shape our memories to fit into it.

Remember – If a memory is a central part of your identity, a self-serving distortion is even more likely.

False memories allow people to forgive themselves and justify their mistakes, but sometimes at a high price: an inability to take responsibility for their lives.

By distorting their memories, these people can get what they want by revising what they had, and what they want is to turn their present bleak or merely mundane lives into dazzling victories over adversity. Memories of abuse also help them resolve the dissonance between “I am a smart, capable person” and “My life sure is a mess right now” with an explanation that makes them feel better about themselves and removes responsibility:

Every marriage is a story, and like all stories, it is subject to its participants’ distorted perceptions and memories that preserve the narrative as each side sees it.

From our standpoint, therefore, misunderstandings, conflicts, personality differences, and even angry quarrels are not the assassins of love; self-justification is. The types of self-justification that can erode a marriage, however, reflects a more serious effort to protect not what we did but who we are, and it comes in two versions: “I’m right and you’re wrong” and “Even if I’m wrong, too bad; that’s the way I am.”

In this case, self-justification is blocking each partner from asking: Could I be wrong? Could I be making a mistake? Could I change?

Once people commit themselves to an opinion about “who started this?,” whatever the “this” may be—a family quarrel or an international conflict—they become less able to accept information that is dissonant with their positions. Understanding without vengeance, reparation without retaliation, are possible only if we are willing to stop justifying our own position.

Implicit theories in a relationship:

(These theories are called “implicit” because people are often unaware that they hold them.) Debra’s implicit theory is that Frank is socially awkward and passive; his theory is that Debra is insecure and cannot accept herself or him as they are. The trouble is that once people develop an implicit theory, the confirmation bias kicks in and they stop seeing evidence that doesn’t fit it.

“They each think the other is at fault,” their therapists observed, “and thus they selectively remember parts of their life, focusing on those parts that support their own points of view.”

Implicit theories have powerful consequences because they affect, among other things, how couples argue, and even the very purpose of an argument. If a couple is arguing from the premise that each is a good person who did something wrong but fixable, or who did something blunder-headed because of momentary situational pressures, there is hope of correction and compromise.

Studies have found that being criticised for who you are rather than for what you did evokes a deep sense of shame and helplessness; it makes a person want to hide, disappear. And, remember the one thing that self-justification is designed to protect: our feelings of self-worth, of being loved, of being a good and respected person.

How to be a successful couple:

Successful, stable couples are able to listen to each other’s criticisms, concerns, and suggestions undefensively.

In good marriages, a confrontation, difference of opinion, clashing habits, and even angry quarrels can bring the couple closer, by helping each partner learn something new and by forcing them to examine their assumptions about their abilities or limitations.

“How could such a bad thing have happened to me, a good person?” This is perhaps the most painful dissonance-arousing question that we confront in our lives. It is the reason for the countless books offering spiritual or psychological advice to help victims find closure—and consonance.

When there are sides, each side will justify its own position by claiming that the other side is to blame; each is simply responding to the offense or provocation as any reasonable, moral person would do.

Of all the stories that people construct to justify their lives, loves, and losses, the ones they weave to account for being the instigator or recipient of injustice or harm are the most compelling and have the most far-reaching consequences. The incomprehensibility of the perpetrator’s motives is a central aspect of the victim identity and the victim story.

The search for meaning in suffering:

Albert Camus observed, we are creatures who spend our lives trying to convince ourselves that our existence is not absurd.

“Being assured that it won’t happen again is very important to patients, more so than many caregivers seem to appreciate,” says Lucian Leape, a physician and professor of health policy at the Harvard School of Public Health. “It gives meaning to patients’ suffering.”

Dealing with dissonance – we are conditioned to avoid mistakes:

“It is considered unhealthy in America to remember mistakes, neurotic to think about them, psychotic to dwell upon them” —Lillian Hellman, playwright.

American children believe that making mistakes reflects on their inherent abilities. If they don’t do well, then to resolve the ensuing dissonance (“I’m smart and yet I screwed up”), they simply lose interest in what they are learning or studying (“I could do it if I wanted to, but I don’t want to”). When these kids grow up, they will be the kind of adults who are afraid of making mistakes or taking responsibility for them, because that would be evidence that they are not naturally smart after all.

Anyone who understands dissonance knows why. Shouting “What were you thinking?” will backfire because it means “Boy, are you stupid.”

A torturer illuminates how we might get there: “I tortured,” he says. He does not say “I am a torturer.” In this way he separates his behavior from his identity, and that ability is what ultimately allows people to live with behavior they now condemn.

Something we did can be separated from who we are and who we want to be.

A great nation is like a great man: When he makes a mistake, he realises it. Having realised it, he admits it. Having admitted it, he corrects it. He considers those who point out his faults as his most benevolent teachers.