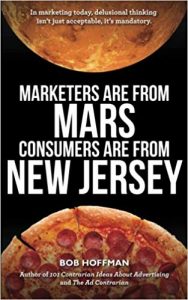 What you will learn from reading Marketers are from Mars:

– Why there is an increasing disconnect between marketing an reality.

– How marketers hide behind jargon and vague concepts.

– The rise of fraud in digital advertising and where you ad spend actually goes.

Marketers are From Mars Book Summary

The definitive guide to marketing in the internet era.

A great resource for illuminating the ineffective marketing practices which continue to hide behind meaningless jargon.

Key Takeaway: one of the lessons about advertising is that practicality consistently outperforms ideology.

You can’t advance your career by speaking plainly and asserting the indisputable — that the reason people buy most products is because they are cheaper, tastier, prettier, work better or are simply more readily available.

Or they are made to believe they have a problem.

How consumers think: Is there parking? Will this fucking thing work? How badly are they going to screw me on the price? Will there be anyone there who knows what the fuck he’s talking about?

How can you align the two?

The Latest (marketing) Fad always begins with “this changes everything”:

Using hysteria – everything has changed, this changes everything… The fact is habits die hard.

The “thought leaders” of the marketing industry are no less guilty of playing the hysteria card to buy themselves status (and consulting gigs) than the media are. They have created an avalanche of exaggerated claims and dire warnings that gain them attention and a nice little profit from the increased viewership/listenership/readership.

The 21st Century brand engagement – No, consumers do not want to have a conversation with your brand, or an “authentic relationship” with it, or co-create with it, or engage with it, or dance with it, or take a shower with it. They want it to work well, taste good, be reasonably priced, and look pretty. End of story.

Consumers want their predicted end goal not to engage with your brand:

Prof. Byron Sharp has said much more articulately in his book, How Brands Grow most of what we call “brand loyalty” is simply habit and convenience.

Useful Advice: Create a great product – Well, I’m afraid Bob has a very old guy opinion. You want customers raving about your brand? Sell them a good fucking product. Steve Jobs had it right. At Apple “brand” was a “dirty word” and Steve “dreaded, hated” the word “branding.”

Interesting Insight – People love bullshit: In trying to analyze the reason for this sudden popularity, I’ve noticed something. People seem to love posts with the word “bullshit” in the title. (One word persuasion, something they believe isn’t quite right)

The ugly truth – The point is this: our brands are very important to us marketers and very unimportant to most consumers. Please read that again.

Richard Feynman, who wonderfully declared that “Science is the belief in the ignorance of experts.”

“But, with digital we have comprehensive targeting ability….”

Targeting has it’s pro’s like everything it’s a tool.

The present obsession with media delivery systems may help our media people locate a certain type of person more easily, but is never going to provide the spark of brilliance on how to motivate this person.

The other exception occurs when people are shopping. Someone actively looking for something is willing to connect.

Here are the 6 stages of digital delusion:

So they’ve renamed it all “content” because it is non-specific — no one knows what the hell it is. And if you don’t know what it is, how can you criticize it?

Content is anything you can upload to the web. In other words, it is pretty much anything. It is a Shakespeare sonnet and a picture of my cat’s ass.

The selfie – and gives it status. You’re not guilty of narcisstic self-indulgence, you’re creating content!

Content is everything, and it’s nothing. It’s an artificial word thrown around by people who know nothing, describing nothing.

By invoking the c-word they are doing what marketing people do best — avoiding the specific and hiding behind jargon.

If you don’t buy into new paradigms – When I left the agency business, people within agencies were essentially forbidden from saying this. If you did, you were labeled a Luddite, a dinosaur, or just plain stupid. You “didn’t get it.” It was a one-way ticket out the door.

Jes’s Insight – Ignorance demands conformity. Because everyone knows they are faking it, they seek comfort in the warmth of consensus.

We have failed to educate our clients on the serious deficiencies related to web advertising: -62% of web traffic is reportedly phony -54% of display ads paid for reportedly never ran -57% of video ads paid for are apparently never seen -Fraud and corruption are massive and reportedly in the billions.

If you don’t have negative punishment how can it be stopped? Thinking financiers.

Self-interest has come into conflict with responsibility. Take a guess what’s winning?

Hindsight bias – khaneman and being stumped.

In fact, there is only one lesson to be learned from the Ice Bucket Challenge: sometimes silly shit catches on.

A whole generation of marketing and advertising people been taught an entire set of principles that is so lacking in a factual basis, and so influenced by anecdotes and fantasies.

Marketers use Gobbleteegook to hide the fact what they say is meaningless:

Most of the time it doesn’t matter. You can get away with not knowing anything by talking in riddles, parables, and indecipherable jargon.

People, being the insecure dimwits they are, assume that since you’re an expert and they’re not, all this hogwash must mean something.

Because if you’re a prototypical marketing professional pretty much everything you say has already been said a thousand times and is going to turn out to be wrong.

Three effective strategies for being dead wrong, but maintaining your “expert” status:

Arguments against the older generation can be wrong

Everyone’s opinions are shaped by their circumstances — digital zealots no less than old traditional ad people. Their criticism implies that the only valid opinions are those of people who are a blank slate.

My opinions may be dead wrong. But the criticism that they are tainted because I started as a “traditional ad guy” is as stupid as criticizing a baseball manager because he started as a player.

Those who can’t argue on merit argue about you:

This is not the basis for serious debate. However, it is the only line of defense for people who can’t argue on merit.

Most of what I read about the advantages that tech-based advertising (i.e., online advertising) has over traditional advertising seem to be opinions masquerading as facts. Is expanded reach actually a benefit?

Jes’s Insight – As always with irrational human behaviour we conform to the majority and the cocksure and we forget to question where there beliefs were founded.

As new technology is adopted by everyone, what starts as a competitive advantage often quickly evolves into just another cost of doing business.

Technology seduces us into thinking we can solve our problems by spending money instead of changing behaviours. Which is about the most damaging trap a business can fall into.

Anyone who’s ever had a parent knows one thing for sure: Old people think young people are idiots.

It’s no coincidence that people in the ad industry tend to be young. All this youth worship is really just narcissism masquerading as business strategy.

Realistic look at demographics – Youth: Even if they wanted a Pontiac (which they didn’t and never would) young people can’t afford new cars, and no lender in his right mind will finance them. Chevy is flirting with frittering away its whole culture on people who don’t buy cars, don’t want cars, and can’t afford cars.

Do not hold up a mirror. Don’t try to show them who they are or tell them what they believe. Older people want to be youthful, but they do not want to be like young people.

Contrary to popular belief – It turns out that the average consumer has a lot more on her mind than conducting online conversations about fabric softener.

Enthusiasm about a brand or convenience – Believers in this ideology assumed that a person’s use of a product was a demonstration of enthusiasm for the brand. Sadly, in the vast majority of cases, it is merely an indication of habit, convenience, or mild satisfaction.

In most cases people will change brands with very little bother if it turns out to be convenient or otherwise beneficial.

The State of Social Media:

There are only two possible explanations. The first is that they are not capable of creating anything that anyone wants to read. I doubt that this is the reason. I think the real reason is the second possibility — they’re full of shit.

“The Future Of Data Driven Infometrics.” Let’s be honest here…none of us really gives a shit about the future of anything except ourselves. – Tell me how this will benefit me.

Issue the following statement: “Sometimes process can be the enemy of progress. We’ve learned something from this and are streamlining everything we do.”

The truth of Social Media:

Maybe ask yourself this question before you create social content: Do you have something worth saying?

CNET reported on a study by research firm Incapsula that found only 38% of traffic on the web is human. – fake traffic is essentially systemic to advertising—it’s part of how the business works.

Every study ever done tells the same story — display ads are overwhelmingly ignored.

Internet is full of phonies:

Euphemistically called “unviewable,” these are ads that “technically” appear but are invisible.

A company in the advertising fraud detection business recently estimated that just one average sized bot-net could be responsible for one billion fraudulent ad impressions every day.

The digital industry is full of sneaky little bastards whose “facts” and “data” usually turn out to be either intentionally misleading, willfully incomplete, or stone cold bullshit.

The research industry, heavily dependent on the digital ad industry for business, is complicit and almost always spins its findings about digital in the most positive light.

Using logic and reason to persuade:

Current Marketers Brains operate like this —- “While I haven’t seen any research that confirms this hypothesis, it seems logical to me and I think it’s probably true.”

Naughty words have a use — they remove any hint of ambiguity.

It assumes the usual bullshit about the web having “changed everything.”

Most depressingly, it shows a remarkable and frightening lack of understanding about what’s going on.

You will think of your agency as “your team.” And, like all teams, they will have a limitless capacity for petty grievances and will go out of their way to undermine each other.

Nobody seems inclined to challenge the wearisome assertions of modern-day wizards, no matter how many times they’ve been wrong.

You can find more of Bob Hoffman’s Work on his blog – http://adcontrarian.blogspot.com/