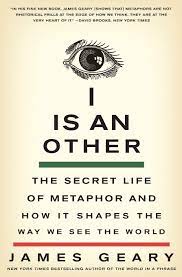 I Is an Other Book Summary – James Geary

What you will learn from reading I Is An Other:

– The ubiquitous role metaphors play in everyday life and their power.

– The taxonomy of deep metaphors.

I Is An Other Book Summary:

I is an Other is another great book on Metaphors. If you’re interested in linguistics and how words can create and frame our reality then this book will definitely hold your interest.

This is a great intro into the role of metaphors and their use in everyday life. If you enjoy this book or are interested in this area in general, I would highly recommend checking out Metaphors we Live By which is our most popular book summary on Metaphors and linguistics.

The etymology of the word “metaphor” itself is derived from the Greek roots meta (over, across, or beyond) and phor (to carry), the literal meaning of metaphor is “to carry across.”

Metaphorical thinking half discovers and half invents the likenesses it describes.

Metaphor systematically disorganises the common sense of things—jumbling together the abstract with the concrete, the physical with the psychological, the like with the unlike—and reorganises it into uncommon combinations.

Whenever we solve a problem, make a discovery, or devise an innovation, the same kind of metaphorical thinking takes place. A metaphor is both detour and destination, a digression that gets to the point. Aristotle identified the mastery of metaphorical thinking as “a sign of genius, since a good metaphor implies an intuitive perception of the similarity in dissimilars.”

Even the word “literal”—derived from the Latin litera, meaning “letter”—is a metaphor. “Literal” means “according to the letter”;

“A man who explains necessarily makes intelligible that which is not known by comparing it with what is known,” Hui Tzu said.

Art of Rhetoric, he suggested that the pleasure of metaphor lies in the hidden link between the source and the target, a connection Vico called the ligamen, from the Latin word ligare, meaning “to bind.” (Ligare is the etymological root of English words such as “ligament,” “ligature,” and even “religion.”)

The ligamen links metaphors with jokes, both of which deliver the same kick of recognition. Both metaphors and jokes involve unexpected twists and violated expectations. There is an initial sense of surprise or consternation, followed by a burst of insight and closure. There is a moment when you “get” a metaphor just as you “get” a joke.

Metaphors thus involve a “co-operative act of comprehension,” according to philosopher Ted Cohen, an act that involves seeking the hidden connection, the ligamen, which makes sense of the metaphor.

The context of a comparison determines which lines we focus on, and those lines in turn demarcate the boundaries of what we see. So the way a question is framed—which alternatives are offered, which words are chosen to describe those alternatives, and which associated commonplaces those alternatives evoke—has a powerful effect on which answers people give.

So, when we read “Man is a wolf,” man is immediately seen through the prism of wolf-associated commonplaces. We zoom in on those aspects of wolves that apply to man—sly, predatory, hungry, vicious—while those aspects that do not apply—fourlegged, furry, litter-bearing, living in the woods—fade into the background. Metaphor is a lens that clarifies and distorts. It focuses our attention on a specific set of associated commonplaces, but in so doing also narrows our view.

The most successful metaphors are the least expected. “Metaphorical force requires a combination of novelty with fitness, of the odd with the obvious,” as art historian Nelson Goodman put it. “The good metaphor satisfies while it startles.”

Applying agency to objects that have none:

To human beings, “agents”—anything to which we attribute human feelings, motives, and motivations—are special, so special, in fact, that attributing agency to stock price movements through agent metaphors can actually affect our financial decisions.

Decades of statistical analysis suggest the random walk metaphor is still the most accurate way to describe price movements in the stock market. Yet people insist on dragging bulls and bears into it.

In Second Nature: Brain Science and Human Knowledge, Edelman states that Brains operate not by logic but by pattern recognition. This process is not precise, as is logic and mathematics. Instead, it trades off specificity and precision, if necessary, to increase its range.

“To understand,” the philosopher Isaiah Berlin observed, “is to perceive patterns.” Metaphor, however, is not the mere detection of patterns; it is the creation of patterns, too. When Robert Frost wrote, A bank is a place where they lend you an umbrella in fair weather and ask for it back when it begins to rain

Ralph Waldo Emerson, an avid amateur etymologist, once said that money was “as beautiful as roses.” In his essay “The Poet,” Emerson described language itself as a kind of etymological artifact, or “fossil poetry”. For though the origin of most of our words is forgotten, each word was at first a stroke of genius, and obtained currency because for the moment it symbolised the world to the first speaker and to the hearer. The etymologist finds the deadest word to have been once a brilliant picture.

Gerald Zaltman of the research and consulting firm Olson Zaltman Associates has spent the past few decades plumbing the depths of this affective pool. He has surfaced with what he calls “deep metaphors

Here is the taxonomy of Zaltman’s deep metaphors:

Balance refers to social and psychological equilibrium, expressed in phrases like “I am centered” and “It feels slightly off.”

Connection involves the sense of belonging (“a team player” or “a loose cannon”).

Container describes psychological or emotional states (“in a good mood” or “out of your mind”).

Control implies mastery of events (“It’s out of my hands” or “We’re on the same page”).

Journey suggests movement toward or away from a goal (“We’re on course” or “We got waylaid”).

Resource references basic necessities such as food, family, friends, and finances (“bread and butter issues” and “My job is my lifeline”).

Transformation encompasses physical or psychological change (“He turned over a new leaf” or “She’s a different person now”).

This synesthetic link between the abstract and the concrete may be the source of more than just metaphor.

Cognitive psychologist Steven Pinker observed in The Stuff of Thought: Human intelligence would be a product of metaphor and combinatorics. Metaphor allows the mind to use a few basic ideas . . . to understand more abstract domains. Combinatorics allows a finite set of simple ideas to give rise to an infinite set of complex ones.

Metaphors are so entertaining because of the pleasure we get from figuring them out, as in the following saying, a brilliantly condensed lesson in the uselessness of the wisdom that comes with age: Experience is a comb that nature gives to bald men.

Once we find that thread, we scurry across it, completing the connection between these utterly unlike things. The originator has already done this high-wire act in his or her own mind. Through the metaphor, we are forced to perform the same feat. And cognitive gymnastics like this are good for us since they boost mood and sharpen mental skills.

These studies do more than just state the obvious (jokes cheer you up) or prove the much less obvious (math cheers you up). What really cheers you up, the researchers concluded, is the effort to resolve the cognitive dissonance inherent in both jokes and math problems.

What jokes and math problems have in common—with each other and with metaphor—is the need to resolve cognitively dissonant elements. The greater the cognitive exertion, the researchers found, the greater the subsequent positive feelings.

A good metaphor is like a good detective story. The solution should not be apparent in advance to maintain the reader’s interest, yet it should seem plausible after the fact to maintain coherence of the story.

As Max Black put it, “It would be more illuminating . . . to say that the metaphor creates the similarity than to say that it formulates some similarity antecedently existing.”

“Experience is a good school,” the German poet Heinrich Heine once quipped. “But the fees are high.”

The Power of Metaphors:

What philosopher Suzanne K. Langer wrote of metaphor is true of analogy, too: “Language, in its literal capacity, is a stiff and conventional medium, unadapted to the expression of genuinely new ideas, which usually have to break in upon the mind through some great and bewildering metaphor.”

Lewis called this type of analogy—the type that compares the unknown with the known—a “master’s metaphor,” or metaphor as teaching tool. Like Langer, Lewis argued that master metaphors are essential to communicate any kind of innovative, original thinking.

The theoretical physicist Richard Feynman was such a lauded lecturer in large part because, like Hui Tzu, he was skilled in finding the right analogies to illustrate his explanations of extremely abstract—and extremely difficult—concepts.

Assuming you do this successfully, Deutsch says, the outcome is, “You don’t understand the resulting theory. It solves the theoretical problems, but you can’t see what it means. You don’t understand how that could be a description of the actual world, or what the world would have to be like for that to be true. Then you think of an analogy.”

“Maybe the Earth is like a rice pudding,” Deutsch says of the analogical reasoning that followed the plate tectonics theory, “hard and brittle on top but pliable and liquid underneath. Sometimes, the surface skin ruptures and pulls apart. The metaphor is useful because it answers the question of how something can be. It makes the theory easier to understand because it is similar to something else.”

In science, metaphor tells you what things are like, not what they are. After analogy, Deutsch says, the final step in the discovery process is “to understand the thing in its own right, not metaphorically. Once you do this, you can dispense with the metaphor and understand the world as it actually is.”

Alexander Graham Bell invented the telephone after studying the operation of the bones inside the human ear. Isambard Kingdom Brunel, engineer of Britain’s Industrial Revolution, realized how to dig tunnels under the Thames for the London Underground by watching a worm burrow into a piece of timber.