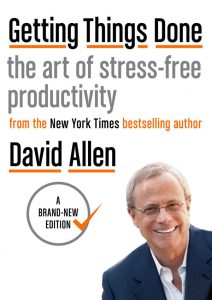 What you will learn from reading Getting Things Done:

– How you cause your own stress by accumulating things to do without defining your next action.

– Why not capturing open loops in your life will create overwhelm.

– How to keep agreements with yourself and do what you say you will do.

“This consistent, unproductive preoccupation with all the things we have to do is the single largest consumer of time and energy.” -Kerry Gleeson

The Getting Things Done Challenge:

Your mind is designed to have ideas, based upon pattern detection, but it isn’t designed to remember much of anything! Because of the way the mind developed, it is brilliant at recognition, but terrible at recall.

Not only this but, organisations are now almost universally in morph mode, with everchanging goals, products, partners, customers, markets, technologies, and owners. These all, by necessity, shake up structures, forms, roles, and accountabilities.

The big secret to efficient creative and productive thinking and action is to put the right things in your focus at the right time.

A signpost of GTD mastery at this stage-and, indeed, life mastery!-is when one recognizes anything that has his or her attention (concerns, worries, problems, issues, tensions) and translates them into achievable outcomes (projects), to be executed with concrete next actions.

Allen considers “work,” in its most universal sense, to mean anything that you want or need to be different than it currently is. Many people make a distinction between “work” and “personal life,” but Allen doesn’t: “To me, weeding the garden or updating my will is just as much “work” as writing this book or coaching a client.”

Here’s how he defines “stuff”: ‘anything you have allowed into your psychological or physical world that doesn’t belong where it is, but for which you haven’t yet determined what, exactly, it means to you, with the desired outcome and the next action step.’

The reason most organising systems haven’t worked for most people is that they haven’t yet transformed all the stuff they’re trying to organise. Stuff must become work in the form of a next action to be useful.

Allen defines ‘Projects‘ as outcomes that will require more than one action step to complete and that you can mark off as finished in the next 12 months. Most people have 10-100 current projects, personally and professionally.

You don’t do Projects:

Many projects seem overwhelming-and are overwhelming because you can’t do a project at all! You can only do an action related to it. Many actions require only a minute or two, in the appropriate context, to move a project forward.

In training and coaching many thousands of people, Allen found that lack of time is not the major issue for them (though they may think it is); the real problem is a lack of clarity and definition about what a project really is, and what associated next-action steps are required.

A good rule of thumb is, If the project is still on your mind, there’s more thinking required.

Clear the deck, create a context, and do some creative project thinking. You’ll then be way ahead of most people.

When is a problem a project? Always. When you assess something as a problem instead of as something to simply be accepted as the way things are, you are assuming there is a potential resolution.

In the 1920s, Lituanian-born graduate student Bluma Zeigarnik sat in a restaurant. While sat there she observed that the waiters had a knack for remembering complex orders. Allowing them to serve the right food to the right tables and to submit checks after the customers had finished their meals.

Zeigarnik also observed that once an order had been completed and paid for, it seemed to disappear from the waiter’s mind. For example, if a customer returned with a question about the meal they’d had the waiters struggled to recall it.

From this, Zeigarnik developed a theory: our mental energy is drawn to incomplete tasks. Once a task is dealt with, we drop it from our minds. Further laboratory studies have confirmed Zeigarnik’s thesis.

David Allen essentially re-dresses this concept calling it open loops. Allen Defines open loops as: “Anything pulling at our attention that doesn’t belong where it is, the way it is.”

For example, in the past few minutes, has your mind wandered off into some area that doesn’t have anything to do with what you’re reading here? Probably. And most likely where your mind went was to some open loop, some incomplete situation that you have an investment in.

The main premise of GTD is to capture and deal with these open loops systematically.

The GTD process is the following:

We (1) capture what has our attention; (2) clarify what each item means and what to do about it; (3) organise the results, which presents the options we (4) reflect on, which we then choose to (5) engage with. 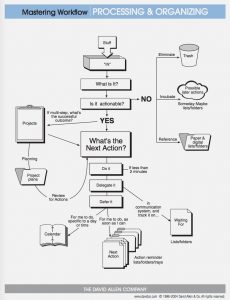 The primary reason for organising is to reduce cognitive load-i.e. to eliminate the need to constantly be thinking, “What do I need to do about this?”

Know your Next Actions:

“I am rather like a mosquito in a nudist camp; I know what I want to do, but I don’t know where to begin.” -Stephen Bayne

The next-action decision is central. That action needs to be the next physical, visible behavior, without exception, on every open loop.

The habit of clarifying the next action on projects, no matter what the situation, is fundamental to you staying in relaxed control.

When a culture adopts “What’s the next action?” as a standard operating query, there’s an automatic increase in energy, productivity, clarity, and focus.

1. Defining purpose and principles – (Why are we doing this?)

5. Identifying next actions – (What’s the next physical action to be done?)

You need clarity in outcomes and purpose otherwise you won’t be working pro-actively towards anything. Just reactively.

The degree to which any of us needs to maintain checklists and external controls is directly related to our unfamiliarity with the area of responsibility.

Don’t break promises to yourself:

Trying to create goals before you have confidence that you can keep your everyday world under control will often undermine your motivation and energy rather than enhance them.

The sense of anxiety and guilt doesn’t come from having too much to do; it’s the automatic result of breaking agreements with yourself.

The negative feelings come from broken agreements, you have three options for dealing with them and eliminating the negative consequences:

We all seem to be starved for a win. It’s great to satisfy that by giving yourself doable tasks you can start and finish easily. Have you ever completed something that wasn’t initially on a list, so you wrote it down and checked it off? Then you know what I mean.