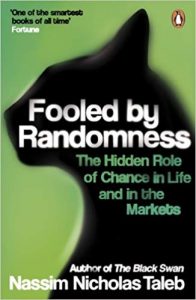 What you will learn from reading Fooled by Randomness:

– Why closely observing performance leads you to distort your view.

– How survivorship bias makes us believe that success is easier than it is.

– How to be more humble and live with the uncertainty of life.

We favour the visible, the embedded, the personal, the narrated, and the tangible; we scorn the abstract.

The use and misuse of science:

By cramming your work full of scientific references you can make another literally intellectual believe that one’s material has the stamp of science.

Let us remember economists are evaluated on how intelligent they sound, not on the scientific measure of their knowledge.

Science lies in the rigor of reason and evidence rather than reference to grandiose concepts such as quantum mechanics.

Taleb: My opinion was that the market was more likely to go up (I would be bullish) but that it was preferable to short it (I would be bearish) because in the event of it going down, it could go down a lot.

We confuse overall performance with minute by minute changes:

The closer you observe your performance, the more pain you may experience due to a greater variability at a higher resolution.

Psychologists recently discovered that people tend to be sensitive to the presence or absence of a given stimulus rather than its magnitude. This means we would rather optimise for the higher number of gains and lower number of losses rather than optimise the total performance (long term performance)

We tend to ignore extreme results labelling them outliers.

Stay in the game:

Everyday you stay in the game, you increase the probability of the desired end result.

If you engaged in russian-roulette style strategy with a low probability of large loss, one that bankrupts you every several years, you are likely to show up as the winner in almost all samples except the year when you are dead.

Karl Popper and the two types of theories:

If someone outperformed the crowd in the past, there is a presumption of his ability to do better in the future. This performance depends on two factors: The randomness content of this profession and the number of monkeys in operation.

The survivorship bias implies that the highest performing realisation will be the most visible this is because the losers do not show up.

Remember, that people tend not to take home a table showing how many times they were right or wrong.

The mistake of ignoring the survivorship bias is chronic even among professionals. As we are trained to take advantage of the information in-front of our eyes not the information we don’t see.

How to deal with the uncertainty:

Make sure the costs of being wrong are limited. Look for stop loss, a predetermined exit point, a protection from the black swan.

The real reason for economic superiority?

You stop when you get a near satisfactory solution.

Be wary of people who look the part:

“Empty suit” someone who looks the part but is nothing more.

People tend to determine a persons ability and credibility in the first judgement which ignores the fact this sample size is so small and can be other causes.

Become devoid of path dependence. Be totally free of past actions. Every day is a clean slate.

The Asymmetry in Organisations:

Judging on process vs judging on results. Lower ranking persons in organisation are judged on both process and results. But top management is paid only on results.

Unless you have confidence in the rulers reliability, if you use a ruler to measure a table you may also be using the table to measure the ruler.

In people terms: It is habitual of most people to hold opinions about other people, situations and ideas. In most of the cases, our opinions speak more about us, rather than the topic itself.

Wittgenstein’s Ruler relates that measurement always provides the same amount of information, regardless of the reliability of the measurement device.

There are three important consequences of this:

Favourite quotes from Fooled by Randomness:

“Probability is not a mere computation of odds on the dice or more complicated variants; it is the acceptance of the lack of certainty in our knowledge and the development of methods for dealing with our ignorance.”

“Mild success can be explainable by skills and labor. Wild success is attributable to variance.”