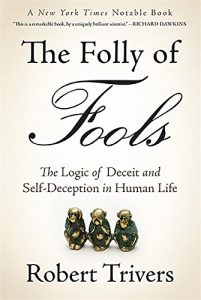 What you will learn from reading The Folly of Fools:

– Why we evolved to deceive ourselves.

– The true cost of self-deception at a societal level.

The Folly of Fools Book Summary:

The folly of fools is all about the role self-deception plays in everyday life.

The hypothesis of this book is that this entire counterintuitive arrangement exists for the benefit of manipulating others. We hide reality from our conscious minds the better to hide it from onlookers. We may or may not store a copy of that information in self, but we certainly act to exclude it from others.

Cognitive load: Lying can be cognitively demanding. You must suppress the truth and construct a falsehood that is plausible on its face and does not contradict anything known by the listener, nor likely to be known.

So the key to defining self-deception is that true information is preferentially excluded from consciousness and, if held at all, is held in varying degrees of unconsciousness. If the mind acts quickly enough, no version of the truth need be stored.

Deception within species is expected in almost all relationships, and deception possesses special powers. It always takes the lead in life, while detection of deception plays catch-up. As has been said regarding rumors, the lie is halfway around the world before the truth puts its boots on.

Every new deception, by definition, starts rare and thereby gains an initial advantage. Only with success will one’s disguise become part of the backdrop against which another novelty can begin rare and flourish.

We use patterns to detect deception, and randomness is the absence of pattern. It is often not appreciated how valuable randomness is as part of a deceptive strategy designed to avoid detection.

Detected deception may lead to social shame, bad reputation, loss of credibility and status, so that there will always be pressure on the deceiver to hide the deception, not only to make it successful but to avoid the larger consequences of detection.

By contrast, the psychological immune system works not by fixing what makes us unhappy but by putting it in context, rationalizing it, minimizing it, and lying about it.

The psychological immune system must be the one that causes us to go out and fix the problem. Guilt motivates us toward reparative altruism, unhappiness toward efforts to improve our lives to diminish the unhappiness, laughter to appreciate the logical absurdities in life, and so on.

We create memories and free will:

We can and do invent completely fictitious memories. As has been said, “My memory is so good I can remember things that never happened.”

Contrary to our imagination, the conscious mind seems to lag behind the unconscious in both action and perception-it is much more observer of action than initiator.

Great Analogy – Regarding one’s personal life, the problem with learning from living is that living is like riding a train while facing backward. That is, we see reality only after it has passed us by.

It is as if there is a “responsibility equation” such that decrease of one portion must necessarily be matched by an increase elsewhere.

The evolution of words and their meaning:

It seems as if we are running from the negative connotations of words.

There is also something that has been aptly called the euphemism treadmill, in which each new euphemism soon becomes tainted by what it refers to so that a new euphemism must be invented to take its place. “Garbage collection” becomes “sanitation work,” which morphs into “environmental services”.

The copilot is even less likely to challenge mistakes of the pilot than vice versa, and especially if the two are unfamiliar with each other. In our case. the pilot is completely unconscious, so he is not challenging anyone. The copilot is actually challenging himself but, getting no encouragement from the pilot, he lapses back into ineptitude.

This is a recurring theme in self-deception and human disasters: overconfidence and its companion, unconsciousness.

The FAA ended up acting like a biased referee, approving relatively inexpensive patches that probably reduced (at least slightly) the chance of another crash but did not deal with the problem directly. As one expert put it, “Until the blood gets deep enough, there is a tendency to ignore a problem or live with it.” – This is another example of the true cost of not dealing with the root cause of a problem.

Why we struggle to change our minds:

There is also an analogy here to the individual. The deeper changes are the more threatening because they are more costly. They require more of our internal anatomy, behaviour, and logic to be changed, which surely requires resources, may be experienced as painful, and comes at a cost.

Absence of self-criticism converts attention from defense to offense.

As a working engineer, might take your safety concern to your boss and get one of two responses. He or she might say, “Tell me more” or “Have you tried such-and-such?”

But if he or she replied, “Well, see what you can do about it” once or twice, you might very well decide, “To hell with it.” These are the kinds of interactions individual on individual (or cell on cell)-that can produce within-unit self-deception.

False historical narratives are lies we tell one another about our past. The usual goals are self-glorification and self-justification.

Herbert Spencer summarized the general effect: “The ultimate effect of shielding men from the effects of their folly is to fill the world with fools”

We expect knowledge to be more deformed when more deformation is advantageous to those in control. Science itself, is based on a series of increasingly sophisticated and remorseless anti-deceit and anti-self-deception mechanisms.

In short, injustice invites self-deception, unconsciousness, and inability to perceive reality, while justice has the opposite effect.

Science asks that, whenever possible, knowledge be built on preexisting knowledge. Key assumptions may already be contradicted (or supported) by preexisting knowledge, and where no such knowledge exists, science suggests the value of producing it. Errors in the foundation-of both buildings and disciplines-are the most costly.

The structure of the natural sciences is as follows. Physics rests on mathematics, chemistry on physics, biology on chemistry, and, in principle, the social sciences on biology.

In physics, we imagine precious little self-deception. What difference does it make for everyday life whether the gravitational effect of the mu meson is positive or negative? None at all. So the field is expected to advance relatively unimpeded by forces of deceit and self-deception-with one exception.

For roughly a century, biologists had the social world analyzed almost upside down. They argued that natural selection favored what was good for the group or the species, when in fact it favors what is good for the individual (measured in survival and reproduction), as Darwin well knew.

To be conscious is to be aware of possibilities, including those arising in a world saturated with deceit and selfdeception.

Individuals able to see through group self-deception (i.e. bet against a bubble) are able to clean up. More generally, betting against over-confidence (and falsely hyped products) is a good strategy. People also indulge in anticipation and regret and are slow to change their opinions-contra utility theory- and these provide new opportunities for exploitation.

Strong people welcome new ideas and make them their own. Weak people run from new ideas, or so it seems, and then are driven into bizarre mind states, such as believing that words have the power to dominate reality, that social constructs such as gender are much stronger than the 300 million years of genetic evolution that went into producing the two sexes-whose facts in any case they remain resolutely ignorant of, the better to develop a thoroughly word-based approach to the subject.

Another example of noticing a pattern of behavior and acting consciously against it concerns displacement activities. It is a fact of human (and monkey) psychology that aggression is easily displaced onto others. It is as if your anger is incited and, looking around for targets, is blocked from the logical one, so it looks for nearby victims, preferably those smaller and less able to retaliate.

Don’t believe your own press:

A famous warning in this genre is “not to believe your own press”. That is, when your work is first discovered there will be a wave of press suggesting particularly that (at one extreme) you are-if not the greatest thing since sliced breadat least the greatest thinker since whomever. Believe this at your own risk.

Passage on showing off:

Trivers – “For this and many other reasons, I regard showing off as one of the most dangerous things you can do. I believe your attention has shifted entirely to persuading others and away from current reality.”