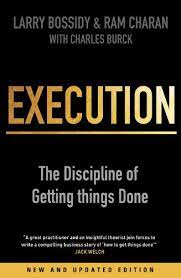 What you will learn from reading Execution:

– The seven essential behaviours of execution.

– The difference between strategy and execution.

– How to structure objectives and projects, hold people accountable and get things done.

Execution book summary is all about how to create a business or culture where everyone gets things done. If you’re a leader or entrepreneur this is a great book to aid you in structuring your enterprise to execute on your ideas and projects. It’s also a great book in personal management and learning how to execute yourself on your own projects and ideas. If this interests you, read on.

The Seven Essential Behaviours of Execution:

There are seven essential behaviours that form the first building block of execution:

To execute well there must be accountability, clear goals, accurate methods to measure performance, and the right rewards for people who perform. But now, more than ever before, leaders need to design flexible operating plans. In the past a company might make one or perhaps two profound changes in its operations each year.

Processes can become empty rituals, almost abstractions. People can do a lot of work but very little of it is useful.

Knowing your people is just as important as knowing your business in these perilous times. Knowing your people obviously requires rigorous evaluation against clear goals and candid and thorough feedback. But it also requires you to become a better listener, seeking peoples’ opinions and ideas even when they may not be as forceful in making their points or arguments as others. Listen to your people and learn who among them is grounded in reality, undeterred by obstacles, and determined to execute the strategy come hell or high water.

It goes without saying that you need to do precise, accurate, and candid appraisals, but be sure you are looking for the qualities that matter amid the current turmoil: energy, courage, honesty, integrity, and perseverance. You need people who can roll with the punches, not people who are whiners and naysayers.

Andy Grove, the retired CEO of Intel, summed it up best for us with the title of his book: Only the Paranoid Survive. Especially in today’s environment, people will see an unrealistically rosy view of the future or will disguise the problems confronting your organisation. It is far more important to maintain your credibility as a leader by being relentlessly realistic rather than trying to gloss over problems.

Realism is the heart of execution, but many organisations are full of people who are trying to avoid or shade reality.

Why? It makes life uncomfortable. People don’t want to open Pandora’s box. They want to hide mistakes, or buy time to figure out a solution rather than admit they don’t have an answer at the moment. They want to avoid confrontations. Nobody wants to be the messenger who gets shot or the troublemaker who challenges the authority of her superiors.

Realism also requires you to have a view of the world outside your business and to be prepared to adapt it to reality and make rational judgments about which threats are fundamental to the survival of your business and  which will cost you more to fight than you can possibly win.

Most companies don’t face reality very well. That’s the basic reason they can’t execute. Much has been written about Jack Welch’s style of management-especially his toughness and bluntness, which some people call ruthlessness. We would argue that the core of his management legacy is that he forced realism into all of GE’s management processes, making it a model of an execution culture.

What is a Doer?

Simply put, a doer is a person who gets things done. Doing is meeting goals. Some goals are legitimately short-term goals that yield short-term results and are properly compensated on a short-term basis. But other goals are long-term and by definition we will not know if we have achieved those goals for some time.

Many leaders place too much emphasis on what some call high-level strategy, on intellectualising and philosophising, and not enough on implementation. People would agree on a project or initiative, and then nothing would come of it.

Here lies the problem with many so-called strategies is that they’re too abstract and shallow, or else they’re really operations plans, not strategies.

Remember, no strategy delivers results unless it’s converted into specific actions. The operations process shows how to build, block by block, an operating plan that will deliver the strategy. Both the strategy and operations plans link with the people process to test the match between organisational capabilities and what is required to execute the operating plan.

When companies fail to deliver on their promises, the most frequent explanation is that the CEO’s strategy was wrong. But the strategy by itself is not often the cause. Strategies most often fail because they aren’t executed well. Things that are supposed to happen don’t happen.

But unless you translate big thoughts into concrete steps for action, they’re pointless. Without execution, the breakthrough thinking breaks down, learning adds no value, people don’t meet their stretch goals, and the revolution stops dead in its tracks. What you get is change for the worse, because failure drains the energy from your organisation. Repeated failure destroys it.

What is Execution in Business?

Execution is a systematic process of rigorously discussing hows and whats, questioning, tenaciously following through, and ensuring accountability. It includes making assumptions about the business environment, assessing the organisation’s capabilities, linking strategy to operations and the people who are going to implement the strategy, synchronising those people and their various disciplines, and linking rewards to outcomes.

After a business review, the leader should create a formal letter summarising the things everyone has agreed to do. It’s just a note, takes five minutes. But it clarifies who’s responsible for what, when the deadlines are and what metrics are important.

These processes are where the things that matter about execution need to be decided. Businesses that execute, as we shall see, prosecute them with rigor, intensity, and depth. Which people will do the job, and how will they be judged and held accountable? What human, technical, production, and financial resources are needed to execute the strategy?  Does the strategy deliver the earnings required for success? Can it be broken down into doable initiatives?

People engaged in the processes argue these questions, search out reality, and reach specific and practical conclusions. Everybody agrees about their responsibilities for getting things done, and everybody commits to those responsibilities.

The problem with Execution:

The real problem is that execution just doesn’t sound very sexy. We always see the results not the effort. It’s the stuff a leader delegates. Do great CEOs and Nobel Prize winners achieve their glory through execution? Well, yes, in fact, and therein lies the grand fallacy.

The common view of intellectual challenge is only half true. What most people miss today is that intellectual challenge also includes the rigorous and tenacious work of developing and proving the ideas. Perhaps it’s the result of the TV generation’s upbringing, believing a mythology in which ideas develop instantly into full-blown outcomes.

The intelligent, articulate conceptualisers don’t necessarily understand how to execute. Many don’t realise what needs to be done to convert a vision into specific tasks, because their high-level thinking is too broad. They don’t follow through and get things done; the details bore them. We all have great ideas, few manifest them!

Judging from our observations, a high proportion of those who actually rise to the top of a business organisation have made their mark-their personal “brand”as high-level thinkers. They are the kind of people who get caught up in the intellectual excitement of each new big idea that comes out and adopt it with enthusiasm. They are articulate conceptualisers, very good at grasping strategies and explaining them. But struggle bringing them to life!

The leader’s personal involvement, understanding, and commitment are necessary to overcome this passive (or in many cases active) resistance. She has not only to announce the initiative, but to define it clearly and define its importance to the organisation.

Again, she can’t do this if she can’t understand the problems that come with implementation, talk about them with the people doing the implementing, and make clear-again and again-that she expects them to execute it.

Clear, simple goals don’t mean much if nobody takes them -seriously. The failure to follow through is widespread in business, and a major cause of poor execution. How many meetings have you attended where people left without firm conclusions about who would do what and when? Everybody may have agreed the idea was good, but since nobody was named accountable for results, it doesn’t get done.

Review the progress of important efforts.

First you need to surface any conflict that could stand in the way of achieving results. Second, you need to create a follow-through mechanism, to ensure that everyone will do what they were supposed to.

How to be a good coach to get results:

The skill of the coach is the art of questioning. Asking incisive questions forces people to think, to discover, to search.

You don’t need a lot of complex theory or employee surveys to use this framework. You need to change people’s behaviour so that they produce results. First you tell people clearly what results you’re looking for.

Then you discuss how to get those results, as a key element of the coaching process. Then you reward people for producing the results. If they come up short, you provide additional coaching, withdraw rewards, give them other jobs, or let them go.

When you do these things, you create a culture of getting things done.

No one person has all the ideas or all the answers. If we have a problem in one place, people will respond by getting together and finding a solution, not by sitting around and moaning that they don’t have a solution or deciding to engage a consultant. We don’t expect people to know everything, but we do expect people to get the best answers they can get, and they get them by working with other people.

A good motto to observe is “Truth over harmony.” Candor helps wipe out the silent lies and pocket vetoes, and it prevents the stalled initiatives and rework that drain energy.