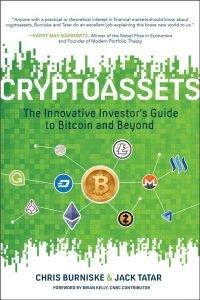 What you will learn from reading Crypto Assets:

– What smart contracts are.

– How to think about Ethereum and crypto commodities.

– The history of mass hystreia and the delusion of crowds.

Crypto Assets is the perfect introduction to some key concepts in the crypto space. It also adds some important historical context to mass delusions and misallocation of capital. If you’re interested in what’s going on in the crypto space and thinking of investing then this is the book for you.

What are smart contracts:

Smart contracts are critical to understand but have a misleading name. The first thing people think of when they hear smart contracts is legal documents that think for themselves, which misses the mark by a wide margin.
We believe smart contracts are better thought of as conditional transactions because they refer to logic written in code that has “IF this, THEN that” conditions. For example, it can easily be programmed in a smart contract that “IF Jack misses his flight and IF it was the airline’s fault, THEN the airline pays him the cost of the flight”

The reason Bitcoin developers haven’t added extra functionality and flexibility directly into its software is that they have prioritized security over complexity. The more complex transactions become, the more vectors there are to exploit and attack these transactions, which can affect the network as a whole.

Ether is a necessary element-a fuel-for operating the distributed application platform Ethereum. It is a form of payment made by the clients of the platform to the machines executing the requested operations. To put it another way, ether is the incentive ensuring that developers write quality applications (wasteful code costs more), and that the network remains healthy (people are compensated for their contributed resources).
Most cryptotokens are not supported by their own blockchain. Often these cryptotokens operate within applications that are built on a cryptocommodity’s blockchain, such as Ethereum.
To continue with the Apple analogy: applications in Apple’s App Store don’t have to build their own operating systems, they run on Apple’s operating system. Due to Ethereum’s wild success, other decentralized world computers have popped up, such as Dfinity, Lisk, Rootstock, Tezos, Waves, and more that can support their own dApps. Just as many altcoins tried to improve upon Bitcoin, these platforms are cryptocommodities that aim to improve upon Ethereum’s design, thereby attracting their own dApps and associated cryptotokens.

Liquidity and the order book:

The thinness of the order book is also referred to as the liquidity of the market. If the market is highly liquid, then there are lots of orders and many of them are likely large.
In this case, value can be traded easily. If the market is illiquid, or thin, then sizeable price swings with low volume will occur because someone trying to buy (or sell) a lot of the asset will fill all the available sell (or buy) orders, which drives the price up (or down), As a result, in thin or illiquid markets, when investors are bullish they can drive massive swings to the upside, just as when investors turn bearish, strong selling volume can quickly drive the price down.

While it’s a great validation of cryptoassets that regulators are working to provide clarity on how to classify at least some of them, most of the existing laws set forth suffer from the same flaw: agencies are interpreting cryptoassets through the lens of the past.

Equities, which many consider to be transacted on the most transparent, efficient, and fair markets in the world, had a rocky first couple of centuries.
Yes, centuries. Not only were these markets prone to mass speculation, as people raced to buy and sell based on mostly fabricated rags-to-riches stories, but many times the markets were rigged against participants. Misleading prospectuses, manipulation of share prices, false accounting, and issuance of forged paper shares all led to losses. The reality is that some of the most trusted markets in the world today also had Wild West beginnings.

Speculators and there use:

While speculators have often been scorned, they were perhaps most famously denigrated by Franklin D. Roosevelt in his inaugural address on March 4, 1933. As America was struggling through the Great Depression, many pinned on the stock market crash of 1929, there was strong resentment against speculators. Every crisis loves a scapegoat. In his speech, Roosevelt called them “money changers” to invoke religious judgment:
“Faced by failure of credit they have proposed only the lending of more money. Stripped of the lure of profit by which to induce our people to follow their false leadership, they have resorted to exhortations, pleading tearfully for restored confidence. They know only the rules of a generation of self-seekers. They have no vision, and when there is no vision the people perish.The money changers have fled from their high seats in the temple of our civilization. We may now restore that temple to the  ancient truths. The measure of the restoration lies in the extent to which we apply social values more noble than mere monetary profit.”
When it comes to innovation, such as the introduction of railroads, automobiles, or the Internet, speculation served to allocate money to the rapid buildout of the infrastructures necessary to support these sweeping innovations. Speculators are the ones who first allocate money because they have the highest tolerance for risk and are always on the lookout for new information.
While speculation typically ends with a supply glut because too much money eventually pours into the innovation, the glut is often temporary.

The Delusions of Crowds:

These characteristics are dangerous in the context of a market. Credulity, or to be more direct, gullibility, leads the masses to readily believe what they are told, whether by fellow speculators or the management behind different assets coming to market.
Credulity is often what draws individual speculators to the crowd, and once there, the speculator is trapped within groupthink. The four characteristics of persuasion Le Bon mentions only exacerbate the situation:
Affirmation leads the credulous to more strongly believe in their strategies when the market continues to go up, and that thinking spreads like a contagion. This pattern is repeated, again and again, as the speculators chase the returns of the most prestigious of assets. Unfortunately, when the market turns and the prestige is gone, the contagion of terror spreads just as quickly through the speculative crowd.

It all came crashing down in February 1637. Spring was approaching, and tulips would be blossoming soon. Contractual dates would soon require the conversion of the notes of credit into real money. The merchants that drove the economic machine were largely unaffected, because they had “continued investing their trading profits in town houses, East India stock, or bills of exchange.”18 While it was the wealth of these merchants that caused the masses to yearn for similar riches, the merchants were unscathed by the crash they precipitated. The crash did not set off a recession throughout the economy, which was one saving grace of Tulipmania.
In times like these (as in Tulipmania), many subscribe to the “greater idiot” ideal: people can make money so long as they are able to sell the asset at a higher price to an idiot greater than them. A key indicator of the unsustainability of mass speculation is when new and inexperienced entrants stream into the markets.

To make matters worse, when markets are overheating is usually when misleading asset issuers, Ponzi operators, and market manipulators come out to play. For that reason, we’ll turn to these three themes in the next chapter.

As activity grows in the bitcoin and cryptoasset markets, investors must look beyond the madness of the crowd and recognize that there are bad actors who seek easy prey in these young markets. The growth of new cryptoassets and new investment products around them create a rapidly evolving marketplace in which financial criminals can exploit profit-seeking motives, especially if the innovative investor doesn’t perform proper due diligence.

Don’t base investments on market interest:

The intent is to lure unknowing speculators to take the bait and buy the asset based on what they think is genuine market interest. The innovative investor who does due diligence would never buy solely based on market interest, and for good reason. The colluders will slowly work to exit their positions, while the inertia of enthusiasm leads more unknowing speculators to continue buying, as we saw with Gould. These pump-and-dumps, or P&Ds, are unfortunately becoming common in the smaller cryptoassets.
In closing, there are many tricks of the trade, whether it be mass speculation, misleading asset issuers, Ponzi finance, or cornering, with much of it justified by “this time is different” thinking. However, these are not new tricks-they have existed for centuries and in all asset classes. The best way for innovative investors to avoid these traps when considering cryptoassets for their portfolio is to perform proper due diligence on the fundamentals and ignore the whims of the crowd.