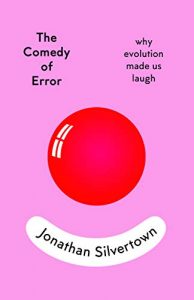 What you will learn from reading The Comedy of Error:

– How jokes work and why they are funny.

– How laughing is intertwined with playing across animal species.

– How humour can be seen as a sexual selection mechanism.

The Comedy of Error Book Summary:

The comedy of error is a short and sweet book about humour. It starts by explaining what humour and jokes are, before delving into why they play an important role in bonding and play. If you’re interested in the formula for making people laugh or you’re just interested into why we laugh and what purpose it may serve then this is the book for you. This book also contains loads of great jokes and one-liners. A useful resource for people looking for jokes to use!

Every joke involves a punchline that upsets a preconceived notion. The joke itself may establish the preconception with a set-up such, before immediately breaking this pre-conception with a witty remark. In a one-liner, the set-up may already be in the culture and the punchline exploits that.

Jokes that work on a set-up that you are already carrying in your head can subversively expose prejudice in the hearer:

For example: What do you call a black aircraft pilot? A pilot.

The incongruity hypothesis explains many of the properties of humour. First, it explains why humour can be so subjective. What might seem funny to one person may leave another struggling to see the joke because they do not have the same expectations and experience.

The incongruity hypothesis can also account for why explanations ruin jokes. An explanation pricks the balloon by turning mad reason into just plain reason. To be funny, incongruity needs to be resolved by colliding two incompatible interpretations, but by explaining a joke you are making the different interpretations compatible and so the humour evaporates. Repeating a joke can have the same effect because once we have heard it, the incongruity becomes part of what we expect from the world.

The different parts of the brain connect in a neural circuit that runs: incongruity detection → incongruity resolution → feeling of amusement.

Freud wanted his psychoanalytic theory to account for the way that jokes playfully juxtapose sense and nonsense, first puzzling and then enlightening the listener. These are indeed elements that can be recognised in most jokes. The set-up is the puzzle and the punchline is the enlightenment. Freud concluded that the pleasure in jokes comes from a kind of mental catharsis delivered by the punchline.

Though humour can undoubtedly be cathartic, according to Freud’s theory people would laugh less and less during a Marx Brothers’ movie as their sense of humour is purged. In reality, the reverse happens.

Every comedian recognises the need to warm up an  audience. Once you are in the mood, you are much more likely to laugh at the next gag.

There is a high importance of cognition in humour. You need to pay attention to the joke and allow the story to build a picture in your mind, while all the time you are trying to make sense of this developing image.

In the end, the elements are the same as in any joke: incongruity, absurdity, a set-up and a punchline, but the long narrative clearly requires the listener to do a lot of the work. That’s why you feel duped at the end. All jokes require work on the part of the listener.

Why do animals vocalise when playing? The likely answer is that, since play is a social interaction, the vocalisation is a signal to playmates that your intentions in tickling or chasing are not threatening.

This function of laughter in play may be why laughter is contagious, because the recipient of the signal must agree and reply, ‘I’m playing too.’ Repeating the laugh you have just heard enables you to join in the fun.

The signal of play:

A more scientifically minded study of dogs found that they do display characteristic facial expressions when playing, but that the muscles involved in a dog’s happy-face are different ones to those used in a human face displaying the same emotion. This is not a trivial conclusion, since it means that play and signalling emotional state to playmates has evolved in a wide range of animals, but that this is achieved by different means in different species. In other words, what is universally important is signalling non-hostile intent, rather than the precise means of doing this.

The Smile of Victory is social:

People participating in sports events smile with pleasure when they score, right? Actually, studies that film exactly what players’ faces are showing at the moment of triumph reveal that they very rarely smile. The smile comes afterwards, when the player turns to the crowd or to the team.

Humour is generated by the resolution of incongruity between expectation and sensory data. This is a kind of de-bugging mechanism, but that cannot be the main function of humour since it is only triggered by incongruities that are non-threatening. An alternative hypothesis that is supported by a wide range of data is that humour is a public display of cognitive ability favoured by sexual selection through mate choice.

Humour became a trigger for laughter much more recently, but it built on another pre-existing function of the brain: error detection. Curiously, we only laugh at trivial errors, or incongruities, because laughter is not about survival but seduction, not about defence but display. Sexual selection is the key: humour is a demonstration that you have the wits to woo.