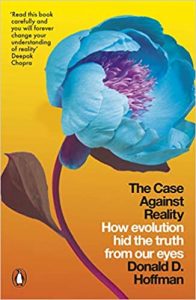 What you will learn from reading the Case against Reality:

– Why our brains prioritise fitness over truth.

– Why the fact we perceive colour illuminates that we don’t perceive the world objectively.

The Case Against Reality Book Summary:

The Case against reality can be summed up succinctly. We are participants in the creation of reality, we operate using a species specific user interface which selects information that’s out there and condenses it into information that guides our action. If this doesn’t mean much to you now it will by the end of this book summary. Get ready to rethink the way you see reality!

How we perceive the world:

That is what evolution has done. It has endowed us with a human operating interface. It has created senses that hide the truth and display the simple icons we need to survive long enough to raise offspring. Space, as you perceive it when you look around, is just your  desktop-a 3D desktop.

Apples, snakes, and other physical objects are simply icons in your 3D desktop. These icons are useful, in part, because they hide the complex truth about objective reality. Your senses have evolved to give you what you need. You may want truth, but you don’t need truth. Perceiving truth would drive our species extinct. You need simple icons that show you how to act to stay alive. Perception is not a window on objective reality. It is an interface that hides objective reality behind a veil of helpful icons.

The biological assumption of consciousness:

What is the biological basis of consciousness? This is the question that the Helmholtz Club pursued. It is the mystery that researchers around the world still struggle to solve.

Note how Science states the question: What is the biological basis of consciousness?

To the untutored intuition, it seems unlikely that consciousness can be split with a scalpel. What could it mean to split my feelings, my knowledge, my emotions, my beliefs, my personality, my very self? Most of us would dismiss the idea as ludicrous. But to Sperry, after years of careful experiments, the evidence was clear: “Actually the evidence as we see it favours the view that the minor hemisphere is very conscious indeed, and further that both the separated left and the right hemispheres may be conscious simultaneously in different and even conflicting mental experiences that run along in parallel.”

The false assumption of reality:

What false assumption bedevils our efforts to unravel the relation between brain and consciousness? Hoffman proposes it is this: we see reality as it is.

Of course, no one believes that we see all of reality as it is. Physicists tell us, for instance, that the light we see is a tiny fraction of an immense electromagnetic spectrum that we can’t see-including ultraviolet, infrared, radio waves, microwaves, X-rays, and cosmic rays. Some animals perceive what we cannot: birds and bees see ultraviolet; pit vipers “see” infrared; elephants hear infrasound; bears smell distant carcasses; sharks “feel” electric fields; pigeons navigate by magnetic fields.

But most of us believe that, in the normal case, we accurately see some of reality as it is.

Colour can’t be accounted for by light waves:

Crick was also influenced by Schrodinger’s thoughts, in that same book, about conscious experiences: “The sensation of colour cannot be accounted for by the physicist’s objective picture of light-waves. Could the physiologist account for it, if he had fuller knowledge than he has of the processes in the retina and the nervous processes set up by them in the optical nerve bundles and in the brain? Hoffman does not think so.

According to standard accounts of evolution, payoffs can vary wildly while the true state of the world remains fixed. It follows that seeing truth and seeing fitness are two distinct strategies of perception, not one strategy seen in different lights. The two strategies can compete. One may dominate and the other go extinct. So it is a central question, not a conceptual mistake, to ask: Does natural selection favor perceptions tuned to truth or to fitness?

Instead, Truth goes extinct because it hunts reality rather than fitness, like a chess player who hunts rooks rather than the king.

Perception is not about truth, it’s about having kids. Genes that fashion perceptions that help us raise kids are genes that may win the fitness game and elbow their way into the next generation.

The FBT Theorem tells us that winning genes do not code for perceiving truth. ITP tells us that they code instead for an interface that hides the truth about objective reality and provides us with icons-physical objects with colours, textures, shapes, motions, and smells-that allow us to manipulate that unseen reality in just the ways we need to survive and reproduce. Physical objects in spacetime are simply our icons in our desktop.

This molecule is vanillin. We perceive it as the delicious taste of vanilla.

Who could have guessed? So far as I can tell, the taste of vanilla in no way describes that molecule. Indeed, no taste describes any molecule. Tastes are mere conventions. Yet tastes usefully inform our choices of what to eat, choices that could mean life or death.

We are participants in the creation of reality:

Wheeler claimed that, “What we call ‘reality,’ consists of an elaborate papier-mâché construction of imagination and theory filled in between a few iron posts of observation.”  We don’t, according to Wheeler, passively observe a preexisting objective reality, we actively participate in constructing reality by our acts of observation. “Quantum mechanics evidences that there is no such thing as a mere ‘observer (or register) of reality.’ The observing equipment, the registering device, ‘participates in the defining of reality.’ In this sense the universe does not sit ‘out there.”

First, let’s look at data compression. A fitness-payoff function can be complex, and many fitness-payoff functions are typically relevant to my survival, so the amount of information about fitness that’s pertinent to me could be enormous-overwhelming if I had to see it all. I need it compressed to a size I can manage. Spacetime and objects are, for human vision, that happy tradeoff.

Fitness-payoff functions can vary in hundreds of dimensions. Human vision, shaped by eons of natural selection, compresses them into three dimensions of space and one dimension of time, and into objects with shapes and colours.

As a window on fitness, colour is not flawless, just adequate to guide actions that keep us alive long enough to reproduce. Colour, like each of our perceptions, compresses the complexities of fitness payoffs to bare essentials.

Every window has a bounding frame. The human eye only sees light with wavelengths between about four hundred and seven hundred nanometers-a minuscule fraction of the entire electromagnetic spectrum. This is not just data compression, it is data deletion.

Outside our tiny window of colour there are volumes of data about fitness, which we discard at our peril, including  microwaves that can cook us, ultraviolet rays that can burn us, and X-rays that can give us cancer. What we don’t see can, and sometimes does, kill us. But it usually does so only after we’ve raised offspring. So, to these perils that rarely impair our chance to reproduce, natural selection leaves us blind and vulnerable. Our perceptions tell us about fitness, but what they say is not veridical or unabridged.

Nuances of colour can trigger nuances of emotion that inform our actions in pursuit of fitness. Even plants, which may have no emotions, use nuances of colour to guide a variety of adaptive actions. The growth tips of some plants have photoreceptors that detect blue light and guide growth toward open sky.”

Colour perception has deep evolutionary roots. Discriminating colours is a powerful tool employed by millions of species to decode critical messages about fitness. It’s no surprise then that colours are firmly wired into our own emotions.

Patches of uniform colour are rare in nature. More frequent are combinations of colour and texture, called “chromatures,” which have a richer structure, can encode more data about fitness, and can trigger more precise reactions.

Vision, like a camera, recorded each detail, then this display might succeed; the data are all there. But vision is no passive camera. It is an impatient hunter for fitness payoffs. It may hazard an unrewarded glance or two at this display, but then give up and move on long before it chances on the key, but hidden, message about drying and venting.

Our perceptions are a species-specific user interface, not a window on truth, and its underlying code is a sea of kludges, punctuated by islands of inadvertent brilliance.

Vision does not approximate an ideal observer who recovers objective truths. It is an interface kludged together on the cheap. It tells us just enough about fitness to keep us alive in our niche long enough to raise kids.

This opens a world of possibilities, now largely untapped, for disruptive innovation in marketing and advertising. The eye of the shopper, like that of the beetle and moose, counts on shortcuts and tricks to guide its attention.”

Those who know its heuristics can lure it at will with well-crafted icons. The trouble, and opportunity, is that little is known of the tricks and shortcuts deployed by human vision to detect animate objects.

This suggests that an icon of food can enhance our memory for a product just as an icon of an animal can enhance our attention to it. Care must be taken, of course, to fashion an icon that succeeds at hacking into our visual code and masquerading as a high-fitness food. Get it wrong, and an icon can brand a product as unpalatable and unmemorable.9 Get it right, and an icon can go supernormal. Add a chromature of a high-end food, such as a honeycomb, and it may make the memory much stronger.