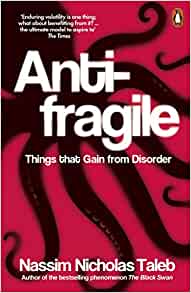 What you will learn from reading Anti-Fragile:

– What anti-fragility is and why it’s important.

– How to avoid being a sucker in life and to make sure you are ready for the unexpected.

– Some quick rules of thumb that can help you make better decisions.

Anything that has more upside than downside from random events is anti-fragile.

If you have more to lose than to benefit from events of fate then there is bad asymmetry.

Taleb also shows the different between certain occupations and their fragility. As an author, for example, nothing he can do that generates attention will reduce the sale of his books. As even negative PR will give him the attention needed to sell more books.

However, if you’re a midlevel executive at corporation and you punch a drunk in a bar you will likely get fired, get arrested, and be unhirable in the future. You’re extremely fragile.

Also, another occupation such as a taxi driver, you will have more freedom again because you are not so dependent on your reputation.

Taleb provides a heuristic: People who don’t seem to care how they dress or look are robust or antifragile. People who have to wear suits and ties and worry about a bad reputation are fragile.

Skin in the game:

Modern society is run with people with an absence of ‘skin in the game’. They are thus, anti fragile at the expense of others. Getting the upside of volatility, variations and disorder, exposing others to the downside. (Mutual fund managers)

There should always be disincentives for harm to others. Modern society has leaders who don’t have physical risks, where they have upside and no downside. No leaders fight in battle anymore. There is also no penalty for opinion makers who harm society.

Two rules for skin in the game:

-Betting against fragility is anti fragile

-What is wrong is quite robust, what you don’t know is fragile and speculative

Not being a turkey starts with figuring out the difference between truth and manufactured stability. As there is no stability without volatility. Modernity has caused this which is the large scale human domination of the environment and systematic smoothing of the world’s jaggedness and stifling of volatility and stressors. We seem to think we can ‘out-design’ mother nature.

The problems with modern Life:

We have have things too easy which weakens the will. Abundance is harder to handle than scarcity. As the richer you get the harder it becomes to live within your means.

Most humans squander free time. Free time makes us more dysfunctional, lazy and unmotivated. The busier you get the more active you will be at other tasks. (Parkinsons law)

Modernity has also led to a dependence on narratives, widening the difference between the sensational and the relevant. Thus, people don’t like hearing the truth as it detracts from their constructed narrative.

Stressors are information, in the anatomy system if muscles etc.. remain unused they deteriorate.

Children shouldn’t be kept away from stressors, as they won’t be able to deal with volatility and variations later in life. Habituation and safety leads to lack of stressors causing stagnation.

Deprivation is a stressor, plant based things should be eaten consistently and protein variably. (Think hunter gatherer)

There’s a mistaken desire to intervene, particularly from doctors, that can lead to “iatrogenics,” which means “harm caused by the healer.” This desire can be said to be constructed by a few key ingredients, such as a culture of defensive decision making.

Nassim points out that harm from doctors accounts for more deaths than any single cancer.

Intervention bias, it is easier to sell action than inaction. For example, doctors to justify their salary thus, they prescribe even when unnecessary. Other examples caused by conflict of interest where new equipment bought and need to justify interests.

In medicine near healthy patients given unnecessary medication. Only extremes where effect of convexity takes place should medicine be given. However, the legal system favours intervention, thus, if a doctor doesn’t act could be punished in retrospect. Other issue includes variability of information done by tests leads to unnecessary intervention. Iatrogenics comes from this intervention.

Better healthcare has led to sicker longer-living humans. This has been caused by ignorance towards second order effects. Such as support for the already established stifles the new.

React to real information not noise. Noise is supposed to be ignored and signals are what you need to find. The more frequently you look at data the more noise you are going to get. As there is a higher noise to signal ratio.

Therefore, only look at large changes in data or conditions, never at small ones.

It’s interesting as policies and procedures that fail are interpreted as product of poor forecasting rather than fragility of the system. If something is fragile, it’s risk of breaking means anything you du to improve it is inconsequential unless you first reduce risk of breaking.

The more options you have the more freedom you have to respond to unforeseen circumstances. Put yourself in a position to take advantage of your lack of knowledge. You need less knowledge about something with broader options.

Options like dispersion of outcomes and don’t care about the average much. (1000 true fans)

Option= Asymmetry + rationality (Keeping what is good and ditching the bad)

Simplicity is underrated, everyone searching for grandiose. As Buffet says “Better to be roughly right than precisely wrong.”

Simplifying is great, but distorting a situation to the point of being harmful isn’t. Proscutean bed where he stretches people into size of bed, fitting reality into pre-conceived narratives and ignoring information these situations are telling you.

Theory is the child of the cure, not the opposite. Thus, we don’t put theories into practices we create theories out of practice.

Green lumber fallacy – is mistaking a source of knowledge as a necessity.

Much of what other people know isn’t worth knowing

Evolution doesn’t rely on narratives, humans do. Narratives should be used for motivation not guidance and dependence. Little understanding is necessary just rationality at comparing two outcomes (optionality).

Economies of scale paradox – size hurts you at times of stress, just as large animals are more fragile to shocks (falls).

Bottlenecks are mother of all squeezes. Such as one fire exit in a hall for 1000’s. People always forget smooth functioning differs a lot from rough functioning.

The notion of averages is of no significance when it is fragile to variations. People tend to ignore anomalies. Variations are the second piece of information.

The more non-linear, the more the function of something divorces itself from the function. For example, if traffic was linear than increases in it would create effects with the same magnitude. However, this isn’t the case.

With a linear payoff you need to right more than 50% of the time, with convex payoffs you need to be right much less.

Taleb argues that the solution to most problems in life can be found by removing things, not adding things.

Bias towards action over inaction. Removal should be favoured over addition as latter makes things more complicated.

Good mostly comes from absence of bad, thus bad should be removed. Therefore, personal health can be mostly improved from removal of bad. (Cigarettes, sugar, trans fats etc..) Application to happiness reveals subtraction of things that make you unhappy leads to increased happiness.

Lindy effect – The old is expected to stay longer than the young in proportion to their age. For example classic books are still classic, thus, are more likely to be around in future then the new. Apply when deciding what to read, latest academic work tends to be just noise.

For the non-perishable ever additional day may imply a longer life expectancy. Whereas, timely material tends to become obsolete much quicker.

Postdictor phenomenon is when there is more postdictors than predictors of an event indicating hindsight bias. Using this logic never ask anyone for their option, forecast or recommendations. Ask them what they have and don’t have in their portfolio.

How to avoid being a sucker:

You reach anti-fraglitiy by not being a sucker. What is fragile will eventually break. Therefore, give weight to things that have survived.

Never ask someone what you should do, as them what they would do in your situation.

How many things to disregard in order to act, what’s the important information. If  you have more than one reason to do something don’t do it. As you are likely trying to convince yourself.

“Drop the story” – avoid fitting a narrative to what you are doing. A story is about significant events and memorable moments.