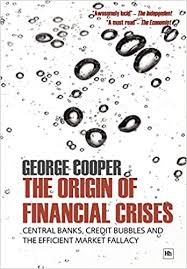 What you will learn from reading The Origin of Financial Crises:

– How the credit system works.

– Why Financial Crises happen and what leads to their cause.

– Why the government print money and what it means for investors.

The Origin of Financial Crises Book Summary is a fantastic book on how financial crashes happen! It explains in simple terms the role credit plays and how and why governments print money. If you’re new to the world of finance or just want to understand how the economic system works then this is the book for you!

The potential for a minor credit default to snowball into the collapse of an entire fund is an example of an inherent instability generated when an institution tries to combine the incompatible objectives of guaranteeing to return an investor’s capital, while, at the same time, putting that capital at risk.

The Evolution of Credit:

As the system evolved, the amount of bank-generated certificates of deposit eventually came to vastly outnumber those backed by real gold reserves. Therefore, even under the gold standard, the monetary system was predominantly secured on debt.

Private sector credit creation works like Heisenberg’s matter-antimatter pairs. Money and debt (antimoney) created in pairs, from nothing, live for a while and then vanish when they recombine. Taking out a loan creates a money-debt pair, paying off the loan destroys a money-debt pair.

Secondly, it helps clarify why some central banks worry so much about money supply growth; money growth also means debt growth, and it’s the debt that causes financial instability.

The Role of Central Banks:

If central banks are necessary because of an inherent instability in financial markets, then manning these institutions with efficient market disciples is a little like putting a conscientious objector in charge of the military; the result will be a state of perpetual unreadyness.

Central banks were introduced to stabilise the credit system but then found that their presence encouraged more risky lending and inadvertently destabilised it.

The advent of fiat money allowed for an entirely new mechanism of monetary creation. Governments had now

With this new ability to print, some governments printed more and more money, and used this to increase their spending. The extra government spending pushed up prices, and reduced the spending power of people’s wages. Workers demanded higher wages, companies provided these higher wages by putting up their prices. These higher prices in turn reduced the spending power of the government, who responded by printing itself still more money.

The commercial banks would therefore reduce their lending – an increase in printed money was to be offset by decreasing private sector credit creation.

Today we deploy Keynesian stimulus not when activity has already fallen, but instead when the rate of growth of the economy is slowing, or expected to slow.

If successful, this proactive version of Keynesian policy can avoid a recession altogether, or at least make it much shallower and less painful than it would otherwise have been.

However, the successes of pre-emptive Keynesianism means that borrowers are denied the opportunity to learn that their excessive borrowing was indeed excessive.

The Problem of Pro-activity – As each fledgling recession is successfully prevented by the government and the central bank, the private sector borrowers become progressively more confident and therefore willing to build up an even greater stock of debt.

In the real economy additional borrowing from whatever source will, all else unchanged, tend to boost corporate profits.

Of course the opposite is true of decreased borrowing, or increased savings rates, which tend to depress profits.

For this reason, if a central bank is working to maximise economic activity in the current period, it will tend to try to force down the savings rate of its economy.

Supporting demand through interest rate policy means one thing and one thing only: lowering interest charges to encourage more borrowing. However, as explained by the discussion of fractional reserve banking, more borrowing increases bank leverage, which in turn causes the type of financial fragility responsible for the sub-prime mortgage crisis.

The Problem with Saving:

‘Workers spend what they get, capitalists get what they spend.’

Consider what happens if we relax the ban on savings, and as a result the workers decided to save, rather than spend, some of their wages.

The revenue of Companies  would fall, by the amount of the savings and, as a result, the wages of companies would also fall by the same amount. These observations are the root of the first half of the quotation at the beginning of this chapter – ‘Workers spend what they get’ – if they don’t spend it they don’t get it.

As each successive attempted credit contraction is successfully counteracted with engineered stimulus, the economy is pushed into a state of ever greater indebtedness, presenting the risk of a still more violent contraction in the future.

The Difference in the Goods and Asset Markets:

Once the cycle turns negative, however, and asset prices begin falling, the stock of outstanding debt quickly looks excessive.

This is, of course, followed by the inevitable credit downgrades and the time-honoured witch hunt for culprits, who are often to be found in the credit rating agencies.

The problem with credit ratings, they are time stamped:

The Failure of the Efficient market theory:

The aim of the modern quantitative risk management system is essentially that of eliminating Knightian uncertainty through the collection and analysis of historical data. The premise of this industry is the Efficient Market Hypothesis’ teaching that future return distributions are knowable and non-Knightian.