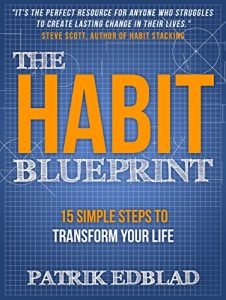 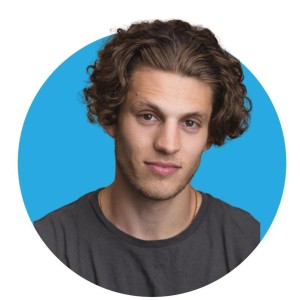 What you will learn from reading The Habit Blueprint:

– The mechanisms that are responsible for building new habits.

– How to build new habits and get rid of bad ones.

– How to set up a system that holds you accountable for doing your habits every day.

This book provides a simple 15-step guide to building good habits and eradicating bad ones. Patrik Edlab attempts to explain the neurological mechanisms behind the habit formation process before explaining how to build good habits and a system that can hold you accountable. If you’re looking for a quick read on how habits are formed or you just want to know the best tips and tricks for building them, this book is perfect for you!

50% of the things you do on any given day are the result of automatic decisions (habits).

When we don’t understand how habits work, we try to force behavioural change while relying on willpower. This inevitably wears out over time and with each failure, we become more discouraged until learned helplessness sets in.

Understanding how habits work means you can experiment with their component.

Some habits tend to “spill over” and create positive effects across all areas of your life. These are known as ‘keystone habits,’ e.g. Fitness helps sleep, focus, etc.

Make your habits so small that it doesn’t even require much willpower to start them.

Zeigarnik effect – our natural tendency to want to finish what we’ve started and not yet completed. Starting small takes advantage of this.

Make your habits so tiny that they can easily be completed every day without having to rely on willpower.

Sunk cost fallacy – can be defined as “the tendency to make decisions about the current situation based on what was previously invested in it.”

Use the sunk cost fallacy in your favour.

To create a new habit and make it stick, you need to decide on a very specific cue that reminds you to do it, over and over again.

Use implementation intentions – Write down when and where.

To use habit stacking write down a list of habits that you do every day without fail. Then go through that list and find the most suitable one to stack your new habit together with.

Celebrating immediately after a successful attempt to perform a habit can stir up positive emotions. When you do this, you reinforce the ‘feel good’ association and in turn the habit, making it more likely you will repeat it.

Experiment with different ways of celebrating until you find a way that successfully motivates you personally.

Step 6: Set up a Token Economy

Create a token that can later be exchanged for “backup reinforcers” in the form of actual rewards.

Create specific and measurable minimum daily quotas. Each time you successfully reach your minimum daily quota, reward yourself with a certain number of tokens. Then start stacking your tokens where you can see them every day to create an inspiring visual representation of your progress that you’ll want to keep building every day.

Set up your backup reinforcers. These are the rewards you get to exchange your tokens for. These should be rewards that help you get closer to your long-term goal.

If you achieve your daily quota, then provide yourself with visible tokens that can be added up to be redeemed for backup reinforces (rewards).

Schedule ten to fifteen minutes every week to examine the progress you’re making on your habit(s). Add up how many tokens you acquired over the week and exchange them for rewards.

Reflect on the days you missed and adjust your habit to make it easier.

Our surroundings heavily influence our behaviour, often without us being consciously aware of it.

Activation Energy – the bigger the obstacles standing in the way of your desired behaviour, the more activation energy you will need to muster up and the less likely you’ll be able to do it.

These obstacles can include, fatigue, anxiety, and a lack of discipline, which if present can lead to settling for something that, although less enjoyable, is more accessible.

Make the activation energy as low as possible.

When we procrastinate, it’s usually a result of us responding to our environment.

For bad habits or competing behaviours, raise the activation energy, and increase friction.

Identify the behaviours you could resort to, and increase their activation energy.

Step 10: Surround Yourself with Role Models

We are often unconsciously influenced by the people around us and what we value in them, especially if we are close to them.

Even the goals of people you don’t know can have a big impact on what goals you decide to pursue.

We are more likely to pursue a goal just by seeing someone else doing it.

It’s crucial to surround yourself with people who are similar, passionate and have similar goals.

The emotions and attitudes that other people bring to our relationships can influence our behaviour, so it is important to get them on board with our habit goals. The more supportive they are, the easier you will find the habit.

A commitment contract enables you to create self-imposed, immediate consequences for procrastinating.

Your contract should consist of three parts:

The Hawthorne effect – we perform better when we are aware we are being watched.

We want to make the right choice—as long as we don’t have to make it right now.

We often find loopholes, such as:

Get into the habit of asking, “Is this thought true, or is my brain simply seeking the path of least resistance?”

Build a habit chain as long as possible, but if you happen to break it, simply start a new one straight away.

Don’t ruminate over a missed attempt because stacking guilt and shame on top of what you perceive as a poor performance only makes it harder to get back on track.

When you miss a habit, change your lens of perspective and focus on the total number of days you completed it rather than the missed habit.

Celebrate what went well, forgive yourself for what didn’t, and then get right back into the action.