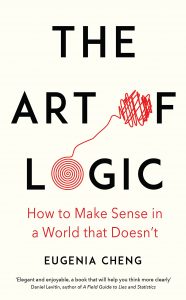 What you will learn from reading The Art of Logic:

– A understanding of the role of logic and abstraction.

– The building blocks to create a proof of something in a logical system, such as mathematics.

– The problems associated with knowledge and logic, thus understanding their limitations.

The Art of Logic Book Summary:

The art of logic book summary explores the fundamentals of mathematical logic and explains how it can help us see things more clearly.

If you’ve been curious about how maths works and what logic is, then this is a fantastic primer for you.

Logic involves both aspects of making something simpler. Forgetting details is the process of abstraction, where we find the essence of a situation and concentrate on it for a while.

Importantly, we must not forget critical details that would be simplistic rather than illuminating. And we only do it temporarily, so that we are not claiming to have understood everything, but rather, a central core on which all further understanding can be rooted.

Finding analogies involves stripping away some details that we deem irrelevant for present considerations, and finding the ideas that are at the very heart making it tick. This is a process of abstraction, and is how we get to the abstract world where we can more easily effectively apply logic and examine the logic in a situation.

Logic by itself has no starting point. It consists of a way of making deductions from things we already know. So we have to start somewhere in order to deduce anything logically. Limits are often thought of as being at the end, but there are also limits at the beginning.

Mathematics in school may well be mostly about numbers and equations, but higher-level mathematics is about how to think, and in this way it is applicable to the entire human world, not just the part involving numbers.

The rules of scientific discovery involve experiments, evidence and replicability. The rules of mathematical discovery do not involve any of those things: they involve logical proof. Mathematical truth is established by constructing logical arguments, and that is all.

Before we start a proof in mathematics we have to lay the groundwork very carefully, like setting up the rules for a sport. There are several aspects of this, and it’s illuminating to think about them because many arguments in real life go wrong because of problems with the groundwork rather than with the argument per se.

1. We should carefully define the concepts we’re talking about.

2. We should carefully state the assumptions we’re making.

3. We should carefully state exactly what we’re going to prove, in an unambiguous way.

Once we’ve laid the groundwork, the actual proof consists of a series of statements, each of which follows logically from what is already known to be true. This could either be the assumptions, known truths about the world we’re in, or previous statements in the proof.

When an argument breaks down because of problems of knowledge it might be in one of these ways:

Problems of logic in proofs include:

Gaps in the logic: leaping from one statement to another without justifying it, or leaving out too many steps in between.

Incorrect inferences: this is when a logical step is made that is actually incorrect, where you say something follows logically from something else, but it doesn’t.

Handwaving: arriving at a conclusion without true use of logic, but by metaphorically waving your hands around enough that people think you are.

Incorrect logic: there are many subtle ways that incorrect logic can get slipped into arguments as logical fallacies and we will examine some popular ones in some detail in the second half of the book.

People are often not very good at dealing with grey areas. There are many arguments in real life that turn into arguments about opposite extremes. If two people go to a concert together one might enthuse “That was great!” and the other refutes with “How can you think that? I thought it was terrible.” Political decisions usually result in some people saying it’s a great decision and everyone else saying it’s terrible.

Grey areas are an important part of the human experience, but are not very well dealt with by logic. Logic is about getting rid of ambiguity. The law of the excluded middle forces us to put the whole grey area in with black or in with white. That is better than the sort of black and white thinking that pretends the whole grey area doesn’t exist, but it can have the same effect as it can push people to think only the black or the white if they try to pursue logic to its rigid conclusion.