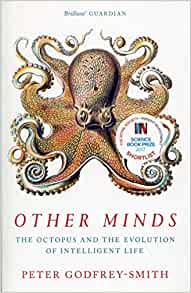 What you will learn from reading Other Minds:

– How our sense originated.

– The evolution of movement and behaviour in animals.

– Why consciousness can be seen as a playground and what this means.

Other Minds Book Summary is a deep dive into how evolution shaped intelligence and behaviour in animals. It argues that consciousness can be seen as a playground where streams of sensory information come to be integrated.

The book has a really interesting idea about the origins of sense, which came from monitoring change in the immediate chemical environment of bacterium. This meant that the bacterium had to have memory of the past to sense when a change had occurred. If this interests you then you’ll love Other Minds!

Origins of sense and behaviour:

In order for any organism to do this, one part of it must be receptive, able to see or smell or hear, and another part must be active, able to make something useful happen.

The bacterium solves this problem in an ingenious manner: as it senses its world, one mechanism registers what conditions are like right now, and another records how things were a few moments ago. The bacterium will swim in a straight line as long as the chemicals it senses seem better now than those it sensed a moment ago. If not, it’s preferable to change course.

Things don’t just have one role:

Light, for living things, has a dual role. For many it is an intrinsically important resource, a source of energy. It can also be a source of information, an indicator of other things.

Evolution of Movement and Behaviour:

What an amazing image: in a long evolutionary process, a motion-controlling brain marches up through your head to meet there some light-sensitive organs, which become eyes.

Then you face the task of generating a coherent whole-organism action from the many tiny outputs-the tiny contractions, contortions, and twitches-of your parts. A multitude of micro-actions must be shaped into a mаcro-action.

In the Cambrian, each animal becomes an important part of the environment of others. This entanglement of one life in another, and its evolutionary consequences, is due to behavior and the mechanisms controlling it. From this point on, the mind evolved in response to other minds.

With an influx of sensory information comes a need for complex internal processing. When more is known, decisions become more complicated.

The Brain as a ToolKit:

An analogy can be drawn with tool kits: brains are like tool kits for the control of behavior. As with human tool kits, there are some elements in common across many trades, but much diversity also.

All the tool kits found in animals include some kind of perception, though different animals have very different ways of taking in information. All (or almost all) bilaterian animals have some form of memory and a means for learning, enabling past experiences to be brought to bear on the present.

Sentience is brought into being somehow from the evolution of sensing and acting; it involves being a living system with a point of view on the world around it.

Subjective experience is intimately tied here to the interaction between behavior and sensory input. The moment to-moment feedback between sensing and acting affects how sensory input itself feels.

This, after all, is why we do much of what we do: to control what our senses will encounter.

What you sense next has two sources: what you just did, and what the larger world beyond you is up to. The overall shape of the cause-effect relations looks like this.

Consciousness is playground of integrated information:

Baars took as one of his starting points the idea that human subjective experience is integrated. Information from several different senses, and from our memory, is brought together to give us a sense of an overall “scene” that we inhabit and act in.

From there, the next step is to see that inner speech and its relatives provide a means for broadcasting, a way it can be done. Inner speech provides one way we are able to route things through our minds in such a way that information can be assessed and used. Inner speech does not live in a little box in your brain; inner speech is a way your brain creates a loop, intertwining the construction of thoughts and the reception of them.

The Two Streams of Visual Information:

They argue that there are two “streams” by which visual information moves through the brain.

The ventral stream, which takes a lower path through the brain, is concerned with categorization, recognition, and description of objects.

The dorsal stream, which runs above it, closer to the top of the head, is concerned with real-time navigation through space (avoiding obstacles as you walk, getting the letter through the slot).

Milner and Goodale argue that our subjective experience of vision, the feel of the visual world, comes only from the ventral stream. The dorsal stream does its work unconsciously, both in DF and in ourselves.

Once you accept that a frog does not have a unified representation of the world, and instead has a number of separate streams that handle different kinds of sensing, there is no need to ask what the frog sees: in Milner and Goodale’s words, “the puzzle disappears.”

Communication is a matter of sending and receiving, speaking and hearing, producing and interpreting-two complementary roles.