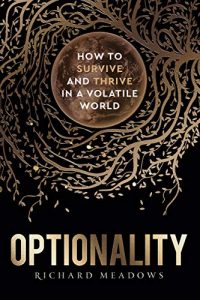 What you will learn from reading Optionality:

– What Optionality is and why it’s worth understanding.

– How to apply the barbell strategy to your life.

– Why you should always look for unique and under-explored opportunities.

Optionality is a deep-dive exploration into the concept of Optionality which was popularised by Nassim Taleb in his Incerto collection. Richard Meadows does a fantastic job of breaking down life into areas where optionality can be applied and explaining why it’s a crucial strategy in an uncertain world!

The optionality approach to getting lucky starts with identifying and capping the risks which might ruin your life. This gets you into the position of ‘not losing’, which is a major victory in and of itself: all you have to do is consistently not-lose, and you’ll come out well ahead of the pack.

The only way to ‘solve’ an intractable problem is to reject its assumptions. Alexander the Great, faced with the impossible task of untangling the Gordian knot, pulled out his sword and chopped it in half. And so, instead of getting lost in the labyrinthine branches of the possibility tree, we can draw our pruning saws and cut them off at the trunk.

And so, if we want to build optionality, perversely, we first have to deliberately constrain our choices.

These are variations on a very old idea: that constraints can be liberating. By restricting your choices along one dimension, you can create more freedom along a dimension that’s more important to you.

So the question is not what to cut. Our starting point is that everything gets cut, and has to earn its way back into consideration. The question is: what to load up on?

This, then, is the final rule for building optionality: you have to ignore what everyone else is doing, and think carefully about what is worth competing for.

High impact decisions and too much choice:

This is the part that’s hard to capture in the paradox of choice studies: the relevant reference class here isn’t ‘marinara sauce’—it’s the entire space of interesting or high-impact decisions, all of which draw upon limited attentional resources.

Consumer capitalism creates the illusion of great choice, but the branches of the possibility tree are almost all minor variations on the same core theme. This is Faux Optionality: an overwhelming array designed to keep us confined in one narrow sector of possibility-space, and obscure the decisions that actually matter.

The single most powerful way to open up your options in life is to a) have more money, or b) require less of it in the first place.

Frugality requires us to decide what is actually worth deliberating over in the first place—to choose what to choose.

Showy wealth is becoming the tell-tale sign of the insecure middle classes, while the true elite have already moved on to more sophisticated signals.

Happiness as an ongoing process:

We think of happiness as an outcome—reaching the shrine at the top of the mountain, where the chimera makes its lair. Instead, it’s an ongoing process—an instrument that measures the distance to various reference points, evaluates our success in relative terms, and propels us forward when the meter dips too low.

Living costs vs showing off:

In Spent, Geoffrey Miller calculates the ‘cost density’ of various products and commodities, and finds that the basic necessities of life—food, water, air, clothing, shelter—typically cost less than $5 per kilogram. His conclusion is that “living doesn’t cost much, but showing off does”.

Above the cost density of gold, you have diamond jewellery, Ivy League diplomas, and designer sunglasses. For the people who buy these positional goods, the eye-watering expense is not a cost, but a benefit: the whole point of the exercise is to set themselves apart from the masses.

With newfangled precision machinery, factories could manufacture near-flawless products en masse, priced so cheaply that even the lower classes could afford nice stuff. Rich people had to scramble to set themselves apart by shifting to a new set of status signals: brand names, antiquity, and strategic imperfection.

Making stuff is also an unusually wholesome signalling opportunity. Once you get to the point of not-sucking, handmade items become an effective way to display your intelligence, discernment, and other attractive traits. And the items themselves are imbued with an unusually rich source of meaning—my grandad’s pottery might not be perfect, but it’s worth immeasurably more to me than the smooth, perfectly symmetrical coffee mug I can pick up at Walmart for 99c.

It’s almost always a bad idea to give well-meaning advice to the people around you, unless they ask for it—and even then, tread carefully. Instead, all you can do is shut up and live your best life. If the results are compelling enough, people will get curious, and voluntarily start rewriting their own stories.

Social Capital and infecting ourselves with others desires:

Thankfully, social reality is not a monoculture. If we don’t like the dominant narrative, we can seek out pockets of people who share a different hallucination, and deliberately ‘infect’ ourselves with the norms and behaviours we want to mimic.

Building social capital makes it that much easier to gracefully bow out of bad signalling games. Whenever your health, wealth, or autonomy are on the line, that’s the time to be an uncompromising weirdo. In these domains, borrowing your desires from others is disastrous.

What stuff to invest money in:

Two categories of items cluster on the ‘best in class’ end of the barbell.

The first are the things you use every day: laptops, desks, phones, keyboards, and tools of the trade. If you cook a lot, you might invest in quality knives and pans. You spend a third of your life in bed, so don’t settle for a crappy mattress. The same goes for art, and other objects you interact with every day.

The second category includes anything with a risk of ruin. It’s never advisable to pinch pennies on helmets, protective gear, bald tires, condoms, or anything else that might be ruinous to your life and liberty.

The Matthew effect suggests popular things often become popular through what amounts to good luck, with an early breakthrough launched into the stratosphere by social contagion. Our opinions and preferences cluster together, but it’s not as if we’ve carefully evaluated the options on their merits and all come to the same conclusion. We just want to feel close to our fellow apes.

If our motive is to appreciate art, this is a real head-scratcher. But if our (hidden) motive is to signal that we are the kind of person who Appreciates Art, it makes perfect sense. Most of us don’t have the time or inclination to study art history, so we’ve settled upon a clearly agreed narrative that the Mona Lisa = Great Art. Go see it, snap a picture for proof, and everyone will be able to see how sophisticated and well-traveled you are.

The true costs of ownership:

There’s nothing virtuous about being a minimalist, but there is a tipping point where owning too much stuff closes off your options. The true costs and obligations often escape our notice, and include depreciation, maintenance, storage, insurance, security, and reduced mental bandwidth.

Look for unique or under-explored opportunities:

There is strong option value in seeking out experiences that are unique or under-explored. By contrast, the road well-travelled limits both the downside risk and the potential upside.

The main value of brand-name experiences is signalling. Be conscious of the trade-off between intrinsic enjoyment and external validation, and don’t get sucked into status games you didn’t want to play.

‘Health’ isn’t defined by the presence of anything in particular, but by the absence of problems: if you don’t have diseases, aches, pains, visible deformities, or clogged arteries, well, that’s about the best you could hope for.

I like Kevin Simler’s definition of friendship as a pact in which two people agree to dispense with all the usual fine-grained accounting of status transactions. That way you can play freely—including taking the piss out of yourself and each other—purely for fun, with nothing at stake.

The upside of blogs:

A friend suggested that blogs are part of our extended phenotype, and the image of a digital peacock’s tail that suggestively swooshes through cyberspace has stuck in my mind. Incredibly, it works. People write to me to share their triumphs and woes, to swap recommendations, to challenge my thinking, and to invite me into their homes for fine seafood dinners. I’ve met some of my closest confidants and friends as a direct result of blogging.

The upside of Praise:

Giving praise and gratitude is a ridiculously cheap option with unbounded upside. Instead of shilling for famous people who don’t need it and will never reciprocate, try to invest in young or talented people who are not yet well-known. Arbitraging this attentional inequality benefits you, them, and the world at large.

Video games and hits of achievement:

Superstimuli are examples of local maxima. A video game reliably serves up hits of achievement on cue, with a near-instant feedback loop engineered to be as ‘sticky’ as possible. There’s a clearly defined pathway for completing quests, levelling up into a muscle-bound hero, and impressing scantily-clad elven princesses with your very big sword.

Real life has unbounded payoffs, therefore there is no optimal solution:

Computer scientists solved the multi-armed bandit problem by coming up with clever algorithms which give us the ideal strategy for exploring and exploiting. But a volatile world throws a spanner in the works. When the payoffs of each slot machine change over time, you end up with a ‘restless’ bandit problem, which is intractable: it’s literally impossible to find the optimal solution. This is what real life is like. And our bandit is very, very restless.

Humphrey Bogart used to keep a $100 bill in his dresser drawer at all times—this being a decent chunk of change in the 1920s. He called it his ‘fuck-you money’, because it meant he’d never be forced to take a crappy part. According to Bogie, the only good reason for making money was “so you can tell any son-of-a-bitch in the world to go to hell”.

This trend only starts to make sense against the backdrop of the waning of the commons. In a world absent God or meaning, work is evolving from a means of material production to what Thompson calls a means of identity production. We’ve gone from ‘jobs’ to ‘careers’ to ‘callings’, mirroring the ascending needs of survival, status, and meaning.

Perhaps the best framing is Christopher Hitchens’ observation that there are no pain-free options: all we can do is choose our future regrets.