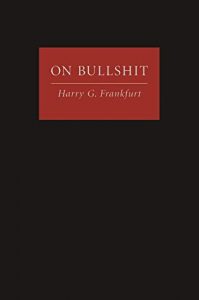 What you will learn from reading On Bullshit:

– The difference between bullshitters and liers.

On bullshit is a very short and funny exploration of the proliferation of people talking bullshit in the 21st Century. It’s really easy and short read.

It is impossible for someone to lie unless he thinks he knows the truth. Producing bullshit requires no such conviction. A person who lies is thereby responding to the truth, and he is to that extent respectful of it.

When an honest man speaks, he says only what he believes to be true; and for the liar, it is correspondingly indispensable that he considers his statements to be false.

For the bullshitter, however, all these bets are off: he is neither on the side of the true nor on the side of the false. His eye is not on the facts at all, as the of eyes the honest man and of the liar are, except insofar as they may be pertinent to his interest in getting away with what he says. He does not care whether the things he says describe reality correctly. He just picks them out, or makes them up, to suit his purpose.

Truth and lies are opposites:

The bullshitter ignores these demands altogether. He does not reject the authority of the truth, as the liar does, and oppose himself to it. He pays no attention to it at all. By virtue of this, bullshit is a greater enemy of the truth than lies are.

Bullshit is unavoidable whenever circumstances require someone to talk without knowing what he is talking about. Thus the production of bullshit is stimulated whenever a person’s obligations or opportunities to speak about some topic exceed his knowledge of the facts that are relevant to that topic.

This discrepancy is common in public life, where people are frequently impelled whether by their own propensities or by the demands of others-to speak extensively about matters of which they are to some degree ignorant.