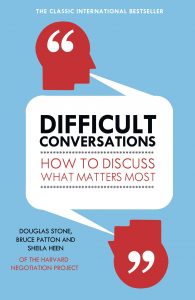 What you will learn from reading Difficult Conversations:

– What the three different types of difficult conversation are.

– How we translate and express our feelings in ways that aren’t always useful and what to do about it.

– How to understand arguments as a trading of conclusions.

Difficult conversations is a fantastic book on how to think about and navigate through the harder conversations we have in life. I think Douglas Stone, Bruce Patton and Sheila Heen have done an amazing job at making the advice actionable and easy to understand. A lot of the book is actually focused on making you realise the fallibility of your own perceptions and how a lot of arguments are caused by faulty assumptions that lead to conclusions.

If you’re interested in developing your communicating skills, then this is the book for you.

What is a Difficult Conversation:

The reality is, we communicate a lot less than we think we do. As George Bernard Shaw is credited with the quote, ‘The single biggest problem in communication is the illusion that it has taken place.’

In fact, the gap between what you’re really thinking and what you’re saying is part of what makes a conversation difficult. You’re distracted by all that’s going on inside. You’re uncertain about what’s okay to share, and what’s better left unsaid. And you know that just saying what you’re thinking would probably not make the conversation any easier.

1. The “What Happened?” Conversation. Most difficult conversations involve disagreement about what has happened or what should happen. Who said what and who did what? Who’s right, who meant what, and who’s to blame?

2. The Feelings Conversation. Every difficult conversation also asks and answers questions about feelings. Are my feelings valid? Appropriate? Should I acknowledge or deny them, put them on the table or check them at the door? What do I do about the other person’s Feelings?

3. The Identity Conversation. This is the conversation we each have with ourselves about what this situation means to us. We conduct an internal debate over whether this neans we are competent or incompetent, a good person or bad, worthy of love or unlovable. What impact might it have on our self-image and self-esteem, our future and our well-being?

Why we struggle to listen:

What this means is we can’t just assume someones intentions we need to find out from them what they were trying to do.

When someone makes a mistake:

When competent, sensible people do something stupid, the smartest move is to try to figure out, first, what kept them from seeing it coming and, second, how to prevent the problem from happening again.

Arguing is not only a result of our failure to see that we and the other person are in different stories – it is also part of the cause. Arguing inhibits our ability to learn how the other person sees the world. When we argue, we tend to trade conclusions -the “bottom line” of what we think:

But neither conclusion makes sense in the other person’s story. So we each disımiss the other’s argument. Rather than helping us understand our different views, arguing results in a battle of messages. Rather than drawing us together, arguing pulls us apart.

In the normal course of things, we don’t notice the ways in which our story of the world is different from other people’s. But difficult conversations arise at precisely those points where important parts of our story collide with another person’s story. We assume the collision is because of how the other person is; they assume it’s because of how we are. But really the collision is a result of our stories simply being different, with neither of us realising it.

We pay attention to different things:

Often we go through an entire conversation or indeed an entire relationship – without ever realizing that each of us is paying attention to different things, that our views are based on different information.

Two especially important factors in how we interpret what we see are (1) our past experiences and (2) the implicit rules we’ve learned about how things should and should not be done.

Our implicit rules often take the form of things people “should” or “shouldn’t” do: “You should spend money on education, but not on clothes.” “You should never criticise a colleague in front of others.”

Be Curious of Others:

Of course, in advance, we don’t know what we don’t know. But rather than assuming we already know everything we need to, we should assume that there is important information we don’t have access to. It’s a good bet to be true.

Certainty locks us out of their story; curiosity lets us in.

When we’re the ones acting, we know that we don’t intend to annoy, offend, or upstage others. We’re wrapped up in our own worries, and are often unaware that we’re having any negative impact on others. When we’re the ones acted upon, however our story too easily slides into one about bad intentions and bad character.

Look for contributions not blame:

At heart, blame is about judging and contribution is about understanding.

Given how frequently our assumptions are incomplete or wrong, the other person often feels not just accused, but falsely accused. Few things are more aggravating.

Focusing on blame is a bad idea because it inhibits our ability to learn what’s really causing the problem and to do anything meaningful to correct it.

Blame Is About Judging, and Looks Backward

Contribution is about understanding and looks forward.

Make Your Observations and Reasoning Explicit. To make sure that you’re working from the same information and understand each other’s interpretations, share, as specifically as you can recall it what the other person did or said that triggered your reaction.

By jotting down the things that triggered you to react, you are starting get a handle on the actions and reactions that make up the contribution system.

Beginning with “I feel… .” is a simple act that carries with it extraordinary benefits. It keeps the focus on feelings and makes clear that you are speaking only from your perspective.

Your feelings need not be rational to be expressed. Thinking that you shouldn’t feel as you do will rarely change the fact that you do.

“Well, it’s just easier not to rock the boat,” you think. “I don’t like it when they’re mad at me.” If you’re thinking this, then you are undervaluing your own feelings and interests. Friends, neighbours, and bosses will recognise this and begin to see you as someone they can manipulate. When you are more concerned about others’ feelings than your own, you teach others to ignore your feelings too.

Your feelings, at least for the moment, are an important aspect of the relationship. You can preface their expression with an admission that you are uncomfortable with these feelings, or that you aren’t sure they make sense, but follow that preface by expressing them. Your purpose here is simply to get them out. You can decide what, if anything, to do about them later.

We Translate Our Feelings Into

Judgments “If you were a good friend you would have been there for me.”

Attributions “Why were you trying to hurt me?”

Problem-Solving “The answer is for you to call me >> more often.”

Acknowledge others feelings before moving forwards:

What does it mean to acknowledge someone’s feelings? It means letting the other person know that what they have said has made an impression on you, that their feelings matter to you, and that you are working to understand them. “Wow,” you might say, “I never knew you felt that way,” or, “I kind of assumed you were feeling that, and I’m glad you felt comfortable enough with me to share it,” or, “It sounds like this is really important to you.”

Before moving on to problem-solving, you have a responsibility to yourself and to the other person to ensure that they appreciate the importance of this topic to you; that they truly understand your feelings; and that they value your having shared them. If they aren’t getting how important something is to flag it, then you are letting yourself down.

Three Core Identities There are probably as many identities as there are people. But three identity issues seem particularly common, and often underlie what concerns us most during difficult conversations:

Am I a good person?

Am I worthy of love?

Identity issues affect us all:

You can’t “quake-proof” your sense of self. Grappling with identity issues is what life and growth are all about, and no amount of love or accomplishment or skill can insulate you from these challenges. Seeing your husband cry when you tell him you don’t want to have another child, or hearing your coach say “Grow up” when you raise issue of discriminatory treatment on the team, will test your sense of who you are in these relationships and in the world.

What triggers an identity quake for you may not trigger one in someone else. We each have our own particular sensitivities. To become more familiar with yours, observe whether there are patterns to what tends to knock you off balance during difficult conversations, and then ask yourself why.

A great parable on Identity Quakes:

After observing O Sensei, the founder of Aikido, sparring with an accomplished fighter, a young student said to the master, “You never lose your balance. What is your secret?”

“You are wrong,” O Sensei replied. “I am constantly losing my balance. My skill lies in my ability to regain it.”

The biggest factor that contributes to a vulnerable identity is “all-or-nothing” thinking: I’m either competent or incompetent, good or evil, worthy of love or not.

As for everyone, what is true about you is going to be a mix of good and bad behaviour, noble and less noble intentions, and wise and unwise choices you’ve made along the way.

The primary peril of all-or-nothing thinking is that it leaves our identity extremely unstable, making us hypersensitive to feedback. When faced with negative information about ourselves, all-or nothing thinking gives us only two choices for how to manage that information, both of which cause serious problems.

Either we try to deny the information that is inconsistent with our self-image, or we do the opposite: we take in the information in a way that exaggerates its importance to a crippling degree. All-or-nothing identities are about as sturdy as a two-legged stool.