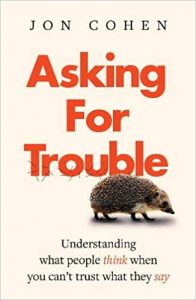 What you will learn from reading Asking for Trouble:

– Why asking people what they think creates an illusion of interest.

– Why whenever you ask something there’s always a sub text that people perceive.

– Why edgy ideas are highly likely to be rejected at first.

This was an interesting little book that I can’t quite remember how I stumbled upon it. This book is all about how to ask people for feedback on your ideas and how to find out what they really think. It’s a realistic lens on why asking peoples opinion often leans to being misled and misguided. A must read for anyone looking for feedback on ideas they have or who are going to undertake market research!

Celebrate honesty. People need to know you value truth. As the question asker, they will automatically assume you are also, at least to some degree, the idea owner – and they may well be right.  People are naturally closed. They tend to be reluctant to reveal their true feelings. Be patient, interested and encouraging. When someone tells you what they really think, thank them for their honesty.

Embrace contradiction. Often people start off saying one thing and contradict themselves later. Notice it, but don’t pick them up on it. It’s not a good idea to make people feel self-conscious. It’s your job to work out which is more important: the initial instinctive opinion or the more considered response.

You don’t have to accept peoples judgements:

It is a point so important it’s worth labouring. When you show people your ideas, you are asking them to judge. That is their job. But you don’t have to accept their judgement. That is your job.

We live our ideas. The longer we work on an idea, the further removed we become from the people we are trying to convince. That’s why we ask people what they think; to stay in touch with reality. Yet paradoxically, the very act of asking brings people into our orbit and closer to our own over-sensitised view of the world.

The Illusion of Interest:

At the very core of asking there remains one constant unerring truth:We cannot trust the response.

Whether we’re chatting via video from the safety of our own homes or sitting together in the same cosy living room by the seaside, when we ask people what they think of an idea, they focus. And the focus  changes their response. The stark reality is that the revised response may not just be a minor distortion of their true feelings, it may be completely wrong, diametrically opposed to the way they would feel about our ideas in the real world.

When evaluating an idea:

Typically, we want to know the following:

Purpose: What is the point of my idea? What does it do? What needs does it fulfil?

Relevance: Can you relate to the idea? How does it fit into your life? What does it mean to you?

Impact: Does my idea stand out? Is it distinctive?

Clarity: Do you understand the idea?

Belief: Is it credible? Will it do the job?

Personality: How does my idea come across? What are its values? How would you describe it?

Desire: Do you want my idea? Do you find it motivating? Would you buy it?

Society is obsessed with appeal. Likes, loves, thumbs up, thumbs down, smiley faces, sad faces all the time, everywhere. Often, ‘What do you think?’ is a thinly disguised synonym for ‘Do you like?’

We are dazzled and bewitched by appeal, and that is asking for trouble. It’s not that appeal doesn’t matter. It does. In the real world, we connect most with the things we like. The problem is the illusion that being liked in the world of asking is the same as being wanted in the real world. It is not.

The decisions we make based on how much people like our ideas are often wrong. People like the familiar and the similar. We prefer things not to change and avoid risk. When asked, ‘What do you think?’ we subconsciously choose to like the ideas that enable us to stay right where we are. To do nothing.

This has a couple of important implications:

1. The more your idea challenges the way people behave, the more unreliable ‘liking’ becomes. Given that we want our ideas to work, it doesn’t therefore, make much sense to be so hung up on such a poor indicator of success.

2. The spikey, jagged edges that differentiate your idea will almost certainly be rejected when you ask people what they think. In the world of asking, respondents will rub away rough edges to make ideas easier to accept.

You are never more relevant then when asking the question:

When you ask people to focus on an idea, you create an illusion of relevance. They intuitively consider what your idea means to them and the role it could play in their life.

By default, your idea becomes disproportionately relevant. Sadly, this newfound meaning has as much connection to real-world relevance as a kickabout in the park has to Barcelona vs Real Madrid.

An idea depends on relevance for its survival. ‘What does my idea mean to you?’ and ‘How does it fit into your life?’ are important questions that need to be asked. But disappointingly, there’s a downside. The act of asking inevitably makes an idea appear disproportionately relevant. If we do not, therefore, put the answer into the context of our audience’s lives, we are likely to be led astray.

The insights you seek are not grand, they’re not big and they’re not even clever. If you want to enhance the relevance of your idea, start with what people do, and listen little. Simple really.

Watch what people do:

It may not intuitively make sense that the solution to understanding what people think is so intimately wrapped up in what they do, but it is. There is an umbilical cord between the two. What people do is the lifeblood of what they think.

The failure to build the difference between real and imagined behaviour into the way in which we interpret response is an unsurprisingly common cause of asking gone wrong. After all, it’s harder to ‘Depend on do, if people can’t accurately recall what they’ve done.

When it comes to asking, there is one golden rule that takes precedence over all others:

If you need to frame, explain or justify your idea, you’re not asking, you’re selling. You’ve abandoned your quest for understanding in favour of a sale of goods or services.

To properly understand the clarity of your idea, you should keep the asking simple. If it takes time for the penny to drop, you need to find out why. Your primary task is to understand how you can remove the barriers that inhibit clarity and comprehension. If you set up, describe or explain your idea in a.way that clarifies its purpose, values or meaning, you are asking for trouble. Let your idea do the talking.

When you ask you promote the rational:

Asking encourages those being asked to use their heads rather than their hearts. In stark contrast to the unconscious, irrational drivers of behaviour in the real world, rational response dominates in the thoughtful world of asking. This dramatic shift in emphasis from emotional to rational thinking has an important consequence:

Asking for opinions artificially promotes the importance of proof.

When you ask people for their opinion, there are only three facts you need to know:

1. Requests for evidence and further information are sure signs of resistance and rejection in disguise.

2. Your product is your proof. If those you are asking don’t believe your idea without proof, then your idea is not believable.

3. If you work in marketing and find yourself believing your consumers need facts and stats, you should move to accounts, spend more time with excel spreadsheets, and leave the fun bit to someone who knows what they are doing.

Why the perfect sale isn’t a sale:

Asking people what they think of an idea sets up the perfect sale. The people being asked focus on the idea in question. They contemplate its pros and cons. They seek out its purpose. They consider how it could and would fit into their lives. Impact is assured. They take the time to work through any areas of uncertainty and confusion.

They listen attentively as the most convincing benefits are explained. Facts and further information support their newfound faith. And finally, they hone in on the subtle details that define the personality of the idea, that give it life. Then we ask, ‘Are you interested? Are you motivated? Do you want my idea?’ No commitment is required. No money changes hands.

There’s no pressure. All they have to do is say yes. It is the perfect imaginary sale, the greatest and the grandest illusion of them all. As the parent or promoter of an idea, it is so compelling to hear people telling us how much they like and want our baby that we quickly become divorced from reality.

In the world of asking, talk is cheap. Without a stake in the game, expressions of giving, clicking, sharing or buying are worthless. Action does not just speak louder than words; action is different to words. Words are illusions.

When we ask people what they think, intention is a wildly inaccurate measure of success. The further an idea is from the finished article, the more ridiculous claims of desire become.

The sub text of asking:

These are the unwritten rules of the game.

When someone asks us what we think, we are influenced by a myriad of cultural biases and psychological effects.

In behavioural science speak, we acquiesce, we social norm, we conform and we play the role of the good participant.

Being asked, ‘What do you think of my idea?’ is not really an ask, it’s a demand. A demand to be nice, to value, to be considerate, to care. In an instant, we process what is expected and required of us. We don’t try to behave differently, we just do. We are changed by the asking.

The world of asking is a richly textured land of lies, half truths, social niceties, self-censored responses, weighed-up opinions and introspection. It is a place where people play games. In doing so, they follow a well-established set of instructions and demands that are both explicit and implicit.

And that’s just for starters. Beyond the boundaries of our knowledge, understanding and control, there lies a further infinite realm of primed responses, hidden subtext and holding back.

All in all, there are only four reasons why we ask people what they think:

That is the acid test!

Before you ask people what they think, be honest with yourself about your motives for asking. They will define what you seek, how you seek it, how you listen, the illusions you fall for, how you interpret response and the path you choose to take. It is called composition bias.